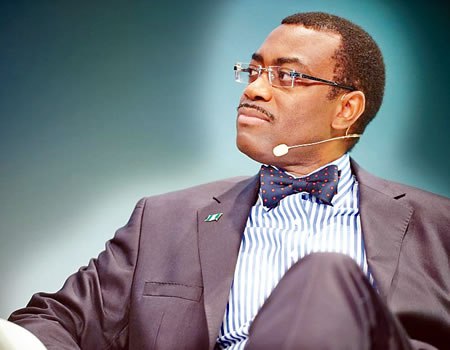 President of the African Development Bank (AfDB), Dr Akinwunmi Adesina has said there is an urgent need for Africa to rapidly diversify its economies, and add value to everything that it produces.

The AfDB president stressed that Africa exporting its raw materials had only led to vulnerabilities, adding that no nation or region had succeeded by simply exporting raw materials.

He pointed out that the economic and wealth divergence between wealthy developed and low income developing countries derived from their differential levels of industrial manufacturing.

Adesina said that Nigeria’s manufacturing gross domestic product hovered around seven per cent for decades and had not been able to recover its industrial manufacturing sector to unleash the fullness of its potential.

He said Nigeria’s approach had been on import substitution with the manufacturing sector representing only three per cent of total revenues from exports, but accounting for 50 per cent of imports.

He further explained that import substitution, while important, was a very restrictive vision.

“It looks toward survival, instead of looking to create wealth through greater export market and value diversification. The end result is a manufacturing sector that cannot develop nor compete globally, but limits itself to “survival mode”, not a “global manufacturing growth mode,” he said.

He, however, advised that Nigeria has a greater ambition for its manufacturing sector by integrating and rapidly moving up global and regional value chains in areas of comparative advantage.

He also said the country should drive greater specialisation and competitiveness.

“A well-developed and policy-enabled manufacturing sector, with an export orientation, will spur greater innovation, industrial policies for export market development, and structural transformation of the economy.”

He further stressed that the country’s focus should shift to expanding foreign exchange through enhanced export value diversification and be proactive.

He said that African countries, including Nigeria, have had policies, templates and programmes for industrialisation and expanding industrial manufacturing for decades.

The AfDB president, however, stressed the need to close the huge gap between policy ideas and implementation. Another point stressed by Adesina was for Nigeria to decisively tackle its energy deficiency and reliability so its industries would not remain uncompetitive.

“There should be massive investments in variable energy mixes, including gas, hydropower resources and large scale solar systems to ensure stable baseload power for industries to direct power preferentially to industries, and to support industrial mini-grids to concentrate power in industrial zones.

“In addition, we should develop more efficient utilities, reducing technical and non-technical losses in power generation, transmission and distribution systems.”

He further reiterated that Nigerian ports were not meant for revenue generation centres but they should support industrial manufacturing.

“We should move away from the usual Gestapo approaches of raiding ports, or deploying soldiers to decongest ports or even vehicular traffic to the ports. We should not be decongesting the ports in Nigeria, we should be transforming the ports. This must start with cleaning up administrative bottlenecks.

“Most of which are unnecessary with multiple government agencies at the ports, high transaction costs or even plain extortions from illegal taxes, which do not go into the coffers of the government.”

He added that the Africa Continental Free Trade Area (AfCFTA) presented a huge opportunity for Nigeria to drive an export-driven industrial manufacturing pathway.

He said Nigeria should respect the rule of law for illegal imports not to happen.

“The size of the free trade zone, with a collective GDP of 3.3 trillion dollars, makes it the largest free trade zone in the world by the number of countries.  We must be ready to seize the opportunity and become a key player based on our massive potential.”

According to him, there is the need for Nigeria to unlock its industrial manufacturing capacities to take advantage of the duty-free exports within the zone.

“Doing so requires decisively tackling the infrastructure and logistics bottlenecks that hamper industrial capacity and competitiveness.

He also commended the drive of the federal and state governments toward Export Processing Zones.

He advised that such zones move toward becoming Special Economic Zones, to allow for better clustering of firms, production sharing and learning platforms, for multiple industries.

“With the Africa Continental Free Trade Zone, Nigeria will face stiffer competition on the establishment of industrial manufacturing platforms.”

He further added that for the full impact of the zones to be felt, they should go beyond just being zones for duty-free trading between African countries.

“The African Continental Free Trade Area should, therefore, be a manufacturing zone, not just a trading zone.

“Otherwise, we would have succeeded in creating a well-organised consumption zone for imported raw materials, machinery and equipment from others.”

Furthermore, Adesina added that greater efforts would be needed in Nigeria to improve coordination failures, inter-agency cooperation, ensure the stability of the policy environment, and avoid policy reversals to assure investors.

He also advised that Nigeria enhances its readiness to transition to digitised and smart manufacturing.

“The future of manufacturing will be digital. The global digital economy is estimated to be worth over 16 trillion dollars.

“The use of Internet of Things (IoT) will raise the productivity of labour in manufacturing, deploy smart machines, manufacturing platforms and systems, connecting machines and people, and using machine learning and artificial intelligence to improve speed and efficiency of complex manufacturing processes.

“That future is already here. It is time to re-imagine industrial manufacturing in Nigeria.”

He also urged the Manufacturers Association of Nigeria to establish “Industrial Digital Skills Academies” and link them to universities and technology innovation hubs.

He said: “This will help reskill and retool workers to prepare for the jobs of tomorrow.”