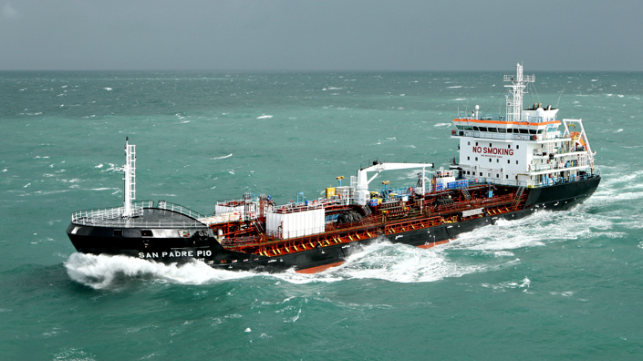 Swiss authorities announced that they have completed an agreement for the release of a Swiss product tanker that has been detained by Nigeria for over three years. The detention created an international incident that the Swiss had taken to the United Nation’s maritime court.

The product tanker MT San Padre Pio is registered in Switzerland and operated by a Swiss shipping company ABC Maritime, owned by Augusta Energy. The 7,600 dwt vessel was engaged in the company’s bunkering business in West Africa when on January 23, 2018, the vessel was intercepted by the Nigerian Navy. The tanker, which had been engaged in the ship-to-ship transfer of gasoil, was ordered by the Nigerians to sail to Port Harcourt, where it remains at anchor still under detention.

Nigerian authorities charged the vessel with smuggling diesel fuel and violating the Nigerian Exclusive Economic Zone. The owners and Switzerland denied all the charges, contending that the vessel was operating in international waters.

Efforts by the company and Swiss diplomatic efforts failed to free the vessel. The majority of the crew was permitted to leave, although four members of the crew remained aboard to maintain the vessel. Unable to reach a diplomatic solution, Switzerland filed a case before the UN’s International Tribunal for the Law of Sea, which is based in Hamburg.

Switzerland asked the tribunal to order the immediate release of the vessel, saying Nigeria was holding the vessel illegally and that the ship and crew were in danger. They reported that the ship had been attacked by the pirates in the region in April 2019.

The maritime tribunal in July 2019 said without deciding Nigeria’s claims that the vessel should be released. They ordered that a bond of $14 million be posted and that the vessel’s operators agree to return to Nigeria for future legal proceedings. The tribunal left open for a later decision the question of if Nigeria had violated international law with the seizure and arrest of the tanker.

The vessel’s operator, ABC Maritime, told SWI swissinfo.ch that it had successfully defended itself in front of the Nigerian High Court. They said that the vessel and its crew were acquitted as the court had found them not guilty.

Saying that the agreement between the governments of Switzerland and Nigeria calls for the immediate release of the tanker, Swiss authorities said they would terminate the legal proceeding that is still pending before the International Tribunal for the Law of the Sea once the vessel returns to international waters.