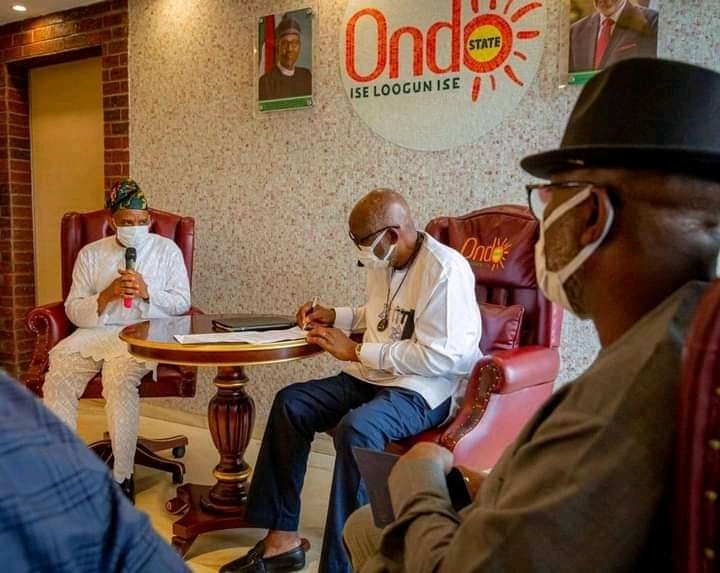 Ondo State Governor, Oluwarotimi Akeredolu, has sought the support of the Nigerian Maritime Administration and Safety Agency (NIMASA) for the establishment of the proposed Port Ondo.

This is even as the Governor expressed the readiness of the state to key into the blue economy initiative of NIMASA, urging the agency to help resuscitate Aiyetoro Technical School where he said many maritime experts were trained and produced.

Akeredolu spoke in his office on Tuesday while playing host to NIMASA’s management team led by the Director-General, Bashir Jamoh.

The Governor noted that the state has what it takes to have a deep seaport, adding that the sunshine state’s position is peculiar with the longest coastline in the country.

He said, “We are ready to be part of the blue economy. We can work together. You mentioned waste management, ferrying, fishery, shipbuilding, ship repair, and other areas.

“Aiyetoro Technical School was the first in West Africa to address these issues. It trained and produced so many maritime experts. It is comatose now. The town is almost washed away. Serious degradation! We will not mind if NIMASA can be part of the resuscitation.”

The Governor also decried the politicization of the development of the waterways, particularly the extension of the dockyard to the state.

According to the Governor, both China Harbor and Dubai Harbor have shown interest in the development of a deep seaport in the state, adding that they are only waiting for the port declaration.

“I am not particular about Ondo. We are particular about a port for West Africa. Here, we have the deepest draught. Over 60 meters. We do not need to dredge to build the port. Naturally, a port can be here. We have done the OBC. If what we are seeing in Lagos is not enough, where else can we do it if not Ondo State,” Governor Akeredolu said.

Speaking earlier, Jamoh commended Governor Akeredolu’s successes in his first tenure, noting that he has recorded giant strides in terms of road infrastructure in the state.

The NIMASA boss stressed that the agency is ready to liaise with Ondo State to develop blue economy in the state and take advantage of the state’s tourism potentials.