AMG Logistics is proud to be sponsoring "Emergence", celebrating the 10th year anniversary of Alexis Galleries. 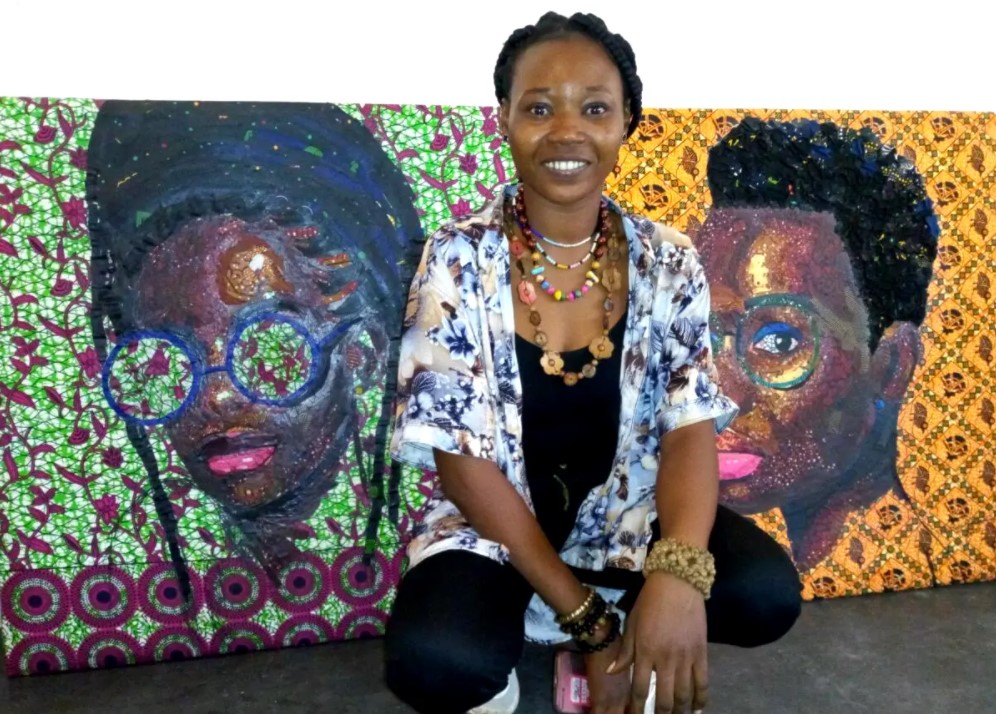 One of the Ibadan young artists, Bola Obatuyi, squatting before her works titled “Insight 1 & 2” (fabrics on canvas. 2021). PHOTO: Osa Mbonu-Amadi

They are 14 in number – all young and talented visual artists – featuring in the upcoming group exhibition of paintings and sculptures titled Emergence, designed to celebrate the 10th year anniversary of Alexis Galleries.

For a journalist covering the press preview of such an exhibition with 14 artists in attendance, it was a daunting task to capture their inspirations and works. But the founder and director of Alexis Galleries, Patty Chidiac-Mastrogiannis, came with a useful suggestion: “Look for the things the artists have in common,” she said.

Following Mrs. Chidiac-Mastrogiannis’ advice, the journalist notices that all the artists are from Ibadan. Secondly, they are all young and talented. Third, they were all trained by the famous artist, Oluwole Omofemi, who had also begun his career as a young artist at Alexis Galleries. Fourth, and most profoundly, black colour dominates their paintings – a symbol of Africa which the artists say they picked up from their master!

Explaining the choice of Ibadan artists, Mrs. Patty Chidiac-Mastrogiannis said for the 10th anniversary of Alexis Galleries, she had initially wanted to do a show to showcase the artists she started with 10 years ago, who are all successful artists now. But she later changed her mind and decided to do what Alexis started with and is known for – showcasing and mentoring young artists. The Ibadan young artists, she revealed, were suggested to her by Oluwole, a successful Ibadan-based artist.

As usual with Alexis, part of the proceeds from the exhibition will be donated to the Bricon Foundation, an NGO that supports patients and their families battling cancer.

AMG Logistics is a regular sponsor at Alexis Galleries for exhibitions such as “Destiny II“, “Talking Canvases” and “Synonyms Of Faces“