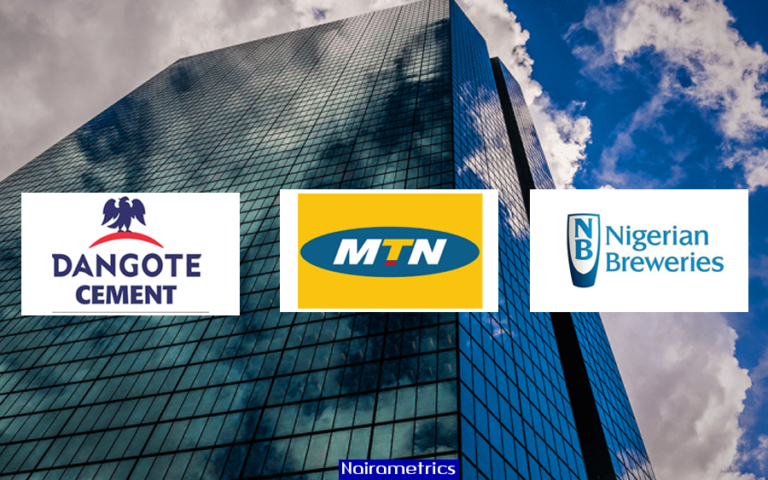 Corporate Nigeria brushed aside rising inflation rate and exchange rate crisis to record a surge in revenues and profits.

Blockbuster results:
An analysis of the financial statements of 32 of the most capitalized companies on the stock exchange (excluding commercial banks) revealed the companies recorded aggregate revenue of N5.9 trillion in the first 9 months of 2021 compared to the N4.69 trillion (or 26.0% increase) posted in the same period in 2020.

Corporate profits even did better. The companies collectively posted profits of N756.8 billion compared to N566.1 billion (or 45.1% increase) in the same comparative period respectively.
MTN, Dangote Cement, Flour Mills, Nigeria Breweries Nestle, Total, Julius Berger are some of the companies included in the list analyzed by Nairametrics. The companies make at least 90% of their revenues from Nigeria and also pay taxes locally.

The impressive performance was recorded across all sectors of the economy including oil and gas, food and beverage, brewery, cement, conglomerates, agriculture, and construction.

These blockbuster results are despite headwinds being experienced in the Nigerian economy, notably rising inflation, spiking unemployment and an exchange rate depreciation forced by the Covid-19 pandemic, crash in oil prices, insecurity and citizens battered by weakening purchasing power.

How did companies grow top and bottom lines?
In addition to macroeconomic conditions, the companies under our data set posted a total pre-tax expense including finance cost of N4.8 trillion up 22.4% year on year.

However, despite the above headwinds, overall margins were not adversely impacted, as Pre-tax margins rose to 18.4% (compared to 16% same period last year). The stellar results appear to have been achieved through a combination of frequent price increases, shrinkflation, targeted marketing and sales churn as the Nigerian economy reopened.

Specifically, with regards to reopening, the Federal Government lifted COVID-19 restrictions between May 2020, and finally lifted the border closure in December 2020.

Notably, the positive performance recorded by the companies aligns with second-quarter GDP data which saw Nigeria’s real GDP growth rate rise 5.01%, the fastest in about half a decade.

Whilst most analysts including Nairametrics attributed the GDP growth to base effects, it also reflects the wider resilience experienced by corporate Nigeria who have found methods to continuously adapt in a challenging political and economic environment. Nairametrics projects this trend of adaptation will persist towards the end of the year.

Finally, corporate Nigeria has also benefited immensely from a relatively low-interest rate environment and several intervention programmes instituted by the central bank. Allowing them to tap into the bond market for short and long-term debt, to source funds required for business expansion and reinvestment whilst increasing prices.

Tax implications
From a taxation perspective, the government has also benefitted immensely from the profit windfalls. According to the data reviewed, corporate taxes from these companies rose from N192.3 billion to N330 billion in the period under review. This also delivered an effective tax rate of 30% for the period.

Data from the National Bureau of Statistics reveal total company income taxes collected in the first half of 2021 was N570 billion, an increase when compared to N383.8 billion collected same period in 2020 when the country was severely hit by Covid-19.

The top performers
By overall revenue

Mobile telecommunication giant, MTN led the table as the highest revenue generating company with revenues of about N1.2 trillion in the first 9 months of the year and profits after tax of N220.3 billion. MTN also paid a tax of N101 billion out of its pre-tax profits.

Nigeria’s cement giant, Dangote Cement came second with a revenue of N1 trillion and a profit after tax of N278.2 billion.

The Consumer Goods sector showed the second-highest increase in revenues to N1.43 trillion from N1.07 trillion prior year, albeit PBT and PAT growth was subdued reflecting higher costs.

Notably, the breweries sector recovered to post profits in the 2021 period compared to losses before tax and losses after tax in the prior year.

Adjusted for exchange rate devaluations, the picture appears more subdued in impact than earlier highlighted. The current revenue of N5.9 trillion when adjusted for the current official rate of N410/$ is about $14.4 billion. However, the N4.69 in revenues when adjusted using N375/$1 is about $12.5 billion. Using a parallel market rate, however, paints a gloomier picture. Nevertheless, most of the companies have faired well despite exchange rate devaluations.

Nigerians carry the can
Nigerians are at the other end of the stick hanging by the thread daily as things go from bad to worse. Purchasing power is getting eroded as people spend more money on food, despite galloping food inflation. Wage increases have not kept up with inflationary trends even as some organizations cut jobs and even offer salary cuts.

But just like corporates, Nigerians have also become creative. The GIG economy has allowed most people to seek alternative income in job markets outside of Nigeria. Cryptocurrency traders have also created new wealth for Nigerians looking for returns in double digits. Ponzi schemes are also on the rise providing people with an avenue to get rich quick.

Diaspora Nigerians have also had a role to play in the economy through foreign remittances and investments in the real and financial sectors of the economy.

The Secretary-General of the International Maritime Organisation (IMO), Kitack Lim, has said the Nigerian Maritime Administration and Safety Agency (NIMASA) Marine Litters and Micro Plastic Action Plan will provide major support to ensure a clean and healthy ocean ecosystem not only in the Nigerian coastline but the entire region.

The Secretary General made this assertion in his goodwill message to the launch event of NIMASA’s Revised Marine Litters and Micro Plastic Action Plan held virtually at the agency headquarters recently.

Kitack Lim stated that the world is dependent on the rich ocean environment and international trade provided by shipping clusters and the protection of the ocean is vital to ensuring a healthy planet.
In Lim’s words, “Shipping must be balanced with the safety of life at sea, the long term health, and diversity of oceans and the conservation of the marine environment.

“Marine litter is a great concern and the discharge of garbage from ships has been prohibited since the 1980s by the MARPOL convention and additionally by the London convention with each protocol regulating and also prohibiting the dumping of plastics at the sea.”

The secretary-general said IMO, in cooperation with the United Nations Food and Agriculture Organization (FAO), and other relevant international organizations is striving to implement the IMO Action Plan on marine litters and to contribute to the global solution for preventing marine plastic litters from entering the ocean through ship-based activities.

Declaring the proper launch and take-off of the action plan, the Director-General of NIMASA Dr. Bashir Jamoh said 80 per cent of marine litters in the Nigeria environment originated from land-based sources.
According to him, NIMASA is committed to the reduction and elimination of unnecessary dumping and improper waste management and to ensure a cleaner and safer marine environment to support a healthier and sustainable human life.