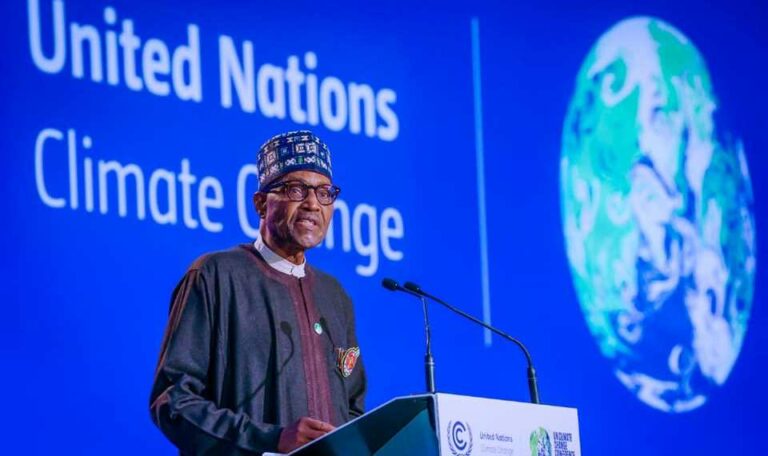 Many developing economies, including Nigeria, that rely majorly on fossil fuels may be prone to financial challenges in the coming days.

No doubt, oil drives Nigeria’s growth as it accounts for about 65 per cent of government revenue and more than 90 per cent of foreign exchange earnings.

In 2020, the country experienced its deepest recession in two decades, but growth resumed in 2021 as pandemic restrictions were eased and oil prices recovered, and the authorities implemented policies to counter the economic shock.

Though the battle for comprehensive economic revival has been a major focus of the President Muhammadu Buhari-led administration, the nation received a big shocker on Thursday when 25 countries and public finance institutions announced their commitment to ending finance for overseas fossil fuel energy projects by 2022.

They pledged to shift their attention to clean energy.

The announcement came at the occasion of the COP26 energy day at the ongoing United Nations Climate Conference in Glasgow, United Kingdom.

A statement jointly released by these parties, including the U.S., the EU, UK, and Canada, noted that the action was informed by the mission to align their international public support towards the clean energy transition and out of unabated fossil fuels.

The statement was also backed by five public banks, including the East African Development Bank and the European Investment Bank with a plan to mobilise $17.8 billion a year for the clean energy transition and keep 1.5°C alive.

The statement reads in part: “Our joint action is necessary to ensure the world is on an ambitious, clearly defined pathway towards net-zero emissions, that is consistent with the 1.5°C warming limit and goals of the Paris Agreement, as well as the best available science and technology.”

The statement said the countries will prioritise their support fully towards the clean energy transition, using their resources to enhance what can be delivered by the private sector.

“We will end new direct public support for the international unabated fossil fuel energy sector by the end of 2022, except in limited and clearly defined circumstances that are consistent with a 1.5°C warming limit and the goals of the Paris Agreement,” the statement added.

They further commit to encouraging more governments, their official export credit agencies, and public finance institutions to implement similar commitments into COP27 and beyond.

This includes driving multilateral negotiations in international bodies, in particular in the OECD, to review, update and strengthen their governance frameworks to align with the Paris Agreement goals. For government signatories, this will also guide their approach on the boards of multilateral development banks.

With this announcement, a lot of countries in developing economies that rely majorly on fossil fuels may be prone to financial challenges in the coming days.

Though the Nigerian president had made a net-zero emission target by 2020 with his country statement during the world leaders summit on Tuesday, current realities in the country do not favour that ambition.

The World Bank reported that Nigeria was highly vulnerable to the global economic disruption caused by COVID-19, particularly due to the decline in oil prices. Oil accounts for over 80 per cent of exports, a third of banking sector credit, and half of government revenues.

The number of Nigerians living below the international poverty line is expected to rise by 12 million between 2019 and 2023.

Experts have earlier raised questions on how realistic Nigeria’s commitment is.

In a previous article by PREMIUM TIMES, Chuks Okereke of the Climate Change and Development Centre at the Alex Ekwueme Federal University, Ebonyi State, had said it is good news that the president pledged a plan to achieve net-zero carbon emissions by 2060 but questioned where the numbers came from.

Days before the president made his speech, he had written an opinion article on October 30, on Newsweek daily magazine, calling world leaders that the energy solutions proposed to reduce greenhouse gas emissions by developed countries “must not be done rashly.”

According to Mr Buhari: “For today’s 1.3 billion Africans, access to low-cost and reliable energy is the highest of all possible concerns. Estimated to rise to 2.5 billion by 2050—by 2100 Nigeria alone is projected to have the second-largest population on the planet—this “great doubling” (for Nigeria, quadrupling) has the right to more dependable electricity than their forebears.”

Nigeria’s president warned that without extra and stable power, Africa cannot build the factories that will transform it from a low-job, extractives-led economy to a high employment middle-income continent.

“Children cannot learn for longer and better by battery light any more than by candlelight. No more than the Africa of today, the Africa of tomorrow cannot advance using energy production that intermittently delivers,” he wrote.

Speaking further, Mr Buhari said the most alternative of energy sources that the developed nations are introducing are often the most unreliable.

Apart from President Buhari, Nigeria’s Vice President, Yemi Osinbajo, has said in the same tone and sentiments that the decision of developed economies to defund the oil and gas sector is an unfair decision considering how much profits they have made from the sector before now.

Mr Osinbajo said after decades of profiting from oil and gas, a growing number of wealthy nations have banned or restricted public investment in fossil fuels, including natural gas.

He said such policies “often do not distinguish between different kinds of fuels, nor do they consider the vital role some fuels play in powering the growth of developing economies, especially in sub-Saharan Africa”.

He argued that although all countries must play their part in the fight against climate change, a global transition away from carbon-based fuels must account for the economic differences between countries and allow for multiple pathways to net-zero emissions.

“For countries such as my own, Nigeria, which is rich in natural resources but still energy poor, the transition must not come at the expense of affordable and reliable energy for people, cities, and industry. On the contrary, it must be inclusive, equitable, and just—which means preserving the right to sustainable development and poverty eradication, as enshrined in global treaties such as the 2015 Paris climate accord,” he said.

With Thursday’s statement by these countries to stop fossil fuel investment by the end of 2022 and the obvious financial crisis rocking the Nigerian economy, all eyes will be on Nigeria’s Energy Transition Plan that the president said was based on data and evidence and will be released to the public soon.