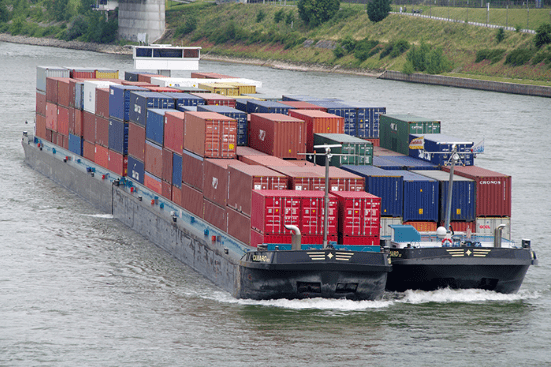 Members of the Barge Operators Association of Nigeria (BOAN) move no fewer than one million TEUs of containers and about 500,000 metric tonnes of general cargo from the ports in Lagos annually.  BOAN President, Edeme Kelikume, who disclosed this in Lagos on Tuesday during the 1st Annual Conference of the association, said the operators plan to double the figure “given the desirable enabling environment and support of all stakeholders”.

Kelikume said while commercial barging of cargo from the port has its teething challenges, BOAN members have contributed to reducing perennial gridlock on the port access road by taking some volume off the road.

He said, “BOAN as an association has become a child of necessity with the objectives of sustaining the barging industry as well as organising the activities of its members in a professional and efficient manner owing to the emergence of barging as a viable complement and alternative to road transportation, particularly in the wake of the perennial traffic gridlock along the Apapa port corridor which had resulted to our nation losing huge earnings due to port congestion and poor vessel turn around.”

The BOAN President listed regulatory, navigation, infrastructural and human capacity as some of the challenges militating against commercial barging operations in the country.

He said in spite of the challenges, “the future looks very bright for the industry to rise up to the occasion of contributing and revamping of our economy by improving the maritime sector and boosting revenue-earning especially in the export sector, as the nation prepares to take full advantage of the Africa Continental Free Trade Area Agreement (AfCFTA)”.

He called on the government to urgently embark on the removal of hazardous wrecks from the waters, sectional dredging and provision of navigational aids to ensure safety and smooth sailing of barges at all times.

In his address, the Minister of Transportation, Rotimi Amaechi, who was represented by the Permanent Secretary to the Ministry, Magdalene Ajani, lauded the activities of the association, which he noted, has served as a panacea to congestion at the port.

He, however, charged the operators to carry out their activities in line with the laid down rules and regulations that govern the operations.

“It is in this regard that the government is interested in discussions with stakeholders to ensure that barge operations are properly regulated and that those involved participate in their operation in line with the laid down rules and regulations.

“It is however disheartening to note that the congestion in the Lagos port is defying traffic measures and strategies put in place by the government to resolve the problem and ensure free movement of cargoes in and out of the port. Therefore, efficient barge operation is considered an efficient strategy to resolve the challenges.

“The ministry is committed to ensuring that maritime business is done in a secure and safe environment as NPA, NIWA, NIMASA, NSC and the terminal operators are called upon to draw up the standard operating procedure for the operation of barges,” the Minister noted.

Speaking earlier, former Managing Director of the Nigerian Ports Authority (NPA) Chief Adebayo Sarumi hailed the courage and doggedness of the association in ensuring decongestion at the port despite the poor infrastructure. Sarumi charged members of the association to look for options to fund their operations rather than rely on the government for financial support.

He also advised the members to consolidate in order to lessen the financial burden caused by the extremely expensive infrastructure required to run their operations.