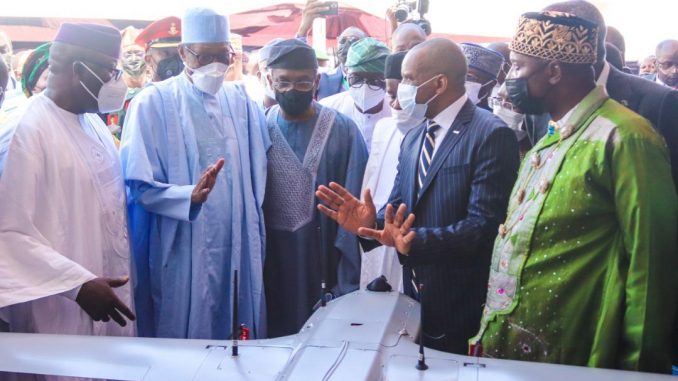 The President said that the country has over the years evolved a security strategy that would rid her waters of all forms of criminality.

He also disclosed that the country has secured 10 convictions for various maritime offences in the last two years when the SPOMO Act was signed into law in June 2019, adding that the official flag-off of the security project would further boost the Federal Government campaign to rid the country’s waters of all forms of crime.

‘‘I am confident that the project, which provides a robust maritime security architecture, will enhance maritime domain awareness capability and improve law enforcement action, particularly in the prosecution of suspects under the Suppression of Piracy and other Maritime Offences Act which I signed into law in June 2019.

‘‘This Flag-off is an important step in the continuing shift in strategic action about regional maritime security.

‘‘It will serve as a benchmark for member states in the Gulf of Guinea and other relevant stakeholders to further develop innovative strategies and align efforts with the subsisting framework to improve maritime security in the region,’’ he said.

He however called for greater synergy among member nations of the Gulf of Guinea to further boost Nigeria’s efforts to secure her waters and beyond, adding that the assemblage of the new maritime security assets was coming at a critical time when global discussions are centered on piracy activities and the new dimension it has taken in the region.

‘‘With shipping accounting for over 80per cent of transport requirements of the global economy, concerted efforts and innovative actions are required to address attendant security challenges.

‘‘Therefore, the flag-off of the project marks an important milestone in this regard and in our collective effort to tackle security challenges in the form of piracy and other maritime crimes in Nigeria and the Gulf of Guinea. It is also a demonstration of the government’s strong commitment to ensuring security.

‘‘This intervention, no doubt, will facilitate a conducive environment for the maritime sector to thrive and contribute to the diversification of the Nigerian economy,’’ President Buhari also said.

He commended the Ministers of Transport, Defence, the Chief of Naval Staff, the Director-General of NIMASA, members of the Steering Committee, the Project Management Team and all other government agencies and stakeholders who have worked together to make this initiative of the administration a huge success.

He also assured of the government’s commitment to ensure the sustainability of the project and also urged stakeholders to work collectively for the greater benefit of all Nigerians, member states of the Gulf of Guinea and the global maritime community at large.

Some of the assets for the project inaugurated include the Command, Control, Communication, Computer, and Intelligence Centre (C4i) for intelligence gathering and data collection for land operations; 16 armoured vehicles for coastal patrol; and about 600 specially trained troops for interdiction, known as Maritime Security Unit.

The President witnessed the demonstration of a range of assets to tackle maritime security, supervised the naming of two Vessels, Deep Blue Abuja (DB-Abuja) and Deep Blue Lagos (DB-Lagos) by the Minister of State for Transportation, Senator Gbemisola Saraki.

In attendance at the event were the Speaker, House of Representatives, Femi Gbajabiamila, Minister of Transport, Rotimi Amaechi, Minister of Works, Babatunde Fashola and the Director-General, Nigerian Maritime Administration and Safety Agency NIMASA, Dr. Bashir Jamoh, among several others.