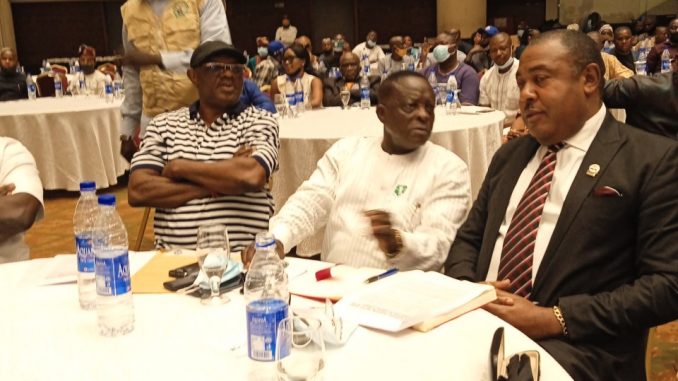 Freight forwarders who are contesting independently for seats in the Governing Council of the Council for the Regulation of Freight Forwarding in Nigeria (CRFFN) have again raised their concern about the evil the 6:6:1:1:1 sharing formula being spearheaded by the National Association of Government Approved Freight Forwarders (NAGAFF), Association of Nigeria Licensed Customs Agents (ANLCA) would do to the success of CRFFN Governing Council election.

They said the sharing formula is designed to deprive qualified independent contestants and to rig the election in favour of their stooges.  They maintained that the law which set up the CRFFN does not recognize accredited associations as parties to contest or vote but rather registered individual freight forwarders.

They said it is an aberration for these associations to dictate to CRFFN and the supervisory ministry how and in the manner they would conduct the election.

The independent contestants under the platform of the Concerned Independent Contestants for CRFFN Governing Council Election 2021 have urged the Minister of Transportation, Rotimi Amaechi to ensure that the election is conducted in line with the letter and provision of Act 16 2007 in a letter dated October 7, 2021, addressed to him on their behalf by Forwarder Chukwuemeka Godfrey Nwosu.

The letter reads in parts thus: Honorable Minister, what is known in the CRFFN Act via Regulation 2010 is the Accredited Freight Forwarding Associations in Nigeria; the CRFFN does not have the legislative powers to register associations.

Honourable Minister, it is an irony these industry political leaders are vehemently turning a professionally driven arena into a political theatre even doing so with impunity. The need to wield a professional hammer to instil professional discipline promptly cannot be overemphasized.

In furtherance to the actualization of their political arithmetic coded 6:6:1:1: the parties brought their nightmares to the fore when it noted that: “And for the records, it is important that we inform the Hon. Minister of Transportation that all of the so-called individual contestants are members of NAGAFF. Dr. Eugene Nweke and Dr. Increase Uche, for instance, are former and seating presidents of NAGAFF respectively. Both of them have been members of the council board”.

The truth is that they are merely afraid of these individuals professional disposition in the industry, especially in their insistence to evolve and sustain professionalism in the freight forwarding profession other than ambushing and tactically resisting every regulatory policy that will checkmate the excesses of Accredited associations especially in their current posture of hyping and parading themselves as above regulatory subjection. Funny enough, 85% of stooges being fronted in this political arithmetic are all seeking reelection into the Governing Council, so who is fooling who.

Honourable Minister, permits us, to set the records straight, sir, for all intents, character and regulatory purposes, Act 16, 2007 does not organize nor recognizes the accredited associations as a party to contest or vote in any CRFFN Governing Council Election.

In their usual display of arrogance, with a profound mentality of over Lords, they are so confident and preemptive of the Electoral Committee screening outcome, hence, they went ahead to flood the online industry platforms,  ports & terminal gates with their re-elect campaign posters.

Honourable Minister, we wish to urge you to support the permanent Secretary in her public statement and promise that the Governing Council Election shall be conducted in the letter and provision of Act 16 2007.

Honourable Minister, please do not take this unjustified ranting of parties who defaults in their accreditation and annual subscription fees.

Moving forward, the independent contestants advised that Minister to ensure that the proposed Federation of Nigeria Freight Forwarders’ Association by the CRFFN which is waiting for legislation come to reality and “will be the single mouthpiece or voice of the freight forwarders in Nigeria, this is, in addition, to prepare to take its appropriate place and status with the FIATA thereby replacing the CRFFN registration with the FIATA which was done on a temporary basis.

“The Federation is all inclusive, but the last Governing Council dominated by the stooges of the industry political parties ignored this goal, just to ensure that other associations don’t smell accreditation of the CRFFN. You may wish to set up an independent Committee to review the activities of the accredited associations giving the parameter of Professional performance indicators.”