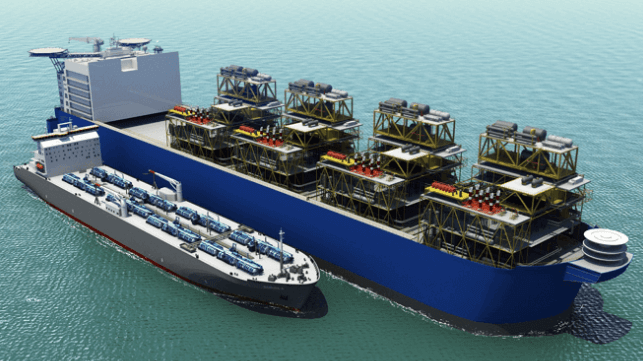 The Palo Alto-based energy think tank EPRI has released a novel proposal to manufacture green fuels using electricity from a small nuclear power plant – at sea. EPRI’s researchers suggest that the shipbuilding industry’s know-how could be combined with next-generation reactor technology to build floating fuel stations at a fraction of the cost of shoreside plants.

The idea has deep roots: the use of nuclear power on ships stretches back decades, and nuclear powerplants were installed on vessels before they were installed on shore. Nuclear propulsion has been in continuous (military) use for 70 years. It has mordern civilian applications as well, primarily in Russia. Rosatom recently built and deployed a floating 70 MWe nuclear powerplant for the port of Pekev, which supplies the town with both electricity and hot water.

ESRI’s proposal would marry nuclear power with the existing chemical processes for making green fuel out of electricity. Beyond integration and design work, the researchers expect that there would be little additional R&D needed for process maturation.

The plan is targeted squarely at hard-to-decarbonize transport sectors, including shipping. Most of the plans for decarbonizing the maritime industry center on hydrogen-based fuels, primarily methanol and ammonia. The “green” versions of these fuels are based on green hydrogen, and green hydrogen requires lots of electricity to make.

Most proposals for manufacturing green hydrogen are based on the use of wind or solar power, raising questions about scalability and competing power requirements. Nuclear powerplants offer high scalability, low cost, a small footprint and long run life – but they are burdened by public perceptions of risk.  By building a  powerplant on a permanently-moored offshore installation, then using its electrical power to produce non-nuclear fuels, the cost and scale advantages of nuclear could be harnessed without the site-selection and permitting challenges of shoreside construction.

EPRI proposes to use next-generation advanced fission reactors, which are more compact and operate at much lower pressures than the familiar pressurized-water reactors of yesteryear. The technology’s footprint is small enough to fit on an FPSO-sized vessel, suitable for low-cost series production by advanced shipbuilders – for example, South Korea’s Big Three, which churn out FPSOs and other complex vessels with regularity.

Modular, series construction in an industrial shipyard would drop capital costs dramatically when compared with building a plant at a shoreside construction site, according to EPRI. A 1.2 GWe “FPSO” could achieve average costs of $1,600/kWe of power – a fraction of the typical $5-6,000/kWe price for a shoreside plant. When including O&M, the long term levelized cost of fuel comes to $230 per tonne of green ammonia – below even the most optimistic forecasts for solar- and wind-powered green fuel production.