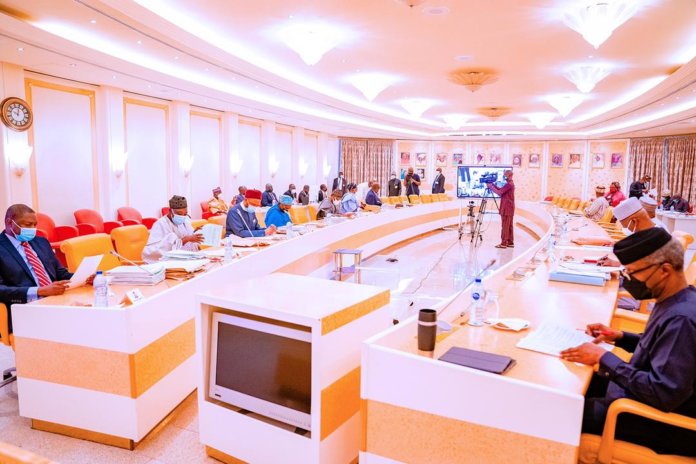 The council approved the acquisition of 20 per cent minority stake by the Nigerian National Petroleum Corporation (NNPC) in Dangote Petroleum and petrochemical refinery in the sum of $2.76 billion. This was as hoped for the restoration of the country’s four refineries in less than eight years from now was raised yesterday.

Minister of State for Petroleum Resources, Chief Timipre Sylva, disclosed these at the end of the monthly FEC meeting in Abuja. Sylva also announced the federal government’s approval of $1.484 billion for the rehabilitation of both Warri and Kaduna refineries.

However, the Nigerian National Petroleum Corporation (NNPC) failed to meet its gross revenue projections in the first six months of 2021, hitting a huge deficit of N1.106 trillion during the period.

Speaking to newsmen at the end of the weekly FEC meeting presided over by Vice President Yemi Osinbajo at the State House, Abuja, Minister of Information and Culture Lai Mohammed said the meeting approved the memo for the ratification of the president’s approval for the award of the contract for the Lagos-Calabar coastal standard-gauge railway.

The information minister said, “This is a very old project, which we inherited. Under the former administration, approval was given, but nothing was done, but today, the council has given the approval to commence the Lagos-Calabar coastal route.”

According to him, the rail project is important to the nation’s coastal economy, which is why $11.174 billion is earmarked for it with a completion period of six years.

His words: “This particular route is very important because after the Lagos-Kano route, this Lagos-Calabar coastal route, actually will link all the coastal cities in the country.

“The proposed route alignment is to go from Lagos to Shagamu, Shagamu to Ijebu-Ode, Ijebu-Ode to Ore, Ore to Benin City, Benin to Sapele, Sapele to Warri, Warri to Yenagoa, Yenagoa to Port Harcourt, Port Harcourt to Aba, Aba to Uyo, Uyo to Calabar, Calabar to Akamkpa to Ikom, to Obudu Ranch, with a branch line from Benin City to Asaba, Onitsha Bridge and then Port Harcourt to Onne Deep Seaport.”

The minister also stressed that the commitment of the present administration to expanding and consolidating on the rail projects across the country informed FEC’s approval of the funds for work to commence immediately on the Kano-Jibia rail and the Port Harcourt-Maiduguri route.

Speaking also, Minister of Power, Sale Mamman, disclosed that FEC approved two projects for his ministry, including the construction of 2 by 60 MVA 132 33 substations at Gagarawa, Jigawa State, in favour of Messrs Power Control and Appliances Limited in the sum of N154,212,396.05.

“The second one is the award of the contract for the engineering, procurement and construction of 2 by 30 MVA 132 33 substations at Ibiono Ibom, Akwa Ibom State in favour of Messrs YEMEC West Africa Limited in the sum of US$6.2 offshore plus N1.8 billion onshore,” he said.