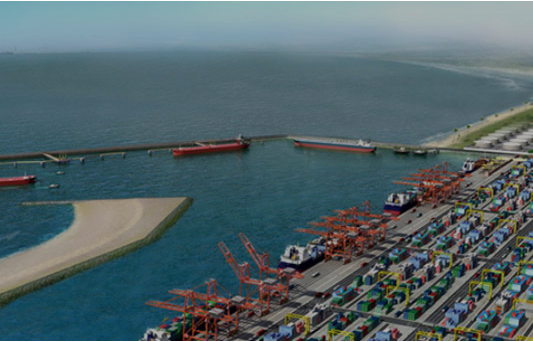 170,000 direct and indirect jobs will be created for Lagos residents upon completion.

According to the federal government, the Lekki Deep Seaport will be West Africa’s deepest port and will be a major game-changer in Nigeria’s maritime economy, with benefits to the West and Central sub-regions of Africa.

This was revealed by the Permanent Secretary of the ministry, Dr Magdalene Ajani, according to a tweet by Anastasia Ogbonna, Assistant Director Press and Public Relations of the Federal Ministry of Transportation, Abuja, when she led a Ministerial Team on a quarterly inspection of the progress of construction on the Lekki Deep Sea Port in Lagos.

An audio-visual briefing by the management of Lekki Port Enterprises, the contractors (China Harbour Engineering Co. Ltd), and the Project Managers (Louis Berger Intl.) was held during the review, as well as a physical inspection of the works on location.

According to Ajani, the developers are working hard to reach the Minister of Transportation, Rotimi Amaechi’s, deadline of the fourth quarter of 2022 for the start of commercial operations.

Awal Suleiman, Director of Maritime Services, Pius Oteh, Director of Legal Services, and Hassan Bello, Executive Secretary, Nigerian Shippers’ Council, are also on the inspection board. Others include the Nigerian Ports Authority’s Managing Director, Hadiza Bala Usman, the Nigerian Maritime Administration and Safety Agency’s Director-General, Bashir Jamoh, and other professional officers from the ministry and agencies.

The Tolaram Group, a Singaporean enterprise, is investing $2 billion in the Lagos Free Trade Zone to construct the Lekki Deep Seaport, which is being built by China Habour Engineering.

Phase 1 of the seaport project, which is funded by a $629 million loan from the China Development Bank (CDB), is almost 50% complete.

The deep seaport’s scale would enable vessels with a capacity of 18,000 TEU, four times larger than those berthing at Apapa seaports, lowering the cost of container shipping from anywhere in the world.
The deep seaport is estimated to create more than 170,000 direct and indirect work opportunities for Lagos citizens once it is finished, and it will help the Federal Government decongest the Lagos ports of Apapa and Tin Can.