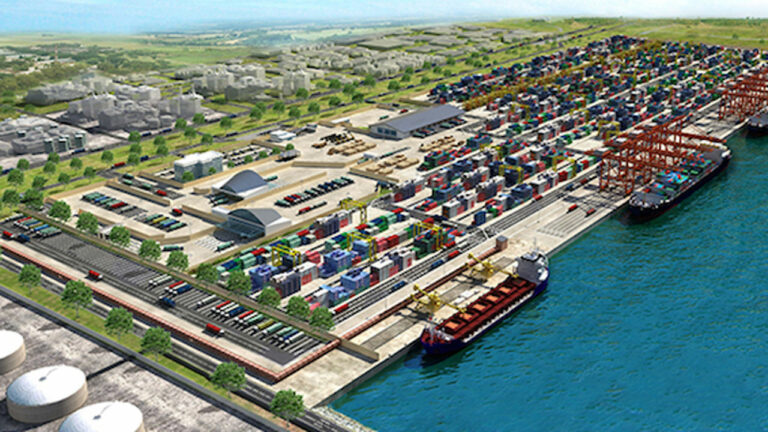 The Minister of Transportation, Rotimi Amaechi, on Tuesday, said the Federal government will begin construction of Bonny Deep seaports after completion of the Lekki Deep Seaport.

He disclosed this yesterday during President Muhammadu Buhari’s inspection visit of the Lekki Deep Seaport project in Lagos.

Amaechi, further disclosed that the reason the president came for the inspection was to publicize the project to Nigerians that, the government is building the first deep seaport in Nigeria.

“I am convinced that we would commence work in Bonny deep seaport before we leave Office.

” Also, Ibaka Deep Seaport has gotten government’s approval and we are fast-tracking the approval of Badagry Deep Seaport, so they can also get their own approval.

“By the time we leave office, all those people who would have been granted approval are all private seaports. The only one that government will participate in its ownership is the Bonny seaport.

He, however, said that the deep seaports are almost ready as the cargo handling equipment will be ready in June while commercial operations will begin in September.

He said, “The reason for asking the President to come to Lekki Port, is to publicise the seaport so that people will know this Government is building the first deep seaport in Nigeria. The other ports in Nigeria are all river ports.

“The next reason for the president coming, is also to put the heat on them (promoters), you know that the port is almost ready, if not for the equipment, they can actually get this place ready before June, but they said the equipment is arriving by June 2022 and installation will take them till September and then it can be commissioned in September.”

“You see the miracle of bringing the President here, that is why it is important for a President to inspect projects, that will hasten the process of completion if there is money,” he said.

Speaking earlier, Managing Director, Nigerian Ports Authority (NPA), Mohammed Bello-Koko, said the Lekki Deep Seaport, which has been under construction for years, would be ready for a test run in September, after which the first commercial vessel can be received at the port.

According to him, the port is located on about 90 hectares of land, is supposed to have three container terminals and will be the first automated port in Nigeria that will enable the speedy clearing of goods.

Bello-Koko, who noted that the commencement of Lekki Port will reduce the rate of traffic at Apapa and Tin-Can Island Ports, said there will be Ship-to-Shore (STS) cranes that will enable faster processing of goods.

“Some of the businesses we have lost to other neighbouring West African countries due to draught limitation will be regained.

“There will be employment creation and increased revenue for the government. It will create competition and compel other terminal operators to up their games to reduce cargo dwell time at their terminals.

“Apapa and Tin-Can Island Ports have been operating far beyond their capacity which means that the excess cargoes that have been going there would be diverted to Lekki Port,” he explained.

On the connectivity of the port to the rail line, Bello-Koko said there is already a plan and the Minister of Transportation has given the Nigerian Railway Corporation a directive to carry out a survey on the possibility of linking the port to the Lagos-Ibadan railway.