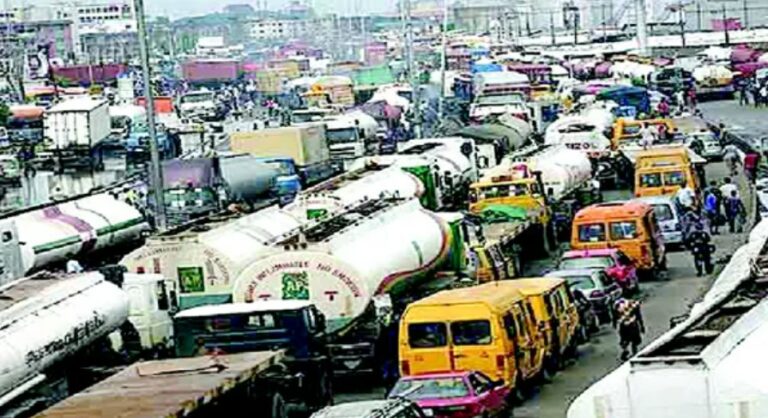 Despite the presence of security personnel and men of the Lagos State Special Traffic Management and Enforcement Compliance Team, traffic gridlock has resurfaced around the Mile-2-Otto Wolff axis along Oshodi-Apapa Expressway, due to activities of truckers subjecting motorists to untold hardship.

The chaotic traffic situation around the axis, which had relatively subsided recently, has returned on a daily basis, with miscreants and union members extorting truck drivers thereby causing avoidable gridlock.

The toll collection was in defiance of the earlier suspension placed by the state government on further sales of tickets to truckers on all access ports road with immediate effect.

A truck driver, who simply identified himself as Adamu, told Vanguard that the unions were collecting N50,000 from truckers before they could access the port area.

Also, tanker drivers flouted the order against indiscriminate parking on roads as they lined up on the Mile-2-Otto Wolff axis, causing congestion.

Other motorists were held in traffic for hours between Mile-2 and Otto Wolff, which takes less than two minutes to drive through.

The gridlock, which resurfaced about two weeks ago, worsened, yesterday, as trucks and tankers blocked the road from Fatgbems filling station to the Otto Wolff axis, which led to gridlock.

Men of the Lagos State Traffic Management Authority, LASTMA, the police, Federal Road Safety Corps, FRSC, among other security personnel watched helplessly as the truckers had a field day.

Blame it on road rehab — Lagos govt
When Vanguard contacted the chairman of the Lagos special team and Special Assistant to Governor Babajide Sanwo-Olu on Transportation, Mr Oluwatoyin Fayinka, he confirmed the ban on the sale of tickets by the unions.

Fayinka, however, attributed the gridlock to the ongoing rehabilitation of the Apapa Expressway as well as fuel scarcity.

He said: “There is road diversion at Mile-2, motorists are making use of Signal Barracks turning to connect Otto Wolff and continue their journey to Oshodi. Traffic is on the high side as a result of this.

“Massive construction work on going by the Hitech Construction Company, diversion everywhere by the service lane, high influx of tankers from all over the country to load fuel in Apapa, because of the fuel scarcity, are what we are dealing with presently in the axis.

“We urge the motorists and road users to bear with us as we are doing everything to address the situation.”

Also reacting to the gridlock, General Manager, MOB Integrated Services, a truck park operator, Mr Tokunbo Ezekwe, explained that the weeklong protest embarked upon by the freight forwarders to oppose the Vehicle Identification Number, VIN, policy by the Nigeria Customs Service, NCS, has worsened the gridlock.

Ezekwe said: “Less than one week into the protest, more than 12,000 vehicles were trapped at the Port and Terminal Multi-Purpose Limited, PTML, just as firms operating around have recorded a drop in their revenue.”He said the number of trucks that goes into the port from his park has reduced drastically, adding that the revenue profile of his firm has also dwindled as a result of the protest.

“The impasse has also led to an increase in the traffic situation in and around Apapa area of Lagos,” Ezekwe said.