Japanese Govt. earmarks $260,000 to combat piracy, kidnapping in Nigeria, others 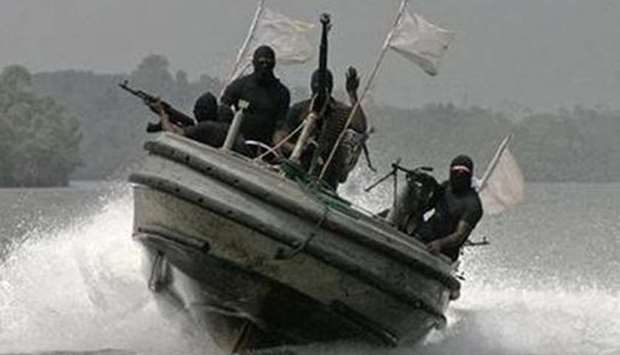 The Japanese government has earmarked 260,000 dollars in its bid towards combating piracy and kidnapping in the Gulf of Guinea (GoG), especially the Nigerian waterway.

The UN Development Programme (UNDP) Team Lead on Governance, Peace and Security, Matthew Alao, said this on Monday at the inauguration ceremony of a two-week anti-piracy first course organised by the Martin Luther Agwai International Leadership and Peacekeeping Centre (MLAILPKC) in Jaji, Kaduna.

The News Agency of Nigeria (NAN) reports that the anti-piracy course was also a collaboration with UNDP and the Japanese Government.

“The imperative of this project cannot be overemphasised as about 90 per cent of the yearly kidnapping incidents worldwide occur in GoG and the pirate operations in the region are becoming more sophisticated.

“These pirate activities pose serious threats to trades and businesses along the corridor and retard the economies of the GoG countries particularly Nigeria.

“This glooming outlook calls for concerted actions by the multi-lateral and development partners and the GoG countries to reduce the influence and activities of piracy for improved security, peace and sustainable development in the area.

“The published report on the root causes of piracy in GoG will contribute to evidence-based programmatic and policy interventions by the GoG countries and the development partners aimed at curtailing maritime crimes in the region,” he said.

According to him, the publication already informed the development of the counter-piracy course curriculum which is being used to run the course.

“This is equally helping to strengthen the capabilities of MLAILPKC and expand its mandate to conduct courses on anti-piracy thereby assisting to reduce the influence of piracy in GoG.

“The Government of Japan and other like-minded partners are encouraged to invest more in projects that will curtail the activities of these pirates to promote security, peace, economic advancement and stability in the region.

“These should include targeted investments that will positively impact on the livelihoods and income-generating activities of the inhabitants of the GoG coastal communities,” Mr Alao said.

He thanked the Government of Japan for investing into the project and for the sustained strong partnership with UNDP Nigeria.

He also commended the commandant of the Centre, and his predecessor, James Ataguba for providing the right leadership and direction required for the effective and timely implementation of the project.

Also, speaking, the Ambassador of Japan to Nigeria, Matsunaga Kazuyoshi, said countries such as the United Kingdom and the United States are working together with the Nigerian government on security in the Gulf of Guinea.

Mr Kazuyoshi, who spoke via recorded video, noted that the Japanese Government was committed to contributing to the security of West Africa and protecting people’s lives through a variety of measures including capacity building for personnel in charge of maritime safety.

“This project is one of Japan’s contributions towards capacity building. We hope that the training would improve the safety of the Gulf of Guinea through the knowledge the 30 participants will acquire.

”The project also falls under the category of “Support for stabilisation of regions facing conflicts” which is one of the three main areas of Japan’s “New Approach to Peace and Stability in Africa”, the so-called “NAPSA” initiatives announced in 2019.

“This is also a project on the Free and Open Indo-Pacific, (FOIP), an initiative of the Japanese Government to build a rules-based international order, free trade, freedom of navigation, and the rule of law, all of which are essential principles for achieving regional stability and prosperity.

“The total trade volume between Nigeria, the economic powerhouse in Africa, and Japan is one billion USD per year. In light of this, ensuring maritime safety in the Gulf of Guinea is a key trade hub in West Africa needed to promote bilateral trade,” he said.

He said research on piracy in the Gulf of Guinea, which was released in August as part of a component of the project, has revealed that the root cause of piracy is economic and employment difficulties.

“Japan and Nigeria are far apart, but we are connected by sea, therefore as a true friend of Nigeria, it can be said that Nigeria’s matter is Japan’s matter,” MrKazuyoshi said.

He reassured everyone that the Government of Japan, in cooperation with other countries would continue to contribute to the peace and stability GoG for the livelihood of Nigerians and for regional economic stability.

Earlier, the Commandant of MLAILPKC, Auwal Fagge, said the Centre was saddled with the responsibilities of delivering realistic training to potential peacekeepers and leaders for the multi-dimensional challenges of contemporary peace support operations and security challenges.

He noted that training was essential to performance and the overall successes in the field and other areas of endeavours in general.

“Piracy, in particular, has become increasingly sophisticated especially with the influx of Small Arms and Light Weapons (SALW) in the hands of pirates, non-state actors and other criminals on the waterways and high seas,” he said.

He also noted that the research and curriculum for the anti-piracy Course I of 2021 is successfully completed and developed respectively.

“The aim of the course is to train members of the Amed Forces, staff of national maritime organisations and relevant agencies as well as relevant stakeholders from the GoG States on anti-piracy strategies.

“The course is a two-week programme of intensive presentations and practical exercises designed to provide security personnel and other relevant stakeholders with an understanding of intricacies of piracy especially in the Gulf of Guinea,” Mr Fagge said.

He lauded the Government of Japan for its support to the centre and the UNDP for facilitating the project.

He urged the participants to participate actively and contribute positively during the course.