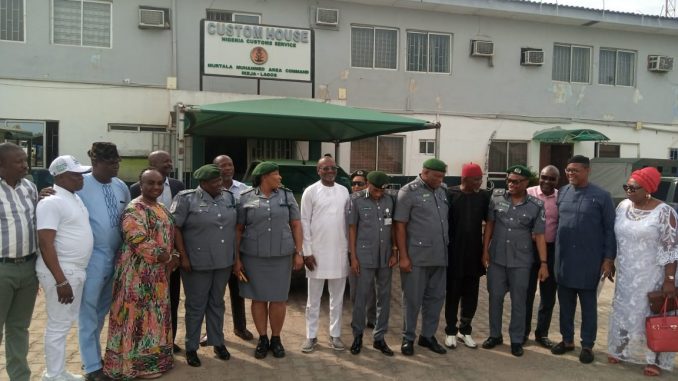 NAGAFF President, Chief Tochukwu Ezisi made the call he led other national executives and the newly elected Airport Chapter leaders on a familiarization visit to Customs and Police commands at the airport, yesterday.

At Airport Police Command,  Chief Ezisi told the Commissioner, CP Salem Vincent Amachree  that the visit was primarily to introduce the new Airport Chapter executives of NAGAFF and to further deepen the relationship between the association and the Command.

“I asked the Airport Chapter Chairman, Mr. Udo Bernard Onyeka if the chapter or freight agents in general have any issue with the Police that he would like us to discuss here, but he said that there have been no problems. This goes to show the quality of your leadership. I commend you for this, even as I beckon on you to support and collaborate with the new NAGAFF executives at the Airport Chapter.

“Sometime ago, the present Inspector General of Police visited the NAGAFF headquarters in Lagos and we had a robust engagement. We also prayed for him to the reach the zenith and today he is the Police IG. We also pray that you would record similar fate in the Police Force,” the NAGAFF President said.

Speaking, CP Salem Vincent Amachree described NAGAFF as a strategic partner in trade facilitation and also in ensuring safe operations at the airports.

Noting that NAGAFF and the Police have enjoyed a strong partnership over the years, the Police boss told NAGAFF President that his administration should maintain the  synergy and strive to build upon.

“I have noted your request to deal with the established executives at the Airport Chapter and I would grant this request. I’m someone who always favours a united house and I’m excited that NAGAFF has been able to grow in unity despite the diversity and varying backgrounds of the members.

“I’m also happy that we are having this opportunity to meet physically because it avails me the privilege of connecting the voices of some eminent NAGAFF leaders that I have only had conversations with via the phone. During electioneering, I know that people could say things to score points and the group could be heated with different parties having their supporters, but it is expected that after the elections everyone comes together as one family and the loser accepts defeat as a good sportsman. This way, the association continues to grow in strength and unity of purpose, ” said the Police boss.

He said the Police has the responsibility to ensure safe air-travel business and other airport activities, saying the doors of his office are always open to NAGAFF leaders.

Welcoming the NAGAFF President to the Customs Command of Murtala Mohammed International Airport Cargo,  the Area Controller, Comptroller Sambo Dangaladima assured that Customs would continue to partner with NAGAFF at the airport.

“I know NAGAFF to be a transparent body and the good thing is that we work as a family by solving issues within instead of escalating them. Customs and freight agents are like brothers and sisters. I am also glad about the way NAGAFF executives conduct their affairs at the airport. They carry out their businesses in a professional manner. They help us solve problems and proffer advice on several issues,” Comptroller Dangaladima said.