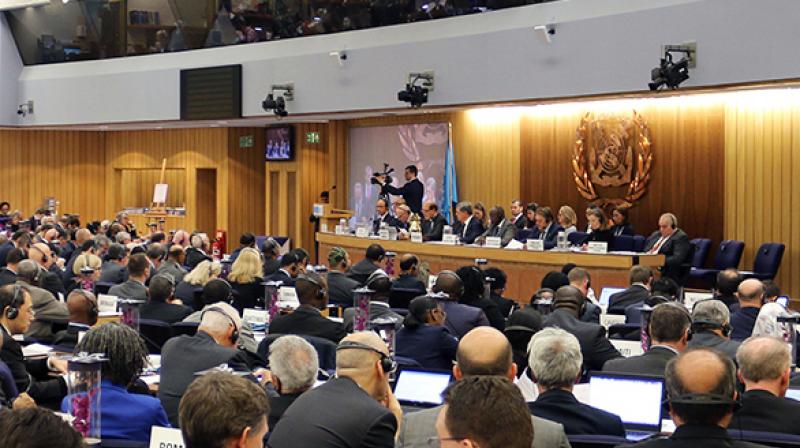 Nigeria and 47 other countries have indicated interest to contest in the election into the International Maritime Organization (IMO) Council for the 2022-2023 biennium.

The IMO Council election will be held during the IMO Assembly’s 32nd session held December 6-15, 2021.

The IMO Council consists of 40 Member States, elected by the Assembly for two-year terms. The Council is responsible for supervising the work of the organization. Between sessions of the IMO Assembly, the Council performs all the functions of the Assembly, except that of making recommendations to governments on maritime safety and pollution prevention.

The IMO Council is categorised into A, B and C countries. Category A comprises 10 countries with the largest interest in providing international shipping service, while Category B also has 10 countries with the largest interest in international seaborne trade. Category C consists of 20 countries not elected under, which have special interests in maritime transport or navigation and whose election to the Council will ensure the representation of all major geographic areas of the world.

All the 10 countries in Category A are seeking re-election. They are China, Greece, Italy, Japan, Norway, Panama, the Republic of Korea, the Russian Federation, the United Kingdom and the United States.

Also, all the 10 countries in Category B are seeking re-election. They are Argentina, Australia, Brazil, Canada, France, Germany, India, the Netherlands, Spain and the United Arab Emirates. Sweden, which is not currently a member of the Council, is the 11th country seeking election under Category B.

In Category C, all the 20 countries currently serving in the IMO Council are seeking re-election. They are Bahamas, Belgium, Chile, Cyprus, Denmark, Egypt, Indonesia, Jamaica, Kenya, Kuwait, Malaysia, Malta, Mexico, Morocco, Peru, the Philippines, Singapore, South Africa, Thailand and Turkey. The seven countries that are presently not in the Council but are seeking election into it in December are Bangladesh, Saudi Arabia, Nigeria, Pakistan, Poland, Qatar and Vanuatu.

It is believed that the chances of Nigeria in the election are bright since it has made giant strides in curtailing piracy within its shores and since it is the only West African country seeking election into the Council.

To ensure it garners a sufficient number of votes at the December election, Nigeria has already commenced a diplomatic shuttle involving officials of the Ministry of Foreign Affairs, Federal Ministry of Transportation and the Nigerian Maritime Administration and Safety Agency (NIMASA).

Recently, the Director-General of NIMASA, Dr. Bashir Jamoh, while speaking at the third seminar of the Atlantic Centre in Lisbon Portugal, urged IMO Member States that consider themselves as “friends to Nigeria” to support the country’s bid for election into the IMO Council.

“We ask for your vote and count on your continued confidence in the efforts of Nigeria to work in partnership with other nation-states in the Gulf of Guinea, to continue keeping our corridor of the Atlantic Ocean a safe passage for seafarers, their vessels and the vital supplies they transport for our common sustenance,” Jamoh had said.