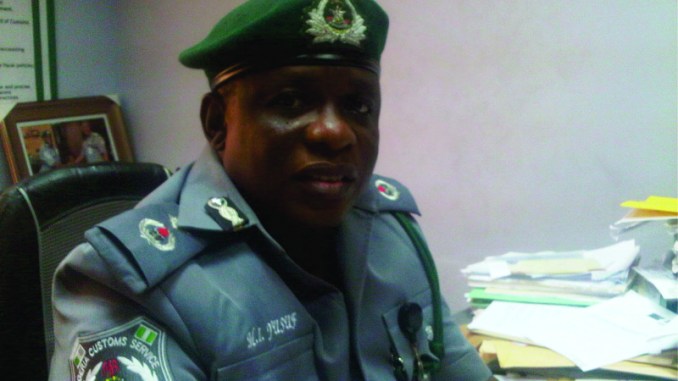 The new Customs Area Controller of Apapa Command of Nigeria Customs Service, Comptroller M.I. Yusuf has warned that his administration would not hesitate to deal with freight forwarders who would not comply with the extant laws of the government on import and export trades.

The new controller stated this in an interview with PortNews after he took over the leadership of the command from his predecessor Assistant Comptroller-General Mohammed Abba Kura in Apapa yesterday.

Yusuf who said scanners would be deployed by the second quarter of the year noted that he would continue with the good work of his predecessor. He said that loopholes would be blocked to boost the revenue profile of the command.

“I cannot be a friend to non-compliant importers and freight forwarders. All stakeholders should comply and follow the regulations. Non-compliant one should understand that compliance is better than non-compliance; compliance brings about speed release of cargo,” said Yusuf, who promised to boost trade facilitation.

Earlier in his valedictory speech, ACG Mohammed Abba Kura welcomed the new customs area controller and said that when he assumed office, his mission was to consolidate on the legacies of my predecessors and further improve in the creation of an enabling environment where officers and stakeholders could work harmoniously for the betterment of the nation.

Kura who listed his achievements said that he could achieve all these with the support of all stakeholders and officers of the command and appealed to stakeholders to continue to support the new controller who, he said, is not new to the command.

“I am confident that, just as we consolidate on the legacies of my predecessors, the new CAC will do the same and even surpass the legacies by the will of God,” said Kura.