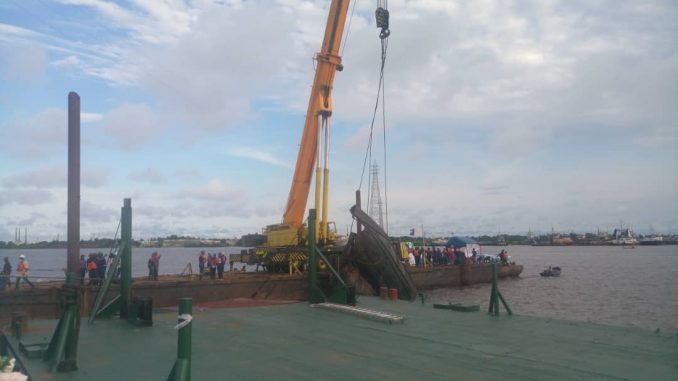 Humber Marine Werks removing shipwreck during the shipwrecks removal flag off by NIMASA in Lagos.

Nigerian Maritime Administration and Safety Agency (NIMASA) has finally demystified the myth behind the removal of shipwrecks as its contractor, Humber Marine Werks, an indigenous shipwreck removal expert, on Friday, September 24, 2021, lowered its crane into the water of Badagry Channel in Lagos and removed the first wreck.

Speaking while the Minister of Transportation, Rotimi Amaechi, flagged off the shipwrecks removal project, the NIMASA Director-General Dr. Bashir Jamoh said the shipwrecks had caused a lot of damages to vessels as he maintained that the removal long overdue was a milestone and would make the creeks safe and navigable for vessels.

“Shipwrecks have littered our water channels for so long causing encumbrances to safety and easy navigation of vessels. Our channels must be free of such wrecks that can damage vessels. This exercise is a milestone towards developing our shipping industry,” said Jamoh.

Jamoh said the wrecks removed would create a lot of wealth and job opportunities for the nation and teeming young Nigerians as many local and international stakeholders including Bayelsa State, Nigerian Railways had indicated interests to set up foundries where such wrecks would be processed.

Thanking the federal government for providing funds for the removal, the NIMASA boss charged members of the shipping community to stop buying disused vessels thus stopping the Western nations from turning the Nigerian sea into a dumping ground.

He, however, assured the shipping community that NIMASA would not relent in the discharge of its statutory functions and regulatory responsibilities.

Speaking at the event, the Acting Managing Director of Nigerian Ports Authority (NPA) Mohammed Bello Koko said shipwrecks have constituted impediments to free movement of vessels and charged NIMASA to start the removal with critical wrecks.

Humber Marine Werks removed the first wreck to the admiration of the minister and other stakeholders who included the former minister of interior, Captain Emmanuel Iheanacho, former director-general of NIMASA, Dr. Adegboyega Dosumu, and Chairman of Seaport Terminal Operation Association of Nigeria Princess Vicky Haastrup, who is the Executive Vice Chairman of ENL Consortium, a terminal operator.