No holding bays for empties, no renewal of 2021 licences, NPA tells shipping lines 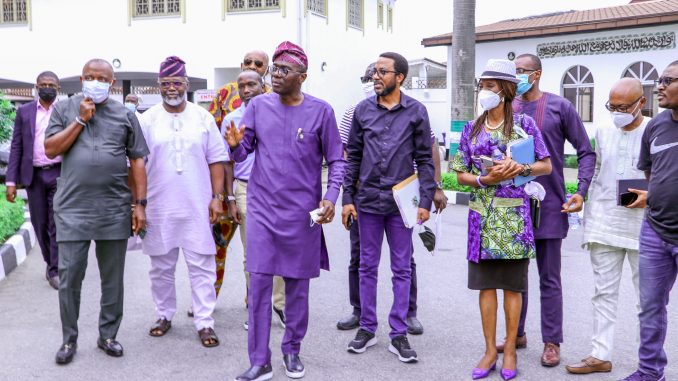 The Acting Managing Director of the Nigerian Ports Authority (NPA), Mr. Muhammed Bello-Koko has declared that the provision of holding bays for empty containers is one of the requirements for shipping lines operating in Nigeria to get their licences renewed for 2021.

Bello-Koko noted that NPA has adopted various efforts to address the myriad of hiccups associated with the return of empty containers to the port, explaining that the empty container policy of NPA requires all shipping companies to bring boxes into the country to establish holding bays for their containers. He said that NPA is working with the Nigerian Export Promotion Council to significantly improve the transfer and processing of exports at the port.

Bello-Koko stated this on Saturday during a stakeholders’ meeting on Apapa traffic gridlock with Lagos State Governor Babajide Sanwo-Olu at Lagos House in Marina, Lagos.

According to Bello-Koko, “shipping lines are to have holding bays capable of handling 50 – 65 percent of their monthly throughput. These companies are aware of the consequences of non-compliance. There is an ongoing assessment of parameters required for the release of 2021 licences and the report is due any moment. That (report) would determine the qualification of a shipping line operate in the country.

“The Authority is collaborating with the Nigerian Export Promotion Council (NEPC) to establish a seamless integration of the export processing terminals into the “Eto” platform. This in addition to the Lilypond Export Terminal expected to take off soon, will serve as dedicated export loading points. The move would reduce travel time along the port corridor, safeguard the quality of the country’s exports and impact positively on government’s revenue from non-oil exports.”

Bello-Koko told Governor Sanwo-Olu that the NPA has been inundated with complaints of extortions from truckers, especially by security operatives, including the Military, the Police and NPA Security, demanding money from drivers before accessing the Ports. He described the ugly practice as a major disincentive to the smooth implementation of the truck call-up system.

He lamented that it has been alleged that no less than thirty “toll-points” have sprung up around the Apapa and Tin Can Port, where bribes are being collected before trucks are allowed into the Port. He however called for stiffer measures to curb corrupt practices and alleged extortion of truck drivers by traffic and security operatives along the Lagos Ports corridor.

Bello-Koko said “one of the complaints of the truckers has to do with extortion by security operatives, the Army, the Police, the Nigerian Navy and even NPA Security staff. This is one of the areas we require the intervention of the government, in this case, the Lagos State Government because we have Police Officers deployed from the State Command who are allegedly involved in this.

“We at the NPA have resolved to take the right punitive measures against any of our staff involved in this, we have moved some of them out of Port locations, and we will do further reviews, whoever is found involved, would be appropriately sanctioned.

“Because of the involvement of several security units, many checkpoints have been created, we believe there are over thirty checkpoints within the Apapa and Tin Can Port axis, and we believe that this is a major issue causing delays and a whole lot of problems, this was one of the concerns we raised at our meeting with His Excellency,” he said.

The NPA boss acknowledged that the Lagos State Government has been a close partner, especially when it comes to enforcement, both in terms of providing security operatives and monitoring of the “Eto” call-up system, he however said there is a need to further strengthen that collaboration.

He explained that last week after an assessment visit, he directed the “Eto” Project Consultant and operator of the Lilipond Truck Transit Park to redouble their efforts, especially on the deployment of necessary physical and IT infrastructure as well as adequate human resources, to address the gaps and complaints of a delay from Port users.

He disclosed that the NPA has given the TTP company “marching orders” to immediately see to the deployment of this infrastructure, so as to reduce the waiting time of trucks in and out of the Port.

Bello-Koko further said that the meeting discussed the matter of poor access roads, especially around Sunrise Bus-stop leading to the Tin Can Port. “The situation now is that trucks going to Tin Can are now following the Apapa Port road, so no matter how much you control the traffic in Apapa, it would be seen as if you are doing nothing. NPA has reached out to the Federal Ministry of Works, we have been speaking with the Director of Works in the State, and we have asked that they should provide some palliatives around Sunrise  Bus-stop. We were made to understand that the contract for that section of the road has just been awarded, but because of the rains, work has been delayed. There is need for that part of the road to be graded so that the Tin-Can Port corridor would begin to enjoy some measure of free flow of traffic,” he said.

According to the NPA boss, “we have stakeholders like Dangote and others who have factories within the Port and each of them may need to bring in about 300 trucks daily, but it has to be done in such a way that their operations do not affect the need of other Port users to send in their trucks or exporters to send in and bring their trucks out freely. Mr. Governor has given his commitments to further engage the Commissioner of Police in Lagos, he has also directed the CEO of LASTMA and his Special Assistants, who all have given their commitments, that further action would be taken to keep the Port roads free of congestion. It will be a 24-hour operation, we rely on the Lagos State Government on enforcement as it affects traffic along the Port access roads, His Excellency has given us his commitment to that effect and for immediate actions to be taken.”

Bello said he is optimistic that the renewed collaboration with the Lagos State Government would bring an end to the perennial gridlock within and around the Apapa metropolis.

He restated that henceforth, trucks that have not been registered or do not have the “Eto” ticket would not have access to the Port.  “We want residents of Apapa to be able to commute daily without stress, we need to also ensure that containers go into the Port and come out smoothly, we believe that with this meeting, solutions have been found, NPA would play its part and the Government of Lagos would play its part, he said.

“We have directed TTP to deploy necessary infrastructure such as bollards, spikes and automated barriers, while CCTVs be fully installed at the port gates (entry and exit points), especially at the TInCan Island Port where such equipment is practically non-existent at the moment. Similarly,  operators of approved parks and holding bays should immediately take steps to install such equipment in their terminals”, he added.

Speaking at the meeting, the Lagos State Governor, Mr. Babajide Sanwo-Olu assured that the State is going to work closely with the NPA in ensuring that that truck call-up system is successful and the nation’s economy benefits optimally.

Governor Sanwo-Olu called on all port users to be alert to their responsibilities in putting an end to the gridlock in Apapa, saying there was a need for port service providers, security agencies and NPA to adhere to their Standard Operating Procedures (SOP) as well as invest in the needed infrastructure which would galvanise the “Eto” system to heightened performance.

He assured that the State Government would commence engagements with the petroleum tanker drivers, tank farm owners and the NUPENG Union, to ensure that they are factored into the “Eto” call-up system.

According to Sanwo-Olu, the poor state of the Sunrise Bus-stop corridor has been identified as the major cause of the traffic congestion into the Tin Can Island Port, and there is a need for the contractors to speed up work around that area.

On his part, the General Manager of the Lagos State Traffic Management Authority (LASTMA), Mr. Jide Oduyoye, said that Port users should expect a renewed vigor from LASTMA in dealing with the traffic situation around the Lagos Ports.

He said, “there are issues of tankers that are not part of the “Eto” system that needs to be part of the system because once the roads are cleared, we suddenly find out that the petrol tankers occupy the roads which makes it look as if nothing has happened. The ongoing construction around Apapa needs to speed up. There is also the need for other road users to co-operate with the government if there is a process that we all adhere to, no matter the delay, it would be seen as fair and beneficial to everyone.”