“No room for complacency” despite advancement in shipping safety 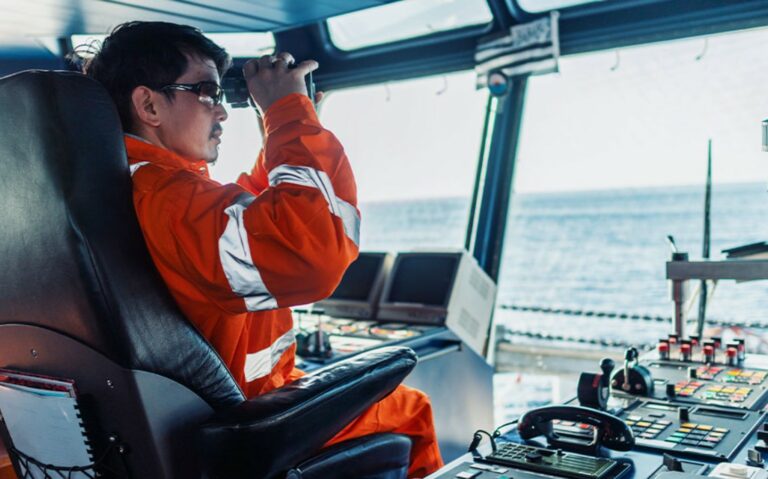 The past decade has seen significant progress in shipping safety as the number of vessel casualties has declined at the same time as the size of the global fleet has grown, according to analysis from Lloyd’s List Intelligence and DNV. But it also highlights how emerging safety risks from new fuels and digital technologies need to be tackled.

The annual tally of casualties has shown an increasingly steep decline over the past four years after reaching a peak for the period of 2,386 in 2017. In addition, the number of detentions decreased 60% by the end of 2020, with most detentions in the general cargo carrier segment. 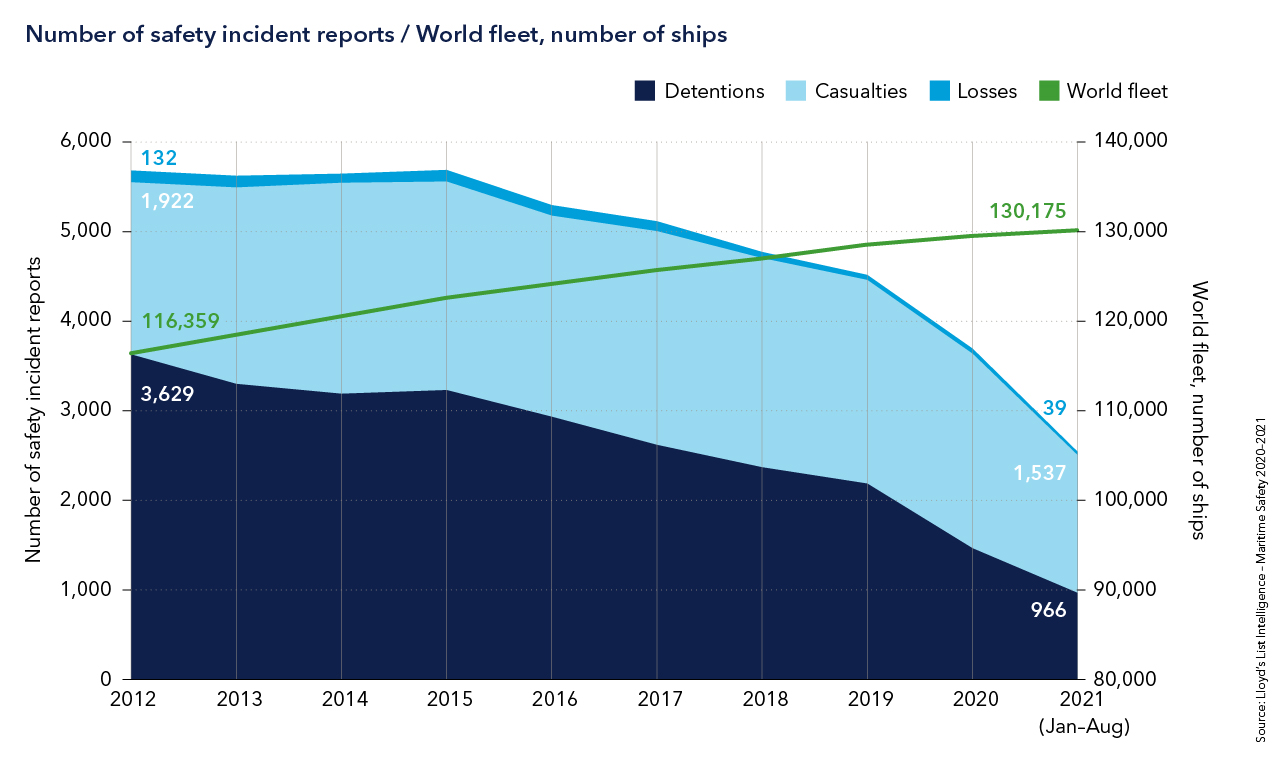 At the same time, the global fleet has increased significantly from 116,000 to 130,175 ships with a total tonnage of 2.3 billion deadweight tonnes as of September 2021 – an increase of 16% in number and 46% in deadweight tonnes. Consequently, the number of safety incidents as a proportion of the fleet has fallen from nearly 5% to only 2% over the course of the decade. 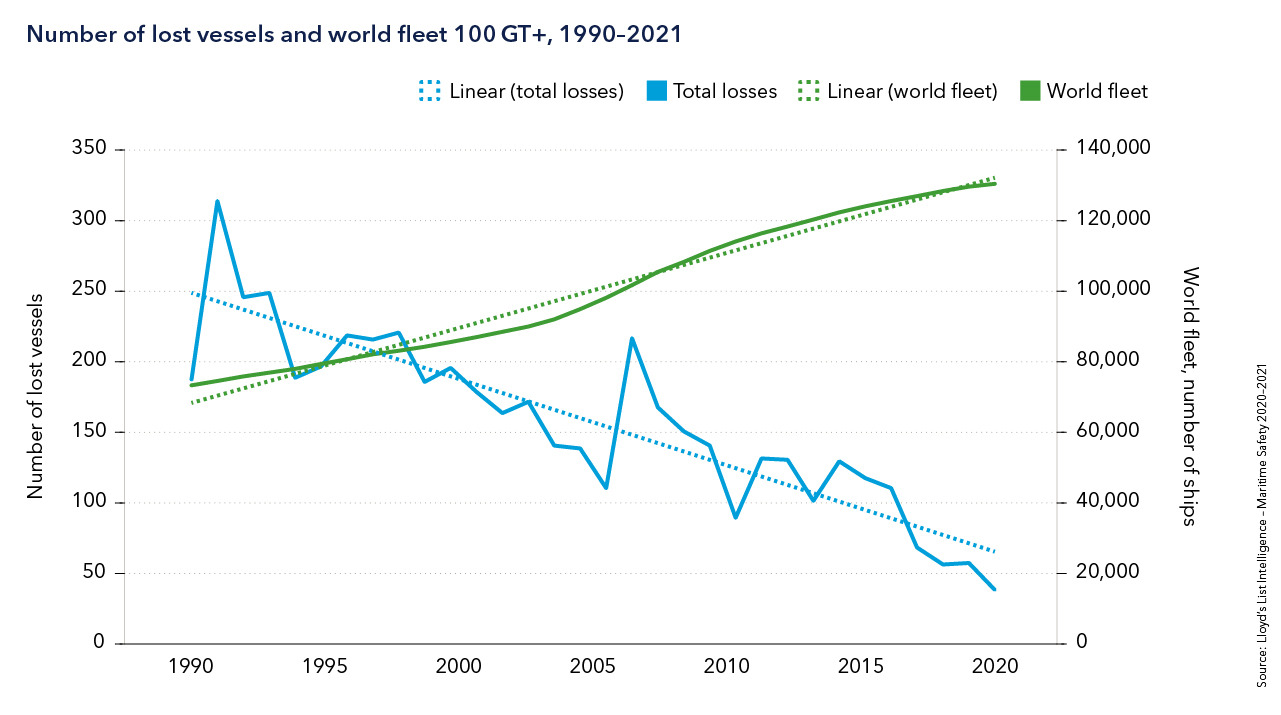 This positive safety trend can be mainly attributed to modern class rules that have resulted in better vessels, increased digitalization and automation of ship systems, and tighter regulatory supervision, according to DNV Maritime Class director for technical support, Marianne Strand Valderhaug.

The report is based on the analysis of 866,000 inspections, 26,000 detentions, 22,000 casualty incidents and 1,000 losses in the Lloyd’s List Intelligence database. “Through interrogation of that data, we have identified a gratifying, overall pattern of improvement in maritime safety, although there can be no room or time for complacency, and critical issues lie ahead for shipping,” Lloyd’s List Intelligence Head of Consulting, Chris Palsson, states in the report. 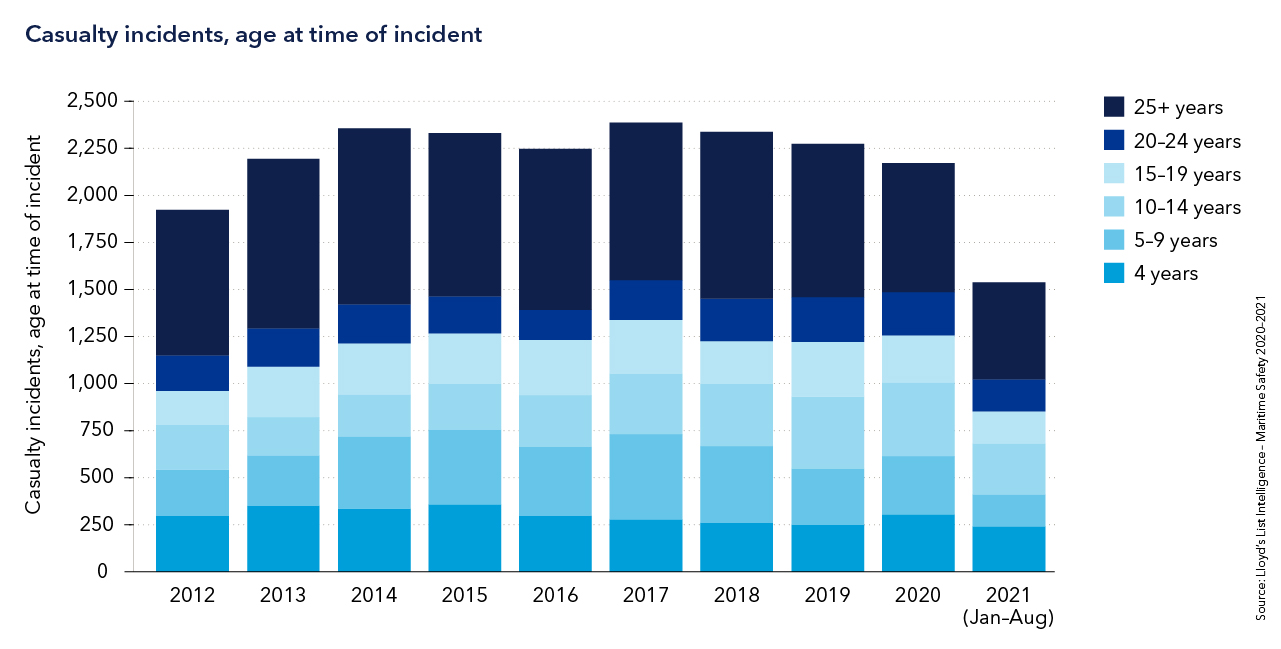 Hull and machinery are major cause of casualties

The statistics also show that around one-third of 21,746 casualties over the period occurred with vessels aged over 25 years, with older general cargo carriers and passenger vessels accounting for the highest number of casualties. These represent large fleets of smaller vessels often engaged in low-margin operations, resulting in older ships with lower capital costs and less fleet renewal.

Nearly half, or 48%, of total casualties were due to hull and machinery (H&M) damage – with machinery issues the main cause of hull damage accounting for only 5% – and there was a surprising increase in such incidents involving vessels between 10 and 14 years of age. This was identified as the most common cause of casualties across all vessel segments as the overall number of collisions declined over the period. The older general cargo fleet had the highest average annual number of casualties at 550 due to H&M damage, while this accounted for 58% of all passenger vessel casualties – the largest share of any vessel type.

Palsson states in the report that “there is not enough detailed data evidence yet to make a definitive determination” as to why machinery damage continues to be the main cause of casualties. But he points out that adoption of new fuels and change of vessel speed, such as slow steaming, to comply with EEXI and CII requirements could increase the risk of machinery failure and damage.

Valderhaug says: “While the overall number of casualties has gone down dramatically, a surprisingly high proportion were caused by H&M issues, though the relative tally varied across ship segments due mainly to vessel type and age, as well as where these ships are trading.”

Reducing the incidence of machinery failures

She believes a lack of port state supervision in certain parts of the world allows older and poorly maintained vessels to continue trading, increasing the risk of casualties and losses. But stricter class requirements for newbuilds and a stronger focus on preventive maintenance, combined with tightening supervision, have raised the safety bar to make it increasingly difficult for substandard vessels to trade, she says.

DNV’s new Operational Reliability class notation is designed to tackle the high number of machinery failures and reduce the risk of blackout by minimizing functional failures in propulsion, steering, electrical power and manoeuvrability. “Improved condition monitoring for preventive maintenance, such as through the use of remote digital sensors, is also necessary to reduce the rate of machinery failures,” Valderhaug says.

Similarly, DNV is applying digital tools to enhance hull survey work with historic data collation for more accurate condition analysis, while new requirements such as those for marine coatings have greatly reduced corrosion and structural breakdown.

Machinery insurance claims represent the highest percentage compared with other claim types and many of these are fuel-related, Helle Hammer, Managing Director of the Nordic Association of Marine Insurers (Cefor), states in the report. “We need to learn about these new fuels and engage with our clients to ensure the risks are fully understood and managed. Just as importantly, we need IMO regulation and class rules on the implementation and use of these new fuels,” she says.

New safety risks are presented by alternative fuel technologies required for decarbonization – for example, ammonia is highly toxic and hydrogen is easily ignitable – and it is therefore necessary to develop new class rules and safety regulations to mitigate these hazards, according to Valderhaug. DNV sees a requirement for renewed risk controls and a new regulatory approach based on individual fuel assessments, as well as greater industry knowledge and experience of these potential safety risks – with class set to play a vital role in this regard.

Rules for alternative fuels pave the way for safe operations

DNV has already issued classification rules for the use of LNG, ammonia, fuel cells, methanol, ethanol and LPG to safeguard against fire and the release of toxic gases. The new “Fuel ready” notation is applicable for ammonia, LNG, LPG and LFL (methanol) as a ship fuel – either individually or for more than one fuel at the same time to stay safe and flexible in the future. The classification society has also taken the lead in joint industry projects to develop safety guidelines for the use of hydrogen and batteries.

A “safety gap” has been identified in an earlier paper from DNV, due to emerging risks from the dual forces of decarbonization and digitalization, such as fire and explosion hazards from alternative fuels and issues like data security and increasing complexity with digital systems.

Digitalization is intended to enhance efficiency, environmental performance and safety through application of innovative technology such as digital twins and remote sensors for monitoring of critical equipment and fuel consumption. But it will also pose new safety challenges due to potential system failure and cyber-security risks that need to be managed, according to Øystein Goksøyr, DNV’s Head of Department Safety Advisory.

“Increasingly complex and integrated systems call for a dedicated system integration role. This is a relatively new role in shipping and, together with standardized rules, it needs to be implemented and strengthened to close the safety gap with uptake of new technology in the industry, as any system failures could halt adoption at scale of vital technologies that can also benefit safety in the long run,” he explains.

Such issues are being addressed with DNV’s new Data Infrastructure class notation to standardize data interfaces – including data from sensors – for system integration as well as the Cyber secure class notation to verify the security of IT and OT systems in line with IMO requirements and above.

But Goksøyr says digitalization will also require an industry shift towards responsive real-time risk management and an open data platform for integration of ship systems as these become more automated and interconnected, aligned with human-centred design of such systems. “Changes in the human and organizational aspects are also needed, alongside the technical shift, to ensure maritime systems are robust and resilient with a process in place for continuous safety improvements,” he says.