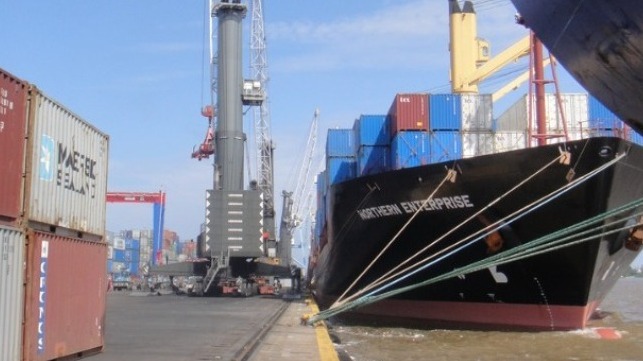 The Nigerian Ports Authority (NPA) says is currently considering granting terminal operators in Apapa Port and Tin Can Island Port in Lagos the option to rebuild the dilapidated ports, while NPA in turn, amortise and extend the tenure of the terminal operators’ leases.

Acting Managing Director of NPA, Muhammed Bello-Koko said the two ports are not going to be expanded in terms of landmass because this would imply taking over people’s homes, offices, and pay compensations.

Bello-Koko who said the Minister of Transportation, Rotimi Amaechi had directed NPA to look at the possibilities of the reconstruction of the two ports noted that the only way to bring bigger vessels to Lagos ports is by deepening the Channel as well as rebuilding the Quay walls and building IT infrastructures.

Currently, he said the Quay walls have design limitations of 14 meters. This has made it impossible to dredge the Channel and Quays below 13.5 metres. Meanwhile, to bring bigger vessels of 16.5 or 20 meters which are the modern-day vessels sizes because of economies of scale, the channels must also be dredged deeper.

“This means there has to be a financial cost-benefit analysis on the cost implications and then what is the revenue that is likely to be driven for such decisions to be taken?

“We have in recent times, instructions from the Honourable Minister of Transportation, that we look at the possibilities of the reconstruction of the ports and we have been holding stakeholder meetings.

“A Committee was set up to explore the best way to do it. Do we reconstruct the ports in Lagos maintaining the same Quay walls at the same depth? Or should we deepen it? A Consultant has been engaged to look at the whole of Tincan and Apapa and look at where there are the physical deficiencies in terms of the integrity of Quay walls; what are the civil engineering works that need to be done.

“And what needs to be done to modernise the ports is, first of all, in terms of physical infrastructure before the IT infrastructure will be discussed. The idea here is to take a decision to determine how it is carried out while we also look at the funding options.

“But whatever the terminal operators bring, we will have to sit down and look at it. But what is the implication in terms of the cost of dredging and maintaining the channel to that 16.5 metres and then what is the cost of reconstructing the Quay to the depth of that 16.5 or 17 meters?