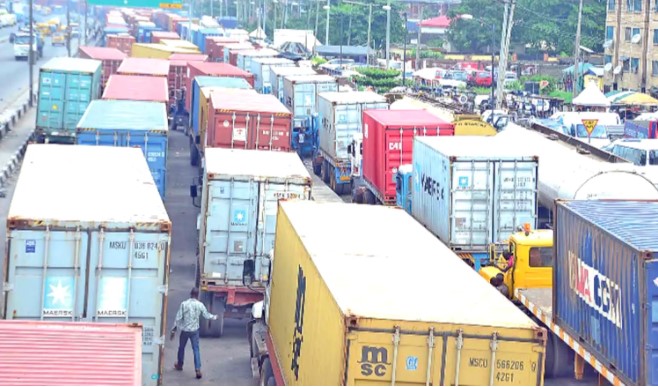 AGAIN, motorists and commuters were stranded in traffic, yesterday, for hours as truck drivers parked indiscriminately along the Oshodi-Apapa Expressway, while miscreants took over control of the movement of truckers.

The latest development was said to be a result of the decision by the management of the Nigerian Ports Authority, NPA, to shut out truckers from gaining access into the port areas, a claim faulted by the NPA.

The situation was also said to have been compounded by the effect of last week’s clash between members of the National Union of Road Transport Workers, NURTW, and Road Transport Employer Association of Nigeria, RTEAN, over control of parks and collection of access fees from truckers.

At least three people lost their lives in the violent clash which left several vehicles destroyed.

According to a source, 100 suspects were subsequently, arrested and taken to unknown military Barracks by men of the Nigeria Army, following the alleged killing of a soldier during the clash in the Mile-2 area, along Oshodi-Apapa Expressway.

The gridlock, which started from last Friday, continued yesterday, as truck drivers parked indiscriminately from Second-Rainbow, Fatgbem Filling Station to Otto-Wharf with miscreants collecting bribes at different checkpoints along the road.

A member of the Lagos State Traffic Management Team set up by Governor Babajide Sanwo-Olu to restore sanity in Apapa and environs, who spoke to Vanguard in confidence, said that the gridlock was a result of the management of NPA preventing truckers from making use of the port, leading to a backlog of trucks on the expressway.

It was also gathered men of the Lagos State Traffic Management Authority, LASTMA, have embarked on skeletal duties due to intimidation and fear of being attacked by warring transport union members.

Men of the Nigeria Police were also absent from the road as officers could not be seen at strategic points to restore law and order.

Chairman of the Lagos State Traffic Committee, who is also the Special Adviser to Governor on Transportation, Oluwatoyin Fayinka, when contacted, blamed the development on the management of NPA, which has refused to make efficient use of the Electronic-call up system, leading to the breakdown of the operation.

Fayinka said: “I have directed our officers to deal decisively with truckers parking on the highway by impounding their vehicles. Let me assure you that the situation will improve by Monday (Today). We are working hard to restore the situation to normal.”

However, contrary to reports that the Tin-Can Island port was shut down on Friday, hence the heavy traffic situation in the Mile-2 end of the Apapa-Oshodi Expressway.

On its part, the Nigerian Ports Authority, NPA, has debunked the report, saying “it is alarmist to say that the ports have been shut down.”

Assistant General Manager, Corporate and Strategic Communication Department of the NPA, Mr. Nasiru Ibrahim said that there was no such development of the port is shut down.

Ibrahim said: “The Managing Director was at the port last Friday to inspect the damage done to the electronic barricade by hoodlums. Whoever is saying that is only trying to raise a false alarm.”

Also speaking to Vanguard on the development, a member of the National Executive Council, NEC, National Association of Road Transport Owners, NARTO, Mr. Inuwa Mahommed said: “The electronic system that is supposed to regulate the movement of trucks has been hijacked by various interest groups. From my assumption, if you have a valid call ticket, nothing will disturb you from accessing the port but now there are so many interest groups that when a truck is coming, there are many blockades from these interest groups.”

Meanwhile, the Chief Operating Officer of the Truck Transit Park, TTP, Mr. Dayo Adeboye attributed the heavy traffic situation to the construction works going on in that axis.