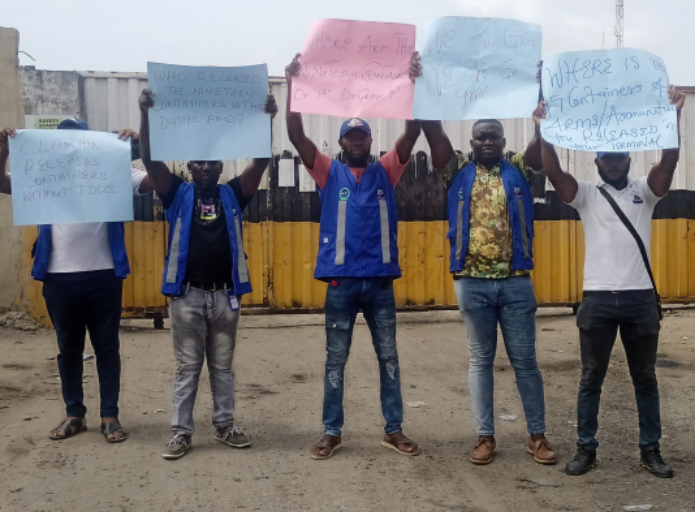 Some clearing agents on Tuesday staged a protest at Clarion bonded terminal located in the Alakija area of Lagos over alleged missing containers.

Operations at the terminal were halted due to the protest.

The protesters claimed that 19 containers were “missing” or “dubiously cleared” from the terminal while 14 vehicles were allegedly seized by the management.

Explaining the reasons behind the protest, one of the agents named Godswill Ojogwu, said his license was used illegally to clear the missing containers from the Tin Can Island port.

He said, “I am a retired Assistant Comptroller of Customs and on my retirement, I started a freight forwarding company, Ajaji Continental Limited. I’m also a member of NAGAFF.

“When I approached Clarion to show me who used my agency, they almost mobbed me when they seized about 14 vehicles duly released by Customs. I approached Clarion with documents showing proper clearance from Customs and the shipping company, urging them to release the containers while we continue the investigation on the mystery 19 containers. Clarion bluntly refused as they demanded that I pay over N8 million demand notice on the missing containers.

“They are linking the 14 vehicles seized to the 19 containers they used my license to clear via a company known as First Degree Multinational Limited. MSC was the shipping company used for that transaction. There is no way goods would leave the port without due process but this was done in a shady manner.

“I wrote to the Area Controller of Tin Can Customs but my documents allegedly got missing on three occasions at Customs. All efforts to find out how this problem emanated have been futile.”

Another agent, Ibrahim Tanko said the issue of the missing containers has lingered for more than a year, calling on relevant authorities to investigate it.

The management of Clarion bonded terminal did not respond to inquiries on the allegation.