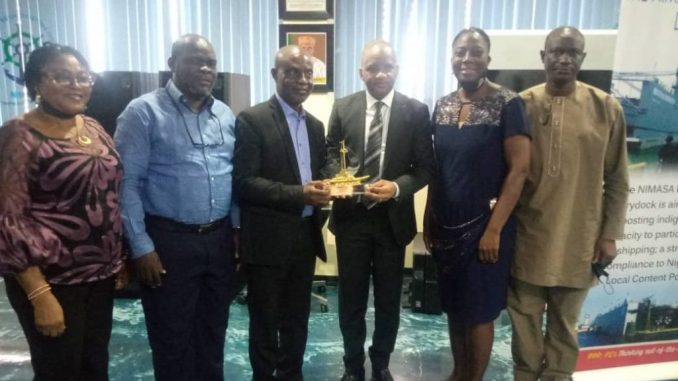 NIMASA DG Jamoh (third from right) presents a plague to Mr. Adeleye Ajayi during the visit.

According to the director-general, 783 million dollars had been lost to piracy in the Gulf of Guinea.

Bashir made the statement during a courtesy call by the executive of Nigeria Union of Journalists (NUJ), Lagos State Council, led by the Chairman, Mr. Adeleye Ajayi to the NIMASA headquarters in Lagos on Wednesday.

“We have recorded a drastic reduction in piracy and this is enough for us to beat our chest and that we are ready to return to the category ‘C’ of membership of International Maritime Organisation (IMO).

“However, the year 2021 has witnessed a significant turnaround under my leadership as Insecurity on Nigerian waters had reduced by 80 percent,” he said.

Jamoh said that the last time the country had a drop in piracy attacks in the nation’s waterways was in 1994, saying that Nigerian waterways were one of the top 10 safest in the world.

He noted that this achievement was enough reason to sensitise and inform the international community that the Nigerian waterways were now safe than ever before, as Nigeria must take its rightful position among the comity of nations globally.

“We want the cost of Insurance Premium paid by Nigerians as a result of insecurity to be reconsidered as insecurity in the country’s waterways had drastically reduced, ” Jamoh said.

He lauded the agency for working toward the actualisation of the Blue Economy, adding that the aim and target of the agency were to see that the Blue economy was harnessed to the maximum.

“We have eight coastal states in the country and we want these states to develop their potential in order to contribute to the country’s revenue,” Jamoh added.

In the area of professional reportage, the director-general appealed to journalists to be mindful of what information they release to the public.

“Our priority as a nation should be striving to project positive reports that will project Nigeria in better light to the international community as done in advanced countries,” the NIMASA boss said.

Jamoh said that journalists, especially those covering Maritime beats should always hear both sides of a story before going to town with information.

“We cannot achieve much without the media, especially in the area of educating people.

“The role of the media in any society cannot be overemphasized as no agency or society can function effectively without the press because the media helps in shaping public opinion.

“Another election in the Global Maritime Industry (IMO) will hold in November 2021 and I urge the media to showcase achievements of Nigeria to the world before then in order to put Nigeria at the forefront globally.

Jamoh lauded the efforts of other 19 African countries including Nigeria at tackling social vices in the Gulf of Guinea.

The director-general who happily received the executive members of Lagos NUJ described the visit as a homecoming for Ajayi who served as President,  Maritime Reporters’ Association of Nigeria (MARAN) between 2009 and 2011.

On his part, the NUJ Chairman assured NIMASA of regular publicity as well as a robust relationship between the Lagos Council of Nigeria Union of Journalists and NIMASA.

He lauded NIMASA for the giant strides it had achieved in the Maritime sector which included safeguarding of Nigeria’s waterways, collaboration with sister agencies of government as well as donations worth millions of naira to the Internally Displaced Persons’ Camps and victims of the disaster in the country.

Ajayi also presented pressing issues of the union before the management of the agency, not forgetting to seek sponsorship for its fast-approaching Press Week scheduled to hold in October 2021.

Other management staff of NIMASA present at the event were  Mallam Shehu Ahmed, Executive Director, Operations; Mr Ubong Essien; Special Assistant, Communications and Strategy to the Director-General; and  Mr.Edward Osagie, Assistant Director at the agency.