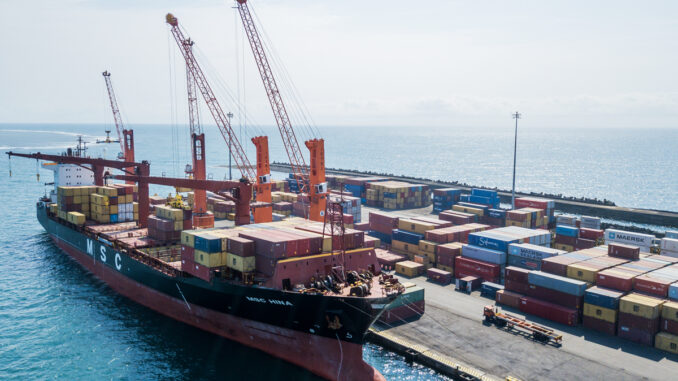 Like many other national oil companies (NOCs) in Africa, Ghana National Petroleum Corp. (GNPC) has mostly served as a minority partner in upstream projects. That is, it has represented the Ghanaian government’s interests in contracts with foreign investors and collected a share of the money earned from those contracts, but it hasn’t led the way in exploration and development activities.

Officials in Accra are hoping to change that. In late October, Dr. Kofi Karduah Sarpong, the CEO of GNPC, explained that his company was working to expand its stakes in two major offshore blocks because it wanted to gain the ability to develop oil and gas reserves on its own.

“We have to build the capacity of GNPC to become an operator,” he recently told journalists. “If we do that, 15 years from now, we should mature and stand-alone.”

This is an ambitious goal, and we at the African Energy Chamber salute GNPC for its ambition. We wish Dr. Sarpong success and look forward to the day when GNPC and other African upstream operators are reaping the lion’s share of the revenues generated by upstream oil and gas operations.

But we also agree with Dr. Sarpong that this is a goal that can’t be achieved quickly. It’s a long-term prospect and a steep uphill climb that will require a great deal of internal investment and capacity-building.

Nor is it a target that every African state should try to hit. Some countries lack the resource base to justify the establishment of a NOC with the capabilities GNPC is hoping to develop. Some countries may choose to follow a different model for the management of hydrocarbon reserves — something more akin to the strategy used by Guyana, the South American state that has opted to let international oil companies (IOCs) assume all exploration and development costs rather than take an equity stake in its offshore blocks.

However, there are still opportunities for practically every state in Africa to support the oil and gas business in one way or another. The African Energy Chamber has been striving to drive home the message that oilfield service providers (OSPs) have an important role to play. Oilfield services aren’t limited to specialized, technology-intensive services such as drilling or seismic surveys carried out under direct contracts but also include non-specialized, labour-intensive services such as catering and cleaning carried out under subcontracts. That’s why we dedicated an entire section of our 2022 Africa Energy Outlook to demand and prospects for OSPs in the near term and through the energy transition. We want African countries— and African companies — to explore these opportunities!

Opportunities in Shipping and Logistics

One particular area where African companies can stand out is in shipping and logistics.

On the one hand, the demand for these services is both tremendous and inescapable. Shipping and logistics operators serve as crucial links in the oil and gas supply chain, in that they are responsible for moving goods, parts, equipment, and workers from the places where they can be picked up to the places where they are needed.

Some of these operators have found that oil and gas development can serve as the foundation of a successful business. Universal Africa Lines Alliance (UAL Alliance), for example, began delivering cargo to West Africa in 1973 and has now established itself as a stable provider of professional cargo handling services, focusing on break-bulk and project cargoes for the oil and gas industry. UAL Alliance moves cargo between the U.S. Gulf of Mexico and Europe to West Africa and vice versa and also offers intra-African service on the west coast of Africa.

UAL Alliance is an international firm, but it is also firmly rooted in Africa, as it serves ports in Ghana, Nigeria, Gabon, Equatorial Guinea, and Angola. What’s more, it has also constructed the K5 Freeport & Oil Centre, its own logistics and supply base at the port of Malabo in Equatorial Guinea — and in doing so, it has helped to create additional jobs for the contractors and subcontractors that helped build the base, as well as the companies that now use the base. It has also helped sustain the African companies that have acted as its shipping agents, such as Akon-Donluis in Equatorial Guinea, Action Rapide Transit (ART) in Gabon, and Logistics Support Services (Pty) Ltd in Namibia.

Oil and gas exploration and development off the west coast of Africa has already kept UAL Alliance busy for nearly 40 years, and the company is looking to grow over the next few years. It has said it hopes eventually to set up shop in East Africa — presumably, so that it can start offering the same kind of services and support to emerging hydrocarbon producers such as Mozambique, Tanzania, and Uganda.

And UAL Alliance is far from the only indigenous shipping and logistics firm in Africa seeing success in the oil and gas sector. Many others were heavily represented at African Energy Week in Cape Town and some signed deals with international oil companies. A few additional examples include Nairobi-based OML Africa Logistics and Luba Freeport, which provides oilfield equipment handling and transportation in Eastern Africa; Seabird Ghana, maritime logistics and oil and gas services provider for West Africa; and Petromarine Nigeria Limited, a marine logistics services provider for Nigeria’s oil and gas industry.

We’re also seeing African states take proactive steps to support successful oil and gas maritime logistics operations. Look at Senegal, which is constructing a high-tech, operationally efficient “superport” near Ndayane, 50 kilometres southeast of Dakar. The project dubbed the “Port of the Future,” is part of the country’s energy sector expansion, launched after the discovery of approximately 450 billion cubic meters of natural gas. What’s more, Senegal is taking steps to make sure that everyday people benefit from its growing maritime infrastructure by building local capacity. Macky Sall’s Plan Senegal Emergent is specifically designed to, among other things, create opportunities for local service companies. Senegal also is fostering capacity building in maritime logistics through its National Petroleum Institute and the Dakar Business School. Aguibou Ba is the Executive Director of the Institut National du Pétrole et du Gaz (INPG), has also implemented related programs to fast track capacity in this area through the state institute.

Another positive example is Mozambique, which is developing a national strategy for a blue economy that addresses, in addition to fishing and aquaculture, the country’s extractives and hydrocarbon sectors. The plan will also include a regional plan for maritime security. With a plan in place, hopefully, followed by policies that support local entrepreneurs and capacity building, Mozambique OSPs will be in a strong position for success in maritime logistics.

The African Energy Chamber believes there are numerous opportunities available for African companies and entrepreneurs who are ready to explore the shipping and logistics sector. Now is the time to seize them.