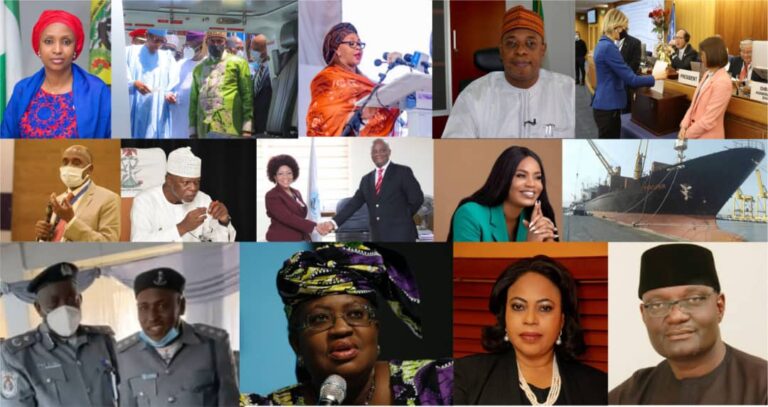 As the year 2021 draws to a close today, SHIPS & PORTS has compiled the list of the top stories of the outgoing year.

Without a doubt, the maritime story that gained the most attention of the public in the outgoing year was the suspension of Hadiza Bala Usman as the Managing Director of Nigerian Ports Authority (NPA) by President Muhammadu Buhari on May 6, 2021.

President Buhari also approved the appointment of the Executive Director Finance and Administration, Mohammed Bello Koko as the Acting Managing Director of NPA and the setting up a panel of inquiry to probe the activities of the authority under Bala Usman.

Almost eight months after Bala Usman’s suspension, the administrative panel of inquiry set up by the Minister of Transportation, Rotimi Amaechi, to probe her tenure has not submitted its report while Mohammed Bello Koko has remained in acting capacity. You may read more of the story here.

President Muhammadu Buhari made his first ever visit to any seaport in Nigeria on June 10, 2021 to commission Nigeria’s $195million maritime security project known as the Deep Blue Project , which he said would serve as a benchmark for other countries in the Gulf of Guinea. While the deep blue project initiated by the Federal Ministry of Transportation has helped in reducing attacks; piracy and sea robbery remain major threats to shipping in Nigeria’s exclusive economic zone and internal waters.

Another major story of the year was the disgraceful outing recorded by Nigeria at the International Maritime Organisation (IMO) General Assembly in December 2021. The Nigerian Maritime Administration and Safety Agency (NIMASA) led Nigeria to another IMO Council election defeat at the IMO General Assembly for the fifth consecutive time.

Other major maritime stories that gained traction on our website in 2021 include the stoppage of the proposed salary increase of NIMASA staff by the Minister of Transportation, Rotimi Amaechi; frequent failure of the Customs server managed by Web Fontaine, the election of Nigeria’s Captain Sunday Umoren as Secretary General of the Abuja Memorandum of Understanding (MoU) on Port State Control; appointment of Iroghama Obuoforibo to succeed her father Engr. Greg Ogbeifun as the CEO of Starzs Investments; and the ban placed on government officials from receiving gifts from ships visiting Nigerian ports.

A viral video of an awkward newly promoted Customs officer; the account of former Finance Minister, Ngozi Okonjo Iweala on how she was victimised for cancelling the controversial Cargo Tracking Note (CTN); the nomination of the Chairman, Seaport Terminal Operators Association of Nigeria (STOAN), Princess Vicky Haastrup as the Lagos Man of the Year; and the appointment of Hon. Emmanuel Jime as the Executive Secretary/CEO of Nigerian Shippers’ Council (NSC) also gained the attention of the public in the outgoing year.