Takeaways from a staggering year in container shipping (2021) 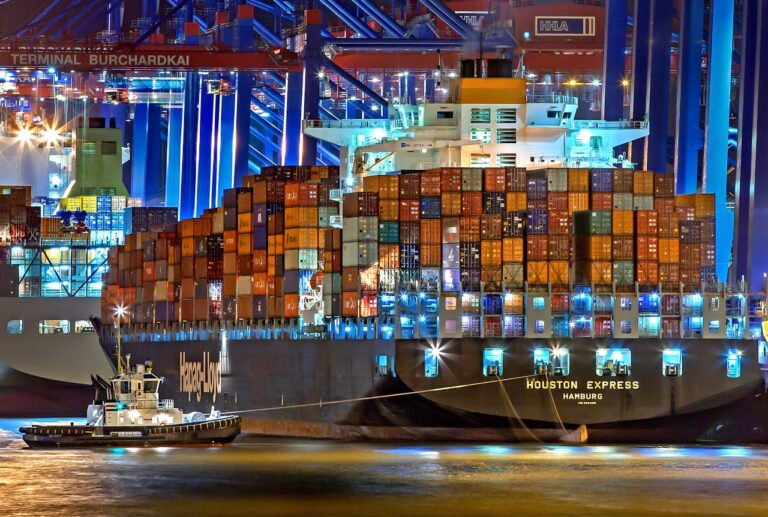 Among those involved in the industry, the importance of shipping is never in question. Without it, we wouldn’t live in the world as we do today. However, its importance is rarely acknowledged outside the shipping bubble, and most people do not give ships a second thought so long as things run smoothly. Now, the situation is changing as global supply chains are no longer invisible to outsiders. Here is why:

Container shipping this year has been thrown into a completely different place, first with the remarkable pictures of the Ever Given stuck in the Suez Canal and later the line of ships waiting in the San Pedro Bay filling mainstream media. However, what it really took to bring shipping out of the shadows was shockingly poor reliability and record-high costs, driven by the stop and then start nature of trade during the pandemic. The disruption in container shipping disrupted non-logistics departments and consumers due to delays, shortages, and spiralling costs. On the latter, the UN trade body (UNCTAD) estimates that increasing freight rates will lead to an average increase of 1.5% in consumer prices globally. 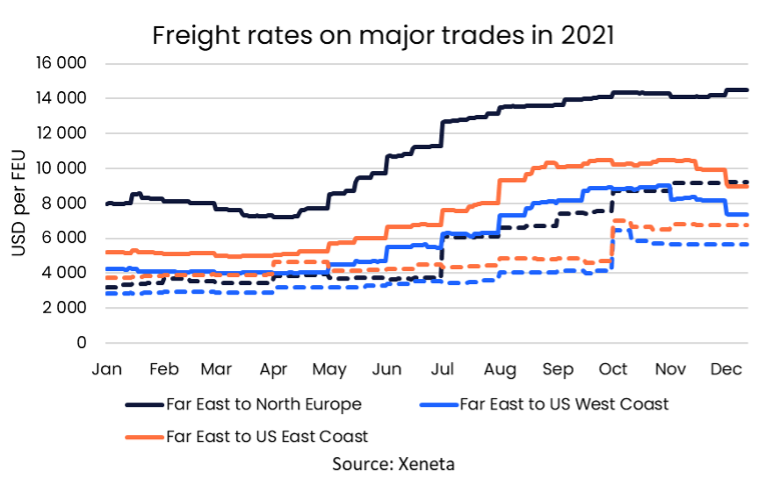 I: As Long As Reliability In Container Shipping Remains Low, Interest In It Will Remain High

Ensuring the flow of goods is integral to all parts of the companies involved in imports; if the logistics department can’t guarantee the time and place of goods delivery, they can’t sell them. What happens afterwards, though? Will a return to higher schedule reliability mean a return to the shadows for shipping, even if transport costs remain higher than they averaged in the past decade? Probably.

Yet the disruption from these past years means it’s unlikely for shipping to be forgotten quickly, especially within the companies where it can disrupt the wider business.

Furthermore, with decarbonization, an ever-growing priority amongst consumers and importers, container shipping’s slow progress so far on this front leaves it open to criticism and potentially negative publicity. No one is fully isolated in the global shipping industry. One outcome of shipping disruptions has been the public realizing how global and interconnected the world and container shipping are – Why does a backlog of ships in the US disrupt a European supply chain? Why does a container ship stuck in Egypt (the Suez Canal) affect consumers worldwide?

Summing it up on a very high level, record-high US container imports, driven by US consumers buying Asian-produced goods at an unprecedented level, explain much of the extraordinary situation in container shipping. Other contributors to the industry chaos include pandemic-related port closures and disruption to hinterland connections. As ships are by their nature mobile assets, they chase the trades they can earn the most money on, leading to two outcomes. Firstly, if rates on one trade suddenly shoot upwards, as was the case in the Far East to US rates, rates on other routes follow the trend to keep them attractive to ship operators – otherwise, they just move the ship. Adding on to this effect, some operators decided that despite higher freight rates on their usual trade lane, they still prefer to send their ships to the most lucrative market.

Reverse cascading saw smaller ships, which had in past years been pushed down to secondary trades when larger ships were delivered, deployed on the transpacific trade lane.

This, in turn, reduced the capacity on their previous trade lane driving freight rates up here while doing little to help solve the transpacific problems. The extra ships got stuck at anchorages, some of which set sail without the necessary agreements with terminals.

Lastly, a delay at destination ports means that ships are often late to start their next scheduled (origin) departure, leaving carriers with a blank sailing option or finding another available ship. This left everyone scrambling to get hold of the spare capacity available on the charter market or taking ships out from another trade.

II: Capacity On The Water Is There, Bottlenecks On Land Need To Be Solved

The fact is that the actual ship capacity would have managed the demand if the conditions on land remained stable. Compared to 2019, rather than pandemic-affected 2020, volumes in the first ten months of the year grew by 5.5%. On the other side of the supply/demand balance, the capacity of the container ship fleet grew by 7.4% in the same period. In other words, the current situation in the freight market can’t be explained by ‘simple’ market fundamentals. Instead, onshore bottlenecks and the resulting long waiting times at ports have soaked up a considerable amount of capacity, reducing the number of trips a ship can make. In the first ten months of 2019, a TEU of nominal capacity carried an average of 6.2 loaded containers. This number has fallen to 6.0 in the first ten months of 2021, not a massive fall, but enough to make a difference when scaled up to the whole fleet. 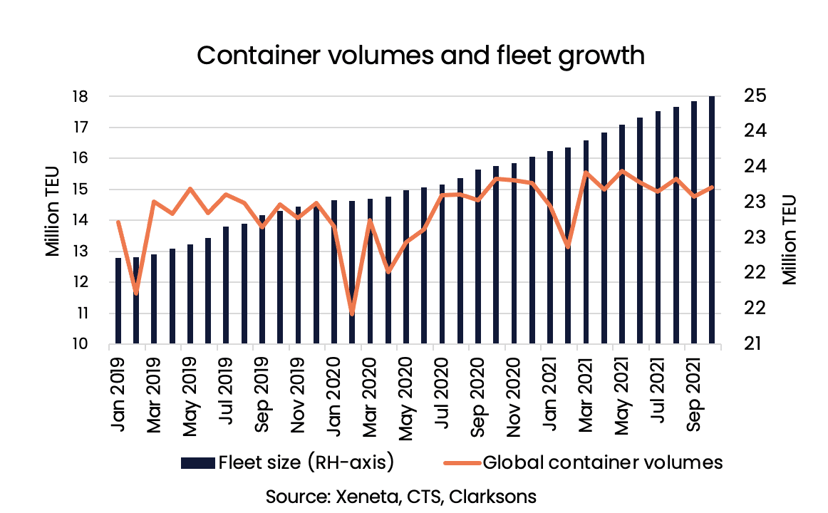 Many new ships, ordered this year, will be delivered from 2023 onwards and will add capacity on the sea. However, unless ports and hinterland connections can ensure the free flow of cargo, end-to-end, these extra ships will instead just join the queues outside the ports – just as we have seen with the extra loaders added on the transpacific in the past few months.

The directly pandemic-related disruption such as port closures in China will remain a threat as long as the virus circulates and -perhaps more importantly- if China sticks to its zero-COVID strategy. The more significant problem that needs tackling is that the infrastructure can’t cope with the higher volumes coming through, such as in the US. Large-scale spending into the whole onshore part of the supply chain is needed to tackle the above challenge, but it won’t solve the problem overnight. The fact that capacity on the sea hasn’t been the limiting factor this year means the new ships being delivered in 2023 won’t solve the underlying problems brought to light this year.

III: Long-term Contracts, Reliability, And Relationships Are Key To Successfully Navigating This Year (And Next)

The tumult of the past year has redefined what a successful outcome is when it comes to managing logistics. Previously the commoditized nature of the market meant it was very much a question of securing the lowest possible price.

However, when the supply of goods is threatened, price becomes secondary – with success primarily depending on the timely delivery of goods.

Reliability will be key to navigating 2022. Consider those shippers who fixed long-term contracts for this year at the end of 2020 or the start of 2021. Rates fixed at that time were high compared to historical rates but far from today’s rates.

So long as these shippers kept to the number of contracted boxes, they were still enjoying relatively low rates. Their problem came when they had extra volumes. In the past, carriers were flexible on this, allowing the extra boxes onboard, but that flexibility was gone this year, leaving these shippers to fight for space on the spot market and swallow the higher rates. The more exposed you were to the spot market, the harder the past year has been.

Revenue per TEU reported by some carriers in their earnings reports shows this difference between rates being fixed today and what most boxes onboard ships are shipped for. In Q3, Maersk reported average revenue of 3 561 USD/FEU, while Hapag Lloyd reported 2 234 USD/TEU.

Developing a good relationship with carriers, viewing it more as a strategic partnership than a game that can be won by securing the lowest price, will insulate shippers from some of the risks and black swan events that 2022 doubtless holds in store.

Stability and predictability can also be achieved by signing multi-year deals, that few carriers are currently pushing for, as it guarantees the capacity. However, to avoid paying today’s rates after the market softens, these contracts must include some adjustment mechanism to reflect future market conditions.

In today’s market and with the prospect of signing these kinds of deals, keeping track of the market and having access to reliable data becomes even more important for shippers. Stay tuned for the second part of this blog series to explore more triggers and outcomes of the global supply chain disruptions so far. In the meantime, if you want to get access to rate intelligence that can help improve your freight procurement strategy, contact us to find out how Xeneta can help you stay one step ahead of the volatile container shipping market.
Source: Xeneta (https://www.xeneta.com)