The evolution of ship design 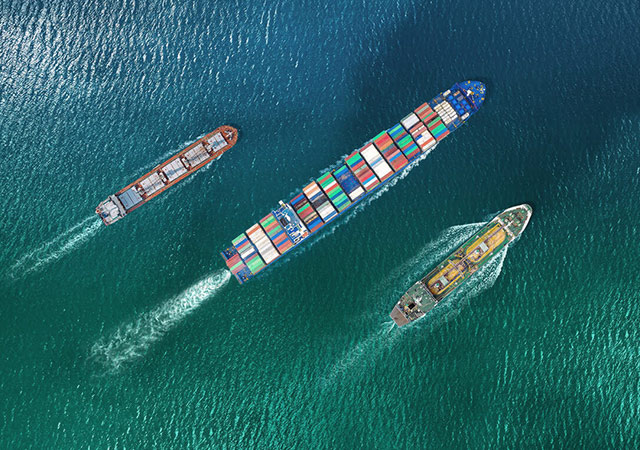 What are some of the key milestones in ship design and which trends are at the forefront of research and development today? Experts from DNV look back on momentous developments and share what is needed to design future-proofed ships.

Maximum efficiency at optimized speeds, sufficient engine power with future-proof propulsion solutions that promise lower emissions – today, when a vessel hits the water, its design has already met a whole matrix of parameters to get to this point. Never before have ship designers had so many tools in their arsenal, and never before have they faced greater challenges in making sure their products are fit for the future. Together with experts from DNV Maritime, we take a look at some of the key milestones in ship design and which trends are at the forefront of research and development today.

Until the early 2000s, around 95 per cent of vessels were built to a single point design. This meant that the vessel’s hull shape, bow and engine capacity would perform excellently at one specific speed and draft – making it perfect for its particular contract condition. “This is what vessel performance was measured against. Nobody guessed how much ship efficiency would be affected when vessels travelled at slower speeds and at 70 or just 50 per cent cargo capacity. For container vessels in particular, efficiency losses were devastating,” explains Uwe Hollenbach, Principal Engineer Fluid Engineering at DNV Maritime. Prompted by the ambition to cut costs and maximise efficiency, designers realized that with relatively small changes, you could boost ship efficiency by 5 to 10, sometimes even 20 per cent, which for large deep-sea vessels equalled up to one million US dollars in savings per year.

Container vessels were some of first to move away from single point designs, but by far not the only segment. “All deep-sea vessels were affected by the downsides of single point designs. Tankers and bulkers travelling back from destinations empty could use more fuel carrying ballast than fully loaded,” adds Heikki Hansen, Team Leader Fluid Engineering at DNV Maritime. Something needed to change, and it did.

From around 2008, new ship designs no longer focused on one operating point. Instead a range of speeds and drafts, typically consisting of four (2×2) to nine (3×3) modes of operation, were married into the final design. “In collaboration with the owner, you devised a varied operational profile in a matrix model, defining how much time the vessel was most likely to spend travelling at particular speeds and drafts. On the one hand, this meant that you would no longer have the perfect vessel for a single mode of operation. However, the designs were far more flexible and met the demands of different voyages, weather conditions and load capacities,” says Uwe Hollenbach. The optimized lines result in reduced resistance, less power demand and greater overall efficiency.

But what about all the vessels already in operation, which were created on the basis of single point designs?

“This is where the small changes came in. On a vessel in operation, you can’t touch the hull shape as a whole; that would simply be too expensive. What you can change is the shape of the bow,” says Heikki Hansen. Wave resistance is very dependent on the shape of the bow and how deep it enters the water at varying speeds. Single point designs often had very voluminous bows. With an optimized, slender shape, it’s possible to generate fuel savings of 6 to 10 per cent. Other optimizations include new propellers and changes to the propulsion system. However, these are less common.

In light of regulations such as the Energy Efficiency Design Index (EEDI) for newbuilds and the incoming Energy Efficiency Design Index for existing ships (EEXI), there is a renewed focus on vessel efficiency. And in combination with the IMO’s Carbon Intensity Indicator (CII), these regulations have ramped up the pressure on shipowners to meet emission reduction targets.

While the EEDI and EEXI are one-time certifications, the Carbon Intensity Indicator demands steady progress. It measures how efficiently a ship transports goods or passengers and is given in grams of CO2 emitted per cargo-carrying capacity and nautical mile. The ship is then given an annual rating ranging from A to E, whereby the rating thresholds will become increasingly stringent towards 2030. For all internationally trading cargo, RoPax and cruise vessels above 5,000 GT, the CII takes effect in 2023. This has had a profound impact on demands for ship designs.

Owners looking to renew their fleet face difficult decisions. How do you choose the right fuel option for the future when there is still so much uncertainty about the technology and availability of carbon-neutral fuels? “The implementation of the EEXI and CII still needs to be decided in detail, but the cut-off points for different vessel profiles are already clear,” says Juryk Henrichs, Principal Engineer Safety & Systems Engineering at DNV Maritime. For example, standard designs using conventional HFO without further measures could be non-compliant as early as 2023 and would have to take immediate action by implementing alternative fuels or reducing their speed. With an adopted speed profile these vessels can operate until 2026 before any other measures need to be applied (see figure). “But this only takes you so far. If you’re looking to operate your vessel for the next 10 to 20 years without any major adjustments, your newbuild needs to be equipped to run on an alternative fuel, and have an optimized hull shape and other measures to reduce fuel consumption.

This is why we currently see many so-called ‘ready designs’ hitting the water,” he explains. Ready designs allow a vessel to switch to operations with an alternative fuel at a later date. An arrangement that is ready for the later use of LNG, for example, requires a dual-fuel engine and more space for additional and bigger LNG tanks, because of LNG’s lower volumetric energy density. Tanks also require insulation to ensure that LNG can be carried at its storage temperature of -162°C; and you need double-wall piping systems. “All these considerations mean that it can cost 10 to 20 million US dollars more to build a large deep-sea LNG-fuelled vessel. However, building an LNG-ready design means owners don’t have to make this investment straight away, and it will be easier to convert the vessel to LNG operations at a later date,” says Uwe Hollenbach. DNV offers a range of class notations that cater to this need, including “LNG ready” and the recently launched “Fuel ready” notation, which is applicable for ammonia, LNG, LPG and LFL (methanol) as a ship fuel – either individually or for more than one fuel at the same time. In addition, DNV’s new “Gas-fuelled ammonia” notation provides owners looking to build ammonia-fuelled vessels the option to start today.

Uncertainty about fuel pathways has also boosted interest in other propulsion solutions – some old and some new. Wind-assisted propulsion, for example, is experiencing a renaissance. Advanced aerodynamics science in combination with computer technology has produced a number of sails with great potential. Currently, the most commercially available application of sails are rotor sails. Using a rotating vertical cylinder, they take advantage of the so-called Magnus effect: Wind hitting the cylinder on board a moving ship from the side creates forward pull. Several applications on commercial vessels have enabled fuel savings of 10 to 20 per cent. The systems are computer-controlled and can withstand harsh weather conditions.

Air Lubrication Systems (ALS) are another promising technology that can help vessels improve their efficiency and reduce energy losses. These systems push air out under the ship’s hull, spreading it out evenly and creating a slippery layer between the hull and the seawater. “Air has a lower viscosity than water; this is why the air reduces the drag force on wetted surfaces of the hull. This way vessels can reduce CO2 emissions by 5 to 10 per cent and save fuel,” explains Heikki Hansen. In the years ahead, decarbonization will continue to shape the future of ship design. “It will be interesting to see how the industry adapts to the challenge of fuel flexibility and whether solutions such as innovative sails or air lubrication become standard tools for getting ahead in the constant struggle for greater efficiency.”
Source: DNV