The risk of cargo liquefaction 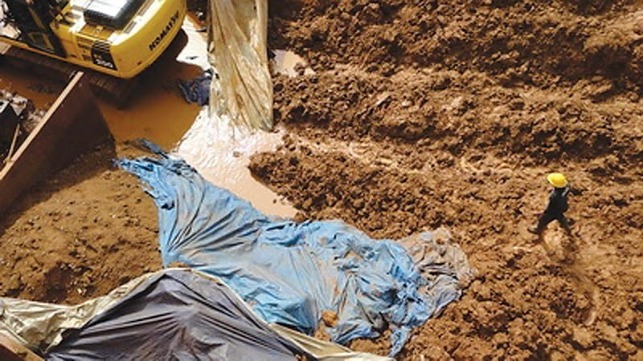 A soaking-wet stockpile of nickel ore, one of the cargoes most prone to dangerous liquefaction (Gard file image)

Some bulk cargoes can cause cargo liquefaction if the moisture content exceeds a certain level. Cargo liquefaction occurs when dry bulk cargoes with high moisture content start to behave like liquids when the ship is moving. Such cargoes shift rapidly in the holds of a ship, resulting in free surface effect, making the ship unstable and potentially causing it to capsize.

This arises if the shippers do not comply with the testing and certification requirements that are required under SOLAS and the IMSBC Code 2009 [1] and designed to ensure that cargoes are loaded only if the moisture content is sufficiently low to avoid liquefaction occurring during the voyage [2].

Iron and other mineral ore as well as bauxite cargoes which are left in the open prior to shipment are subject to rain and weather conditions, which can increase the moisture content to dangerous levels. These problems related to wet cargo and moisture content particularly worsen during regional wet seasons. In cargoes loaded with a moisture content in excess of the Flow Moisture Point (FMP), liquefaction may occur unpredictably at any time during the voyage [3].

Some cargoes have liquefied and caused catastrophic cargo shift, vessel roll and dangerous instability almost immediately on departure from the load port. Some have only caused problems after several weeks of apparently uneventful sailing. While the risk of liquefaction is greater during heavy weather, in high seas and while under full power, there are no safe sailing conditions for a cargo with unsafe moisture content. Liquefaction can occur unpredictably even in relatively calm conditions on a vessel at anchorage or proceeding at low speed. Given this unpredictability, it is of utmost importance that the length of voyage and prevalent and forecasted weather conditions do not serve to encourage the carriage on ships of cargoes prone to liquefaction with a Transportable Moisture Limit in excess of that which is accepted as safe for carriage.

It is for these reasons that SOLAS and the IMSBC Code[4] incorporate provisions intended to ensure that only cargoes with sufficiently low inherent moisture content to avoid liquefaction are loaded. Strict adherence to these provisions is the only safe way of carrying these types of cargoes.

The Bulk Jupiter was just one of a string of recent incidents involving cargo liquefaction. On January 2, 2015 Bulk Jupiter sank off the coast of V?ng Tàu, Vietnam. She departed from Kuantan, Malaysia on December 30, 2014 with a cargo of 46,400 tons of bauxite and a crew of 19 Filipinos.

The BMA as the Flag State Authority conducted a Marine Safety Investigation Report on the sinking of the vessel. The account of the vessel sinking from the investigations revealed  [5]:

The vessel received an email from their weather routing provider “FleetWeather” highlighting the adverse weather conditions expected in the region.

On the morning of the January 2, the Chief Cook awoke at around 0600 and proceeded to the galley to prepare for the first meal of the day. The weather was starting to deteriorate as the vessel was rolling more heavily than the previous day. The general alarm was sounded followed by an announcement by the Master directing all crew to proceed to the bridge. He felt the vessel suddenly starting to roll more heavily, particularly to starboard. The situation worsened quickly, and the Chief Cook together with the Master jumped into the heavy seas with lifejackets as the vessel sank.

There is significant documentary evidence showing that the 46,400 tonnes of bauxite loaded over the course of the 13 day period had an average moisture content of 21.3 percent [6].

An independent inspection was not requested by the Master to verify the properties of the cargo prior to loading on board. Considering the extreme weather conditions and storage facilities available it was acknowledged that the cargo was very wet and that measures to protect the cargo on shore from further rain were not effective in preventing further wetting. The absence of an independent inspection resulted in the cargo being loaded without its physical properties and moisture content being verified against the parameters of the IMSBC Code [7] schedule or the cargo declaration form [8].

Prior to loading, the cargo was stowed in an open stockpile for days when the port of Kuantan experienced record rainfall. The east coast of Malaysia had endured record-breaking rainfall over the month of December, recording the highest monthly rainfall in the history of Kuantan at 1806.4 mm over a 22-day period. Loading continued for an extended period of time through a combination of heavy rain and technical delays due to various crane faults.

The owners raised concerns to the Master about the moisture content, based on the reports from the Master stating that the cargo was wet [9].

The following email exchanges occurred on the 24th December between the Company ship manager and the Master stating “Since the cargo is very wet, would suggest to do Can testing as per IMSBC code. Although not listed in appendix A, it is better to be cautious.” In reply, the master wrote, “what do you mean by testing procedure please clarify.”

The Company replied with the reference to the test and a brief description as to how to conduct it, noting that “it is typically performed by an alert Master before loading any particular parcel of cargo.” The Master replied “Understood and found also in the IMSBC Code [10] thanks for the info”. The exchanges indicate a lack of understanding of the practical method of determining excessive moisture content of a bulk cargo.

Philip Teoh has been in legal practice in Singapore and Malaysia for the past 31 years handling both contentious and non-contentious areas. He is the Partner heading the Shipping, International Trade, Insurance Practice at Azmi & Associates Malaysia. He is an International Arbitrator with the key International arbitration centers of SCMA, LMAA, EMAC, ICC, LCIA, AIAC, KCAB and others.

[3] The FMP is the point at which a granular bulk material becomes fluid. A Flow Table Test (FTT) is conducted to find the FMP, with the TML calculated to be 90% of this figure. This is the maximum moisture level at which it is safe to ship the material; if the cargo is found to have a higher moisture content than the TML, it is strongly recommended that the cargo not be transported (unless the vessel is specially built for this) see: https://www.alsglobal.com/en/services-and-products/commodity-trade-and-inspection/inspection-_and_-supervision/transportable-moisture-limit-(tml)-_and_-flow-moisture-point-(fmp)

[7] IMO has approved a circular to warn ship’s masters about the liquefaction hazards of bauxite, and not to accept bauxite for carriage unless:

the moisture limit for the specific cargo is certified as less than the indicative moisture limit of 10% and the particle size distribution as is detailed in the individual schedule for bauxite in the IMSBC Code; or

the cargo is declared as Group A (cargoes that may liquefy) and the shipper declares the transportable moisture limit (TML) and moisture content; or

the cargo has been assessed as not presenting Group A properties.