The shipping carryouts from COP26 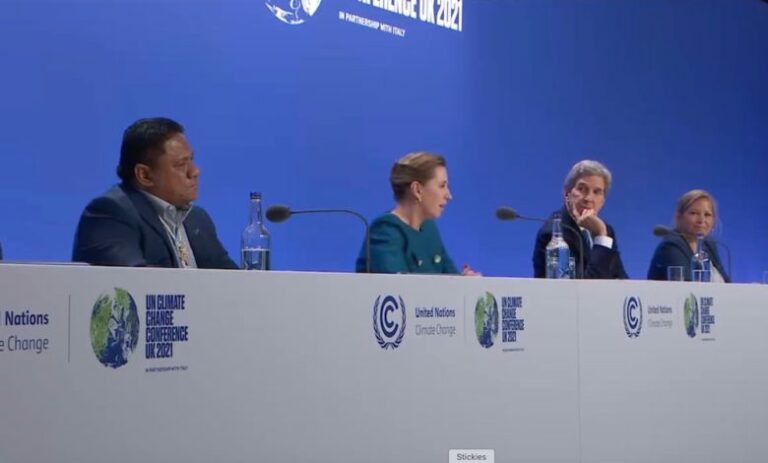 From the chilly, grey surroundings of Glasgow, the United Nations packed up its climate summit, COP26, yesterday, ready to head to the sunnier climes of Sharm el-Sheik on the Red Sea next year.

Negotiators had pushed nations to ratchet up their efforts to keep global temperatures from rising by more than 1.5 degrees Celsius this century compared with pre-industrial times.

The summit was described as “our last, best hope to keep 1.5 in reach,” according to Alok Sharma, the British government minister chairing the Glasgow talks. A final communique on what has been agreed by the 200 nations attending the talks has yet to be published, the declaration likely to be released soon.

For shipping, the past fortnight has been “intense”, according to one delegate doing the rounds around Scotland’s largest city. The industry now heads south to London and the headquarters of the International Maritime Organization (IMO) for the 77th gathering of the Marine Environment Protection Committee (MEPC) where the debate will ensue on tightening short and long term green targets.

There have been many headlines made in Glasgow, as this special COP26 archive shows, but how transformational the many maritime initiatives will turn out to have experts divided.

Alisdair Pettigrew, founder of UK-based BLUE Communications, and a regular COP attendee described this year’s edition as “seminal” for shipping.

Pettigrew recalled how in 2009 at COP15, the buzz was all around the unveiling of the Viking Grace, an offshore vessel powered by LNG. The past fortnight, by contrast, has seen industry executives attending events in Scotland clammer in near unison for a swift carbon levy and net-zero by 2050.

The Clydebank Declaration for clean shipping corridors has been the initiative that has attracted the most coverage this week.

Signatories to the Clydebank Declaration have agreed to work together to support the establishment of green shipping corridors, defined as zero-emission maritime routes, between two or more port pairs.

“Significant zero-emissions progress is happening under national and regional/plurilateral initiatives. We need multiple levers and not necessarily IMO and that seems to be happening,” commented Dr Tristan Smith, associate professor at UCL Energy Institute.

For Smith, of equal significance to the green corridor news was the Dhaka-Glasgow Declaration outlining the demands of more than 50 climate-vulnerable nations from Africa, Asia, the Caribbean, Latin America, the Middle East, and the Pacific.

“The potential is now clear to fundamentally change the arithmetic at the IMO,” Smith suggested.

Low ambition outcomes from MEPC 75 and 76 were the result of ambitious countries being in the minority, Smith argued, but at MEPC 76 only about five countries were the difference between minority and majority.

“You don’t need many of these 50 signatories to turn up to get fundamentally different outcomes in mid-term measures and strategy revision debates,” Smith said with an eye on MEPC 77.

Lasse Kristoffersen, CEO of Norwegian owner Torvald Klaveness, who participated in the International Chamber of Shipping’s Glasgow climate conference last weekend, made clear in a conversation with Splash that there is no longer anyone questioning if shipping needs to get to zero by 2050, only how.

“Business and private sector is moving faster than policies and regulations. Hence, IMO regulations will not trigger the kick-off of the transformation, but be critically necessary for global scaling of it,” Kristoffersen said.

The world will not decarbonise jointly and at the same speed, Kristoffersen pointed out noting how short sea has already started, and deep-sea will happen “piece by piece”, such as via green corridors or insets.

Kristoffersen made clear his opposition to LNG as a transitional fuel saying that its potential CO2 emission reduction was “too little too late”.

Kristoffersen also hit out at the lack of knowledge and competence on the path to zero and zero-emission fuels.

“A big challenge is that many players are saying there will be so many solutions, it is impossible to make any choices. This is not correct and if you do chemistry and physics for dummies, you will learn that it all starts with green hydrogen from green electrons,” he said.

There are many who have been watching this month’s climate deliberations for shipping with both scepticism and disappointment, not least Peter Nuttall, the scientific and technical advisor for the Micronesian Center for Sustainable Transport at the University of the South Pacific in Fiji.

“Despite all the hype and fanfare, COP26 has not delivered on the paradigm shift we so desperately need,” Nuttall said, suggesting negotiators had failed to make progress on the core issues of financing, on carbon markets and on ambition.

“Terminology like equity, leave none behind, loss and damage are now widely accepted, but the mechanisms to address them are not,” Nuttall said.

“It’s been intense,” commented Di Gilpin from the Smart Green Shipping Alliance as she packed her bags ready to leave Glasgow. “There have been tears. It’s been good to see people in real life and it’s been excellent that shipping has come together to address climate and nature emergencies. Good progress but much more to do to reduce emissions in the near term.”

An edited version of an article published by Sam Chambers at Splash247.com. The original can be found here