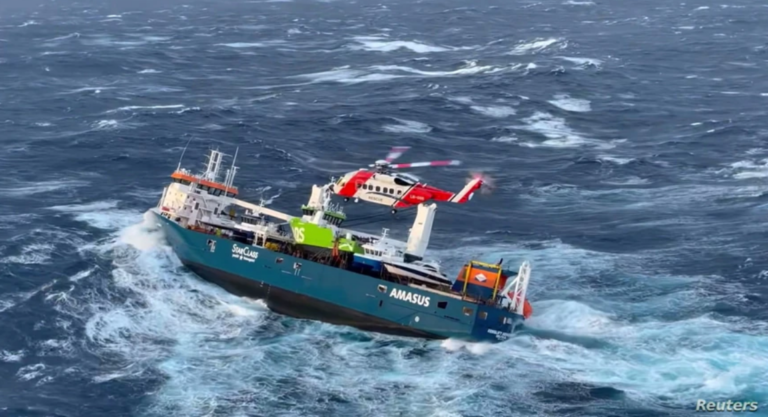 Norwegian search and rescue crews responded to a yacht transport ship that is listing after its cargo reportedly shifted off the west coast of Norway on Monday.

The heavy-lift cargo ship appears to be the MV Eemslift Hendrika belonging to Starclass Yacht Transport, which operates two vessels, including the Eemslift Hendrika, and offers regular yacht transport between Norway and Turkey.

Norway’s Joint Rescue Coordination Center reports receiving a distress signal from the vessel, which was located 60 nautical miles west of Ålesund, Norway with 12 crew members on board. The organization sent 3 helicopters and 2 vessels to assist.

SAR crews initially evacuated 8 crew members, leaving 4 remaining on board. However, an update later on Monday said all crew members have been evacuated and the ship is abandoned and listing by as much as 30 degrees.

The Norwegian Coastal Administration and the shipping company are reportedly working on a plan for the vessel.

One person was reported injured and taken to a hospital.

MV Eemslift Hendrika, built in 2015, is managed by Amasus Shipping B.V. and is registered in the Netherlands. AIS data shows the ship departed Bremerhaven, Germany on March 4 with a destination of Kolvereid, Norway.

A video of the vessel filmed from a SAR helicopter 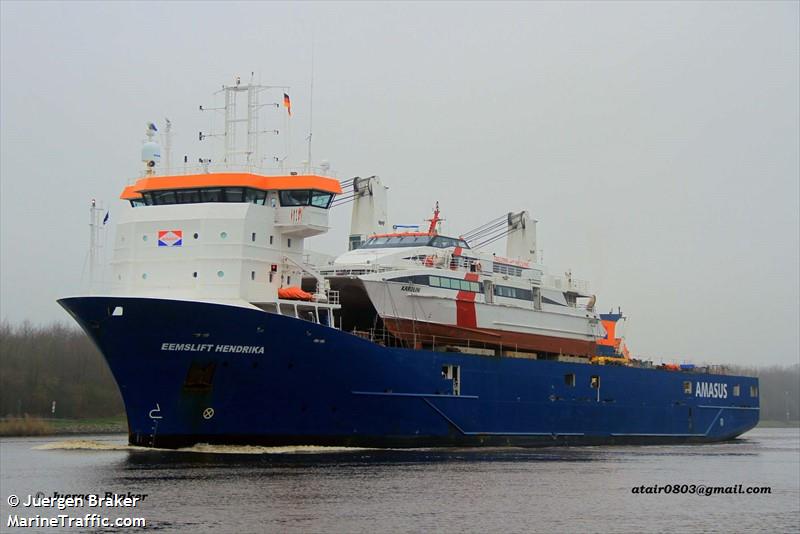 The Dutch-flagged heavy-lift cargo ship, the 4,200 dwt Eemslift Hendrika, called for assistance on Monday after the cargo aboard the vessel shifted in a storm as the vessel was sailing north along the Norwegian coast. The lift ship had departed Bremerhaven, Germany bound for Kolvereid, Norway. Norwegian rescue authorities report that the 336-foot-long vessel was approximately 60 nautical miles west of Alesund, Norway when parts of its cargo shifted causing the vessel to list between 15 and 30 degrees to starboard into heavy seas.

The Norwegian authorities initially dispatched three helicopters and two rescue vessels to coordinate the efforts on the scene. Arriving at the vessel, they reported seas were running 10 to 15 meters and winds were a strong to severe gale with maintained speeds over 40 mph.

Initially, it was decided to airlift eight of the twelve crew members from the vessel to Alesund. The captain and three crew members remained aboard during the day attempting to steer the Eemslift Hendrika into the weather and stabilize the cargo. The Norwegian authorities assisted by airlifting two bilge pumps to begin pumping out seawater that was leaking into the cargo hold.

The vessel’s owner told the Norwegian media that the situation was stable aboard the vessel, and they were hoping that the weather would subside so that the vessel could proceed to a nearby port.

Late reports from the Norwegian authorities however are that the weather had not calmed and by late in the day, the captain felt it was no longer safe for the crew to remain aboard. The captain and three remaining crew members were airlifted off the ship by a Norwegian SAR helicopter. Some reports indicate that one of the crew members was injured and was taken to a hospital.

The Norwegian Coastal Administration and the shipping company were reported to be working on a plan for handling the vessel in hopes that it would remain afloat overnight, and that the weather would calm sufficiently to permit a salvage effort.

Boskalis has confirmed that its subsidiary Smit Salvage has been hired to salvage the Eemslift Hendrika, which is currently adrift without a crew off the coast of Norway. A salvage team will be deployed as soon as possible by helicopter to board the abandoned ship. A heavy sea tug will also be taken to the ship that has gone adrift, says a Boskalis spokesperson.

Boskalis expects the salvage team to arrive as early as Tuesday 6 April, but it is uncertain whether the salvagers can immediately be taken to the ship by helicopter. Last week, Smit Salvage was already involved in the successful salvage operation in the Suez Canal last week. The Eemslift Hendrika is currenlty drifting towards the Norwegian coast without a working main engine.

According to the head of the salvage operation on behalf of the Norwegian Coast Guard, Hans-Petter Mortensholm, the Norwegian Coast Guard vessel Sortland has arrived at the ship at 12:15. That ship may be able to attach a first tow line to the Eemslift Hendrika, but this is made more difficult by the stormy winds and heavy seas with waves of ten to fifteen metres high.

According to Mortensholm, everything must be done to save the ship from destruction, as there are 350 cubic metres of heavy fuel oil and 70 cubic metres of diesel on board. This could cause problems for the environment. ‘The ship is now drifting towards the Norwegian coast and if we do nothing it will run into the shore within one to one and a half days,’ Mortensholm outlined the imminent danger.

A spokeswoman for the shipping company Amasus Shipping says that she cannot make any further announcements about the salvage at this time. The management is consulting on the situation and will make announcements later on Tuesday.

Update 6 April 13.09: Mortensholm has told Norwegian news channel NRK that one of the work boats on deck of the Eemslift Hendrika has now fallen off the ship. However, he adds that: ‘For the time being, we have chosen to prioritise the largest boat. We are first and foremost concerned about the bunker oil and this is on the Eemslift Hendrika.’

The twelve crew members were taken off board with a rescue helicopter on Monday. According to the spokesperson of the Norwegian rescue unit JRCC, the captain was injured, but he has no information about the seriousness of this. The crew was taken to the Norwegian town of Ålesund.

The first eight crew members were already taken off board on Monday afternoon. The other four initially remained on board in an attempt to stabilise the ship, but they were also taken off board later on Monday because the situation became too dangerous. These four had to jump into the sea to be picked up from there by a helicopter (see video below).

The ship was at that moment approximately sixty nautical miles (110 kilometres) west of the Norwegian coast. The Eemslift Hendrika was built in 2015, is 112 metres long and 17 metres wide.

A video of the evacuation of crew