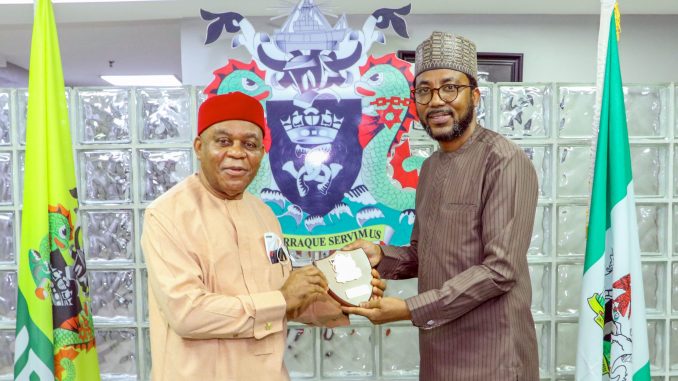 R-L: The Acting Managing Director of the Nigerian Ports Authority (NPA), Mohammed Bello-Koko presents the Authority’s plaque to the Chairman Senate Committee on Privatization and Commercialization, Senator Theodore Orji, during the committee’s oversight function to NPA Corporate Headquarters in Lagos.

The Managing Director of the Nigerian Ports Authority (NPA) Mohammed Bello Koko has stated that NPA has created the enabling environment for a well-structured inter-modal system for seamless connectivity of the waterways, rail and road transportation to foster improved service delivery in all Nigerian seaports.

Mohammed Bello Koko restated the commitment of the current management under his leadership of enthroning international standards and best practices in the handling of ships and cargo in all seaports in the country.

Bello-Koko made the remark while addressing members of the Senate Committee on Privatisation and Commercialisation led by Senator Theodore Orji, on a visit to the NPA, in line with their oversight responsibility.

According to Bello Koko, the authority has created the enabling environment for a well-structured inter-modal system for seamless connectivity of the waterways, rail and road transportation, to foster improved service delivery as well as an increase in revenue to the nation’s purse.

He noted that the various reforms rolled out by the Federal Government have had a significant positive impact on Port productivity, stressing that the dividends are evident in the areas of reduced cargo dwell time, improvement in cargo throughput, ship turn-around time and a drastic reduction in security incidents within and around the Port environs.

The NPA MD called for better synergy with Nigeria Customs Service (NCS) and other agencies of government involved in the examination and clearance of cargo, to drive efficiency in Port operations.

While expressing the appreciation of the Authority to the lawmakers for their visit, Bello-Koko assured that NPA would work tirelessly at ensuring the sustenance of service excellence across the nation’s ports.

He solicited the timely intervention of the Committee on efforts to end the perennial traffic gridlock plaguing vehicular activities along the Port access roads.

Earlier, the Chairman of the Committee, Senator Theodore Orji stated that the Committee would work collaboratively with the NPA Management with the view to resolve all bottlenecks militating against ease of doing business at the Ports.

The Acting Managing Director of the Nigerian Ports Authority (NPA), Mohammed Bello-Koko (8th right) the Chairman Senate Committee on Privatization and Commercialization, Senator Theodore Orji (9th right), top management of NPA and members of the committee during the oversight visit to NPA corporate headquarters in Lagos.