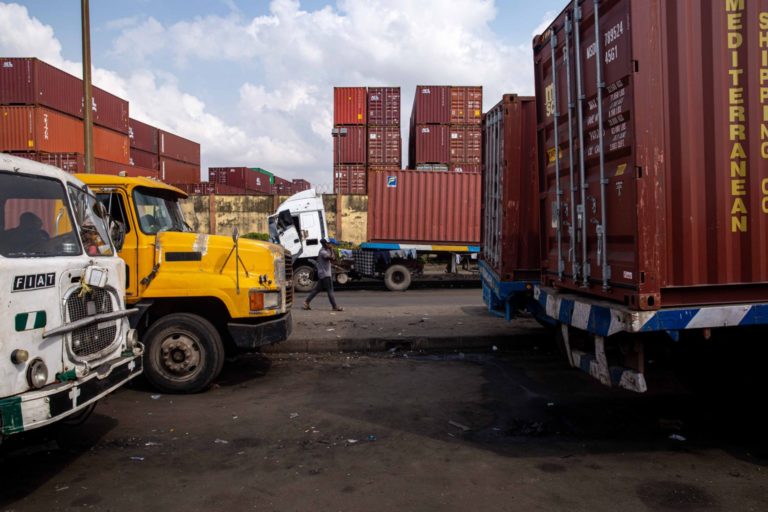 Trucks parked on the roadside waiting to get access into Tincan port in Apapa, Lagos (Photo by Benson Ibeabuchi / AFP)

Nigeria’s capacity to take advantage of a weakened currency to boost its revenue profile and bridge gaps in the balance of trade remains undermined by lingering domestic challenges, especially that of logistics, in transiting its non-oil exports.

Notwithstanding efforts by the private sector to overcome the challenges, retaliatory tariffs by neighbouring countries due to border closure by Nigeria in 2019, are also limiting the country’s capacity to improve its foreign exchange earnings.

Though the Federal Government embraces import substitution as a policy to conserve scarce, foreign exchange, President of the African Development Bank (AfDB), Akinwunmi Adesina, yesterday, described the stance as a restrictive vision that looks towards survival, instead of looking to create wealth through greater export market and value diversification.

According to the AfDB, during an event organised by the Manufacturers Association of Nigeria (MAN) as part of activities marking 50 years of the association, the result of such position is a manufacturing sector that cannot develop nor compete globally, but limits itself to “survival mode, not a global manufacturing growth mode.”

It would be recalled that the manufacturing sector has continued to complain of access to foreign exchange for critical raw materials due to the restriction imposed on certain items by the Central Bank of Nigeria (CBN).

Similarly, the forex restrictions and abrupt closure of the land borders have been attributed to be responsible for the rise in inflation, especially food prices in the last two years.

Adesina argued that instead of being consumed with the conservation of foreign exchange, the focus should shift to expanding foreign exchange through enhanced export value diversification.

Data from the National Bureau of Statistics showed that Nigeria’s total foreign trade rose to N12 trillion in the second quarter of 2021 as the country recorded an increase in exports, especially crude oil.

“The crude oil, which is the major component of export trade stood at N4.078 trillion or 80.29 per cent of total export.

“While Malaysia and Vietnam moved to “global manufacturing growth” creating massive wealth and jobs for themselves, Nigeria remains in a “survival” mode, still unable to substitute the imports of its petroleum products, while being one of the largest exporters of crude oil.

“Today, capacity utilisation of factories hovers around 40 per cent compared to a desired 70 per cent. The reality, in view of several challenges facing the industrial manufacturing sector, is that firms are moving to neighbouring countries, where there is greater macroeconomic stability, enabling environments, and much better ease of doing business.

“To be a manufacturer in Nigeria is not an easy business. You succeed not because of the ease of doing business, but by surmounting several constraints that limit industrial manufacturing,” Adesina explained.

The former minister of agriculture stated that industrial development in the country is constrained by the poor state of transport, ports and logistic infrastructure, noting that it costs $35,000 to export 100 tonnes of produce from Nigeria compared to just $4,000 in Ghana.

Lamenting that the country’s port has become revenue generation centres without support for industrial manufacturing, Adesina said: “We should not be decongesting the ports in Nigeria, we should be transforming the ports.”

He said there are various complications in the ECOWAS sub-region, adding that the border closure disrupted trade significantly.

“We still have issues at the Nigeria-Benin border where the Benin government is putting exorbitant charges on goods that should be covered by the ECOWAS Trade Liberalisation Scheme (ETLS). For every day that the Benin Republic is charging this cost, Nigerian exporters are losing,” he said.

An economist and Chief Executive Officer, Centre for the Promotion of Private Enterprise, Dr Muda Yusuf, reiterated the need to address the issue of non-tariff barriers by Nigeria’s neighbours to restrict trade in retaliation for border closure.

He also argued that the foreign exchange market is largely a consequence of CBN policy choice of a fixed exchange rate regime and administrative allocation of forex.

“There is a need to strengthen our export strategy to boost foreign exchange earnings. There is too much emphasis on demand management but very little on the creation of incentives to earn foreign exchange. This is about putting in place a robust supply-side strategy for foreign exchange.

“We should be aiming at being part of the global value chain through the identification and focus on our competitive strengths in production and services. A strong supply-side strategy would impact positively on our balance of payment position”, he added.

Also, the Senior Special Assistant to the President on Public Sector Matters and Secretary, National Action Committee on AfCFTA, Francis Anatogu, while urging businesses to exploit the opportunities in the trade deal, noted that with the currency devaluation, Nigeria’s ability to scale reduces but it improves the ability to hedge for export.

Other stakeholders, who noted that the country could generate about seven times of the $29.7 billion (about $210 billion) that the nation made last year from the export of crude oil and gas, insisted that increasing poverty, unemployment, weak economic outlook and other challenges may persist if the government fails to improve on its approach and policies.

Represented by the Secretary to the Federation, Boss Mustapha, President Muhammadu Buhari told the manufacturers that his government has a keen interest in diversifying the economy by ensuring a vibrant manufacturing sector to ensure the country exports finished goods instead of raw materials.

According to him, the nation’s economic hope lies in manufacturing, agriculture and the services sector, adding that the government has been working to address infrastructure loopholes and provide stimuli to the manufacturing sector.

Buhari also noted that the ease of doing business programme, as well as economic recovery programmes, coupled with improvement in energy, export support and operating environment would leapfrog the manufacturing sector.

MAN President, Mansur Ahmed, who also spoke at the event, stated that while the support of the government to keep the sector afloat remained an elixir, there was a need to sustain support and policies in the sector.

Ahmed noted that sustainability of programmes and policies remained necessary to enable the sector to scale up its capacity, reduce its cost of operations and improve competitiveness.

“This is especially necessary to enhance the self-sufficiency of our productive sectors, reduce reliance on imports and position or reposition our sector,” he said.

Ahmed noted that there was a need for strong commitment on the part of all stakeholders to address the lingering challenges bedevilling the manufacturing segment in the country.