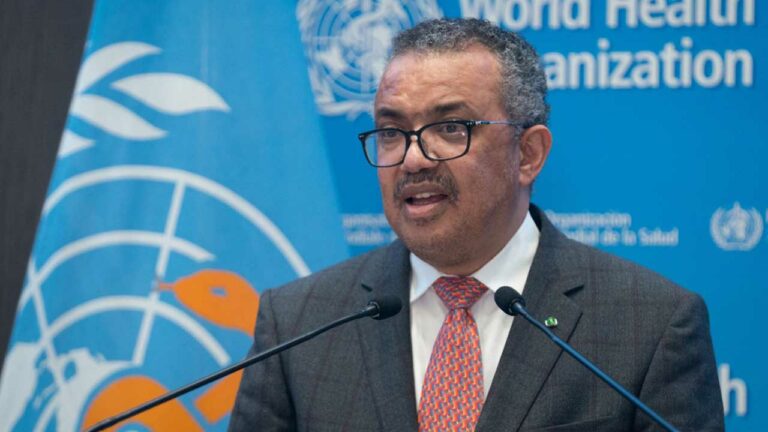 The World Health Organisation (WHO) said, yesterday, that the Omicron coronavirus variant carried a very high risk of infection as more countries closed borders, casting a shadow over economic recovery from the two-year pandemic.

A three-day special session of the World Health Assembly (WHA) kicked off on Monday to discuss pandemic preparedness and response, amid concerns about the spread of the new Omicron variant. The WHA normally meets in May but a special session was called for in a decision adopted by the WHO member states.

A draft resolution currently under review stops short of calling for the establishment of a “pandemic treaty” or a “legally binding instrument”, which proponents say would beef up the international response to pandemics.

The WHO, therefore, advised its 194-member nations that any surge in infections could have severe consequences, but said no deaths had yet been linked to the new variant.

“Omicron has an unprecedented number of spike mutations, some of which are concerning for their potential impact on the trajectory of the pandemic,” the WHO said.

“The overall global risk related to the new variant of concern Omicron is assessed as very high. Further research was needed to understand Omicron’s potential to escape protection against immunity induced by vaccines and previous infections, it added.

An infectious disease expert from South Africa, where scientists first identified Omicron, said it was too early to say whether symptoms were more severe than previous variants, but it did appear to be more transmissible. Scientists have said it could take weeks to understand the severity of Omicron.

The WHO has backed international efforts to forge a treaty setting out global responses to pandemics, as member states began a three-day conference. WHO chief, Tedros Adhanom Ghebreyesus, said the fair distribution of vaccines must be a central part of any such agreement.

“Vaccine equity is not charity, it’s in every country’s best interest,’’ Tedros said in his opening remarks yesterday.

A legally binding treaty would in his view provide the best foundation for jointly combating future pandemics, in spite of whatever compromises had to be made to make such an agreement happen.

“Now is the time for all countries to make their choice to invest in a healthier, safer and fairer future,’’ he said.

Tedros lamented that so far 80 per cent of vaccine doses had been sent to the world’s 20 wealthiest nations.

In a separate statement released earlier, the WHO said donations of COVID-19 vaccines to developing countries must be better organised, pointing out that currently many doses were handed out ad-hoc and with a dwindling shelf life.

In Africa, just 6.6 per cent of the population were fully vaccinated against the Coronavirus, according to the African Centre for Infectious Diseases (Africa CDC).

Recall that The Guardian had last week exclusively reported that barely a paltry three per cent of the eligible population in the country have been fully vaccinated, while just about six million of the population have taken a jab of the vaccine.

The WHO had warned against countries hastily imposing travel curbs. However, bans have been introduced in recent days including by the United Kingdom, the European Union and the United States.
THE President, African Development Bank Group (AfDB), Dr. Akinwumi Adesina, yesterday announced the postponement of the 2021 Africa Investment Forum scheduled to hold between December 1 and 3 in Abidjan, Côte d’Ivoire.

In a statement issued yesterday, Adesina stated that the decision to put the forum on hold till further notice was reached after due consultations with the government of Côte d’Ivoire and the Board of Directors of the bank.

According to him, the postponement became imminent in view of the rising global travel restrictions due to the COVID-19 Omicron variant.

“Unfortunately, with rising global travel restrictions due to the COVID-19 Omicron variant, and heightened concerns for health and safety, it is necessary, regrettably, to postpone the event. The health and safety of everyone come first. We sincerely regret all inconveniences to our esteemed and expected heads of state and government, participants, project sponsors, investors and government delegations.”

The forum provides for a virtual segment where about 2,000 delegates meet for a healthy conversation on the options before Africa just as 250 participants will be present physically for deal-focus boardroom meetings and other engagements that could potentially change the fate of the African market, creating jobs for thousands of people and open vista of new wealth-creating opportunities.

It has, however, warned that the dreaded variant may be on its way to Nigeria in view of the number of countries that have currently reported the detection of this variant.

Meanwhile, with effect from Friday, December 3, passengers arriving in Nigeria would be required to do a PCR test 48 hours before departing and also do day two and day seven PCR tests on arrival, while they will be required to self-isolate for seven days.

Also, passengers that are going out of Nigeria will be required to either show proof of COVID-19 vaccination or provide a negative PCR test taken 48 hours before departure and these conditions will apply to diplomats as well.

In addition, the Federal Government yesterday reminded all Federal Government employees that starting from Wednesday, December 1, they would be required to show evidence of being vaccinated against COVID-19, or a negative PCR result done within 72 hours before being allowed into their offices.

National Incident Manager, Dr Mukhtar Muhammad, who announced these at the briefing of the Presidential Steering Committee (PSC) on COVID-19 in Abuja, observed that this was in reaction to the global concern about the new COVID-19 variant discovered in Botswana and announced by South Africa last week.

He said: “As of today, there has not been any detected case and the PSC has continued to review our risk of this latest information and take every necessary step to stop it from being imported into the country. We have taken far-reaching proactive measures to minimise and mitigate this possibility. Consequently, the PSC will be issuing a travel guideline document today (Tuesday), but let me highlight the contents of this travel guideline.

The PSC will ensure that there is enforcement of passengers who arrive and refuse to take tests through suspension of their passports and prosecution or both. Furthermore, we’ll be increasing our surveillance at the ports of entry into the country, intensify testing and contact tracing, and optimise sequencing capacity.”

Muhammad noted that one of the reasons driving COVID-19 and the emergence of variants of concern is the promotion of vaccine nationalism, which refers to the pervasive inequality at a global level that makes rich countries to be able to procure vaccines for their own citizens through direct agreements with pharmaceutical companies, while low and middle countries are lagging behind.

“The slower and delayed vaccination rollout in low and middle income countries has left many of the citizens vulnerable to COVID-19 variants. It leads to new surges of infection and also slows rates of recovery. Whereas most of the developed countries have already vaccinated over 60 per cent and above of their populations, most developing countries are below five per cent.”

Also speaking, the Executive Director of the National Primary Healthcare Development Agency (NPHCDA), Dr Faisal Shuaib, noted that to ease access to COVID-19 vaccines by government employees, it has commenced office-to-office vaccination in federal Ministries, Departments and Agencies (MDAs) so that employees who are yet to be vaccinated will find a vaccination site around their offices to register and get vaccinated and also prevent the excuse of having to leave their place of employment to a distant vaccination site.

He observed that from time to time, civil servants will be picked at random to check or assess their COVID-19 antibody titles to detect persons who may have fraudulently acquired the vaccination cards without vaccination.

Shuaib warned that anyone who has been found to have fraudulently obtained the vaccination card without vaccination would be handed over to law enforcement authorities.

Shuaib stated that as of yesterday, 6,504,043 eligible persons have received the first dose of the COVID-19 vaccine in Nigeria, while 3,586,812 persons have been fully vaccinated against COVID-19.

He said: “So far, we have over 30 million doses of the vaccines at hand, while another 60 million has been committed before the first quarter of 2022.

“We have been monitoring how states have been intensifying the ramp-up of COVID-19 vaccination. We have ranked them according to performance. As of today, the top five states are Ogun (first), Nasarawa (second), Oyo (third), Osun (fourth) and Ekiti (fifth).

Earlier, the chairman of PSC and Secretary to the Government of the Federation (SGF), Boss Mustapha, reiterated that the vaccine mandate would come into effect fully tomorrow. He implored every Federal Government worker and in essence, all Nigerians and residents to get vaccinated.

Mustapha noted that with the developments around the world, people will not be able to travel without their verified vaccination cards.

Mustapha further said that the PSC was aware of some travellers who circumvent travel protocols by providing fake COVID-19 test results, permit to travel certificates or declaring fake vaccination status at points of entry. He added that “the weight of the law is heavy and will come hard on these people.”

The United Nations World Tourism Organisation (UNWTO) has said Africa recorded a 74 per cent drop in tourism in 2021 due to COVID-19 as the global tourism sector will likely experience two trillion dollars in lost revenue.

According to the latest forecast by UNWTO yesterday, the same amount was lost in 2020, making it one of the sectors hit hardest by the health crisis. The UN tourism body called the sector’s recovery “fragile” and “slow.”

Despite recent improvements, the report warned that demand for travel could be further affected by uneven vaccination rates around the world and new COVID-19 strains, which had prompted new travel restrictions in some countries.

According to the latest UNWTO data, international tourist arrivals are expected to remain 70-75 per cent below 2019 levels in 2021, a similar decline as in 2020.

Although a 58 per cent increase in tourist arrivals was registered in July-September, 2021 compared to the same period in 2020, this remained 64 per cent below 2019 levels, the UN body stated.