Why shipping might be about to get a little bit slower 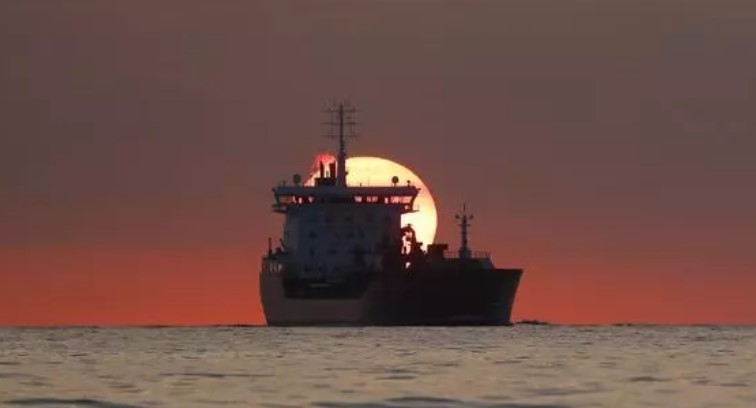 If shipping is the beating heart of global trade, its pulse is about to get slower.

Faced with uncertainty about which fuels to use in the long term to cut greenhouse gas emissions, many shipping firms are sticking with ageing fleets, but older vessels may soon have to start sailing slower to comply with new environmental rules.

From next year, the International Maritime Organization (IMO) requires all ships to calculate their annual carbon intensity based on a vessel’s emissions for the cargo it carries – and show that it is progressively coming down.

While older ships can be retrofitted with devices to lower emissions, analysts say the quickest fix is just to go slower, with a 10% drop in cruising speeds slashing fuel usage by almost 30%, according to marine sector lender Danish Ship Finance.

“They’re basically being told to either improve the ship or slow down,” said Jan Dieleman, president of Cargill Ocean Transportation, the freight division of commodities trading house Cargill, which leases more than 600 vessels to ferry mainly food and energy products around the world.

Supply chains are already strained due to a surge in demand as economies rebound from lockdowns, pandemic disruptions at ports and a lack of new ships. If older vessels move into the slow lane as well, shipping capacity could take another hit at a time when record freight rates are driving up inflation.

At the moment, only about 5% of the world’s fleet can run on less-polluting alternatives to fuel oil, even though more than 40% of new ship orders will have that option, according to data from shipping analytics firm Clarksons Research.

But the new orders are not coming in fast enough to halt the trend of an ageing fleet across all three main types of cargo vessels: tankers, container ships and bulk carriers, the data provided to Reuters by Clarksons Research shows.

“Some ship owners have preferred to buy second-hand vessels because of the uncertainties around future fuels,” said Stephen Gordon, managing director at Clarksons Research.

A tall order for shipping

Orders for new container ships surged to a record high in 2021 and are still coming in at a healthy clip this year, but as the appetite for new tankers and bulk carriers is much lower, the current order book across all three types of the vessel only stands at about 10% of the fleet, down from over 50% in 2008.

Shipping companies are responsible for about 2.5% of the world’s carbon emissions, and they are coming under increasing pressure to reduce both air and marine pollution.

The industry’s emissions rose last year, underlining the scale of the challenge in meeting the IMO’s target of halving emissions by 2050 from 2008 levels. The organization is now facing calls to go further and commit to net zero by 2050.

Some shipping companies are testing and ordering vessels using alternative fuels such as methanol. Others are developing ships that can be retrofitted for fuels beyond oil, such as hydrogen or ammonia. There’s even a return to wind with vast, high-tech sails being tested by companies such as Cargill and Berge Bulk. read more

But many of the potential low-carbon technologies are in the early stages of development with limited commercial application, meaning the majority of new orders are still for vessels powered by fuel oil and other fossil fuels.

Of the vessels on order, more than a third, or 741, are set to use liquefied natural gas (LNG), 24 can be driven by methanol and six by hydrogen. Another 180 have some form of hybrid propulsion using batteries, Clarksons data shows.

Many shipping firms are hedging their bets mainly because prolonging the life span of vessels is cheaper and lower risk than new builds. They also gain breathing space while waiting for the winning new technologies to become mainstream.

“We have a clash between an industry that is very long-term investment oriented and a very fast pace of change,” said John Hatley, general manager of market innovation in North America at Finnish marine technology company Wartsila (WRT1V.HE).

Cargill says that as of now it doesn’t expect to have many new-build ships in its fleet, instead fitting energy saving devices to older vessels and prolonging their use, while there’s still uncertainty about future technology.

They’re not alone, with more than a fifth of global shipping capacity fitted with such devices, according to Clarksons.

Devices include Flettner rotors, tail spinning cylinders that act like a sail and let ships throttle back when it’s windy, or air lubrication systems that save fuel by covering the hull with small bubbles to reduce friction with seawater.

“The next generation of fuel oil ships will be much more carbon efficient, they will be able to transport the same amount of cargo emitting only half of the emissions that they did over a decade ago,” he said.

Shipping firms are set to come under growing pressure to comply with targets set by the IMO, which will rate the energy efficiency of ships on a scale of A to E, as the ratings will have a knock-on effect when it comes to finance and insurance.

In 2019, a group of banks agreed to consider efforts to cut carbon emissions when lending to shipping companies and established a global framework known as the Poseidon Principles.

“Lending decisions on second-hand ships are going to become an issue on older tonnage,” said Michael Parker, chairman of Citigroup’s global shipping, logistics and offshore business, adding that environmental factors would be taken into account when lenders decided whether to refinance vessels.

“Second-hand ships will continue to get financing, provided that the owner is doing the right things about keeping that vessel as environmentally efficient as possible,” he said.

One early adopter of new technology is shipping giant A.P. Moller-Maersk . It has ordered 12 vessels which can run on green methanol produced from sources such as biomass, as well as fuel oil as there is not yet enough low carbon fuel available.

The Danish company doesn’t intend to use LNG because it is still a fossil fuel, and it would prefer to shift directly to a lower carbon alternative.

Wartsila, meanwhile, is launching an ammonia-fueled engine next year, which it says is generating a lot of interest from customers, as well as a hydrogen engine in 2025.

Ship owners are facing a lot of uncertainty over how to “future proof” their fleets and avoid regretting investment decisions now within a couple of years, said Wartsila’s Hatley.

“They would rather wait for maybe the whole life of the ship of 20 years, but that’s even more uncertain now because of the pace of change.”