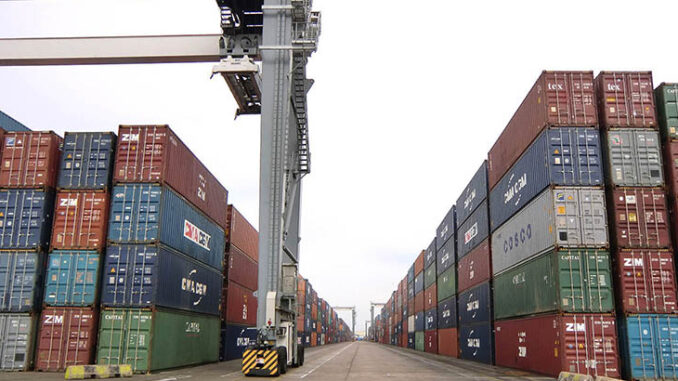 Importers’ customs agents have vowed that they would not pay any demurrage as cargo handling operations yesterday were completely paralysed at Tin Can Island Container Terminal (TICT) located at Tin Can Island Port Complex in Apapa, Lagos, as workers of TICT down their tools over poor conditions of service.

Importers’ customs agents and truck drivers who had earlier reported at the terminal were prevented by the angry workers who carried placards with various inscriptions, denouncing their inhuman treatments by the management of TICT, from entry.

The distrusted importers’ customs agents were seen hanging around the gate of the terminal ruing and counting the negate effect of the strike – huge demurrage – on their cargo.

Some of the messages on the placards which were dumped at the entrance gate of the terminal at the popular Second Gate of Tin Can Island Port read thus: Pay us off, the racism MD must go! HR must go! ER must go! Raphael must go! Samuel must go! Legal woman must go! No more clocking machine! Public Holiday N25,000;  No more code of conduct!

Some of the protesting workers who spoke to PortNews reporter at the scene of the protest said the protest became necessary and the last option considering the ill-manner ways they are being treated by the management of TICT since the present managing director came to office.

They alleged that the managing director is a racist whose mission and act annihilate Nigerian workers of the terminal by denying them their rights and welfare packages. The workers maintained that their take-home pay is the worst when compared with other terminals in the sector.

The protesting workers stressed that the clocking machine in the terminal is a racist tool being used by the TICT management to enslave them, restricting their freedom. They noted that since they had explored all dialogue methods to let the management see the need to improve their conditions of service and which the management failed to comply with, the protest was the option to press for their demands and let the industry authorities know.

They said that they would not back down until their demands – better conditions of service – are met.

All efforts to get the reactions of the TICT management particularly the terminal manager proved abortive as all the stern look security operatives manning the gate prevented and harassed people to come into the terminal.

Counting their losses, many customs agents who were obliged to speak to our reporter strongly condemned the strike and the TICT management for maltreating their workforce. They noted that the strike had caused them heavy losses in terms of demurrage that would accrue to their cargo. They expressed fear that shylock shipping companies might take advantage of the situation.

They emphatically said that they would not accept a situation whereby the TICT management would ask them to pay demurrage on their cargo already trapped in the terminal no matter the number of days the strike might last.

A customs agent who identified himself as Goddy expressed distraught that port workers, of TICT status, are still being paid N25,000 per month in this bad economic situation in the country taking into account huge the huge profits which are being made by the organisation daily.

“Whatever may be their differences, customs agents must not be the scapegoat by asking us to pay demurrages, no matter how long the strike is. We are not going to accept this. The regulators, the Nigerian Ports Authority (NPA) and the Nigerian Shippers’ Council, must take note and do what is necessary to stand with Nigerian importers as shipping lines will likely take advantage of the strike to milk the importers too. Employers must learn to respect their workers,” he submitted.