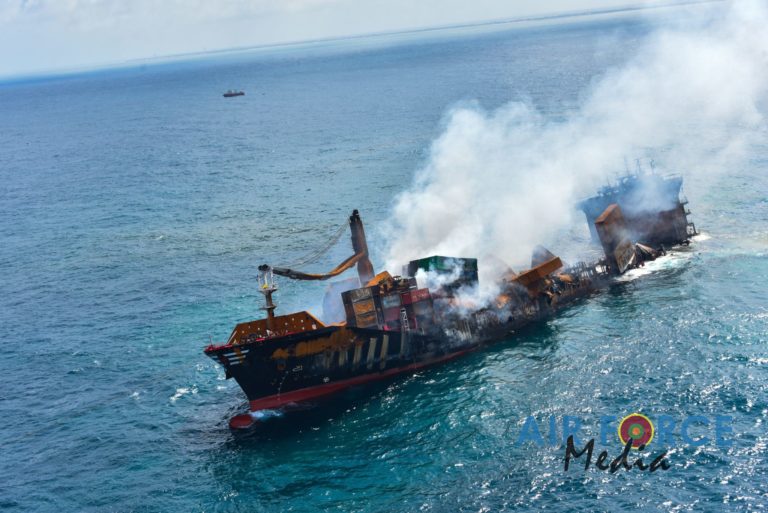 The MV X-Press Pearl has partially sunk off the coast of Sri Lanka during an attempt to tow the vessel to deeper waters, the ship’s operator has confirmed.

Salvors boarded the vessel today and successfully attached a tow wire to the bow of the burned out ship, but efforts to tow it failed. The ship’s aft is now touching the seabed at a depth of 21 meters, X-Press Feeders said in its update.

“As of 1500 Sri Lanka time, the forward area of the vessel remains afloat with smoke coming out of Cargo Holds No 1 and 2,” the update said.

Efforts to extinguish the fire on board have been ongoing since it was first reported May 20 one day after the X-Press Pearl arrived at an anchorage approximately 9.5 miles off the coast of Colombo with a container leaking nitric acid. While dousing the fire appeared to be successful initially, the fire exploded in intensity last week and all 25 crew members and a salvage team from SMIT were evacuated.

All 25 crew members were eventually evacuated safely, although two suffered injuries but are expected to recover fully. One also tested positive for COVID-19.

Prior to its partial sinking today, all salvage team members were evacuated from the vessel due to safety concerns.

“An inspection team were able to board the vessel on the afternoon of Tuesday, June 1, and reported the engine room flooded. There are now concerns over the amount of water in the hull and its effect on the ship’s stability. Efforts to make a connection for towing failed after several attempts due to the tug’s movement caused by the swell. The operation was aborted for safety reasons,” X-Press Feeders reported today prior the sinking.

The Sri Lankan Navy and Indian coastguard have remained on scene responding to the incident.

The X-Press Pearl was loaded with 1,486 containers, including 25 tons of Nitric Acid and other chemicals which it had loaded at the port of Hazira, India on May 15, the Sri Lankan Navy reported previously. Preliminary investigations indicate the fire started due to a chemical reaction of the hazardous cargo. It also had 297 tonnes of Heavy Fuel Oil and 51 tonnes of Marine Fuel Oil on board.

Before arriving in Sri Lankan waters, X-Press Pearl underwent discharge and loading operations at Hazira Port in India and Hamad Port in Qatar before continuing on its planned journey to Colombo.

“Applications had been made to both ports to offload a container that was leaking nitric acid but the advice given was there were no specialist facilities or expertise immediately available to deal with the leaking acid,” an earlier update said.

Sri Lankan officials fear the sinking of the vessel would impact local fisheries and create an environmental disaster along the shoreline. The government on Wednesday suspended fishing along a 50-mile stretch of the island’s coastline, affecting 5,600 fishing boats, Reuters reported. Article gcaptain.com