Act now or pay later: The costs of climate inaction for Ports and Shipping 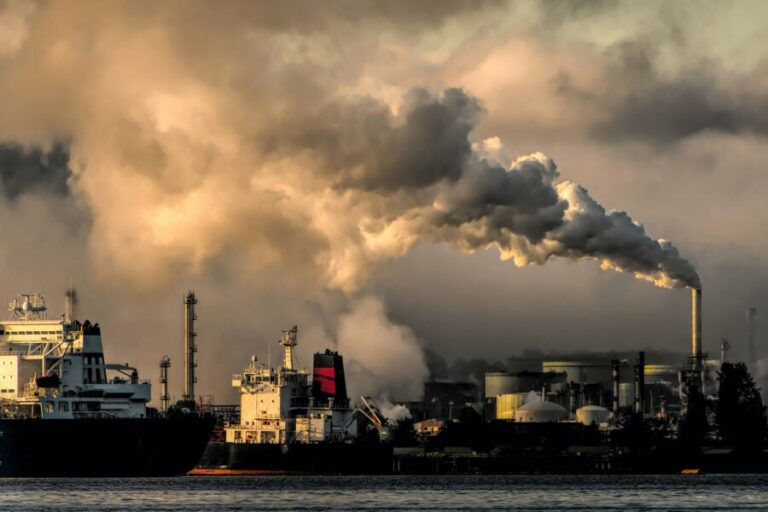 Global seaborne trade has grown enormously in the last 25 years, now accounting for roughly 80% of the total volume of global trade each year. Global trade will likely continue to grow in the future, as will the volume of goods transported by sea.

At the same time, the shipping industry is under growing threat from climate change. Projected increases in global temperatures are expected to cause or intensify several climate-related hazards that can pose considerable physical risks to the shipping and port industries.

This report summarizes existing evidence and estimates of the impacts and costs of climate-related hazards, as well as expands on these findings to provide new estimates of the potential global costs of climate change for shipping and ports.
Without further action to reduce emissions, climate change impacts could cost the shipping industry an additional US$ 25 billion every year by 2100. To put these estimates into context, total operating profits for the global container shipping industry averaged less than US$ 20 billion per year during 2018-2020. It’s also important to note that data on this topic is sparse and these estimates of added costs only reflect port damages and disruptions, meaning future costs overall could be far higher than estimated here. 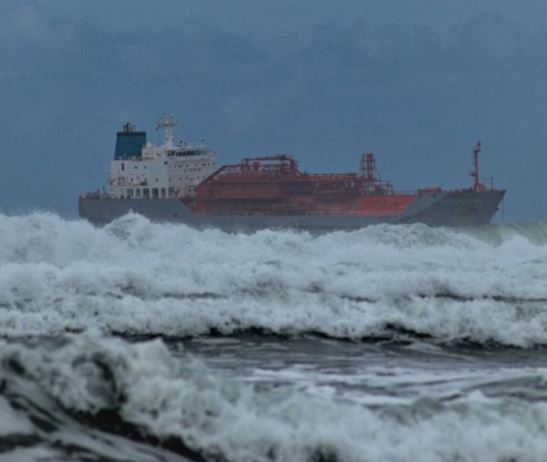 The potentially high costs underscore the importance of strategies for preventing climate change, particularly by reducing greenhouse gas (GHG) emissions from the shipping sector itself. Powered by carbon-intensive bunker fuels, the shipping industry currently accounts for roughly 20% of global emissions from the transportation sector.
The findings from this report should encourage governments and shipping leaders to act now to reduce emissions and avoid the worst impacts – or pay later.

ES-1 IN WHAT WAYS DOES CLIMATE CHANGE IMPACT THE SHIPPING AND PORT INDUSTRIES?
The report starts by taking stock of a growing body of research focused on climate-related impacts to shipping and ports, highlighting examples of how much different types of climate hazards have cost around the world.
Impacts from Sea Level Rise and Tropical Storms
Climate change is likely to cause global sea levels to rise and increase the intensity of tropical cyclones through increased wind speeds, wave heights, and rainfall intensity. Below are several examples of how storm-related losses have impacted the shipping industry and seaports in recent years, as well as results from analyses grappling with this question.

Losses from Damages to Port Infrastructure
•Damage estimates to US ports from previous hurricanes range from US$ 46 million for Hurricane Florence in 2018 to about US$ 2.2 billion for Hurricane Katrina in 2005.
•One study looks at the Hurricane Katrina damages to the Port of Mobile in Alabama. If sea level and storm surge had been as high as some 2100 projections, the study estimates that the millions of dollars in damage would have been 5.5 times larger.
Losses from Disruptions to Port Operations
•Economic loss estimates due to previous storm-related disruptions range from US$ 10 million at the Port of Shanghai, caused by a 2-day disruption due to Typhoon Haikui in 2012, to US$ 65 million at the Port of Dalian, caused by a 5-day disruption due to Typhoon Lekima in 2019.
•An analysis of storm-related disruptions across 74 ports in 12 countries found that an additional meter in storm surge height of 10 meters per second in wind speed is associated with a 2-day average increase in the duration of the disruption. 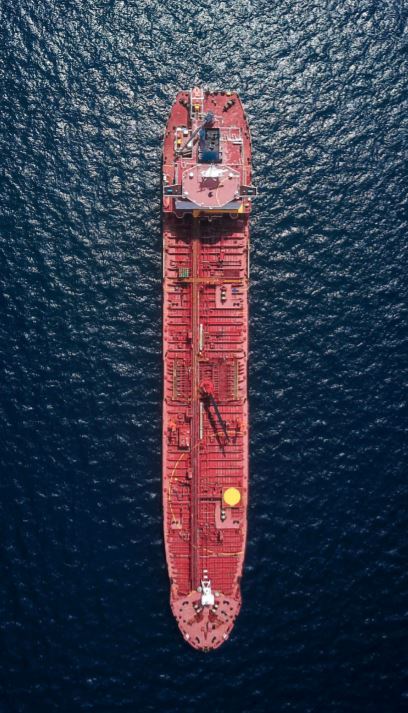 Losses from Vessel Incidents at Sea
•Weather-related conditions were responsible for at least 20% of the roughly 400 total vessel losses that occurred worldwide from 2015-2019.
•Total vessel loss incidents over these five years have resulted in the death at sea of 142 crew members, many due to extreme weather events.
Adapting to Avoid Losses
•For ships at sea, stronger storms will require adaptation through re-routing, which increases delays and operating costs. For a containership consuming 150 tons of fuel per day, each additional day at sea can cost roughly US$ 75,000.
•Most research on port adaptation costs has focused on elevation approaches, with unit costs ranging from US$ 30 million to over US$ 200 million per km2 of the port area.
Impacts from Inland Flooding and Droughts
Changing inland precipitation patterns, including increased risks of flooding and drought, can have indirect impacts on the maritime sector through supply chain effects.
•Record water levels on the Mississippi River in 2019 disrupted this key transport network for exporting US agricultural goods, causing losses valued at almost US$ 1 billion.
•In the same year, severe drought in the Panama Canal region required limits on through traffic that has been estimated to cost global shipping between US$ 230 million and US$ 370 million.
Impacts from Rising Temperatures and Extreme Heat Events
Extreme heat can cause substantial damage to shipping vessels and port infrastructure, as well as disrupts port operations.
•Impacts on port infrastructure include stress on cooling systems and metal port structures, such as container handling cranes and warehouses.
•In 2009, heatwaves in Australia shut down sections of the Port of Melbourne for 3 days, resulting in productivity losses due to work stoppages.
Impacts due to Climate Change’s Effect on Global Economic Activity
Global maritime trade activity is strongly connected with the health of the global economy. Slower global economic growth due to climate change is therefore likely to constrain the growth of maritime trade; however, estimates of these climate impacts on global trade and maritime shipping are generally lacking.

ES-2 HOW LARGE WILL THE ECONOMIC EFFECTS OF CLIMATE CHANGE BE ON THE SHIPPING AND PORT INDUSTRIES IF ACTIONS ARE NOT TAKEN TO REDUCE EMISSIONS?

Building on the existing evidence and findings, it is possible to draw additional conclusions about some of the potential future economic impacts of climate change on the maritime shipping and port industries.
Estimating the economic costs of climate change requires analyzing projections of future temperature changes and the resulting hazards. To the extent possible, this report uses model-based scientific projections of these hazards, which are based on commonly used Representative Concentration Pathway (RCP) scenarios and assumptions. These scenarios range from the “worst-case” RCP8.5 scenario, which assumes no action on emissions, to the “best-case” RCP2.6 scenario, which assumes the most ambitious action to limit future emissions.
Costs of Storm-Related Port Damages and Disruptions
The report examines and approximates these future costs for ports and shipping by first considering scenarios in which no adaptation measures are taken to protect ports against rising seas and stronger storms.
The analysis includes two types of impacts caused by a combination of sea-level rise and stronger storms:
(1)storm damages to port infrastructure and
(2)storm-related port disruptions. Disruption costs include:
a.the economic losses incurred by ports, shippers, and carriers due to full or partial port closures and
b.costs to shipping customers due to resulting shipping delays.
As shown in Table ES-1, costs were estimated for two selected years – 2050 and 2100 – assuming a worst-case climate change scenario (RCP8.5).
Under current conditions, global average annual storm damages to ports are estimated at roughly US$ 3 billion. By 2100, the additional annual damages and port disruption costs are projected to be up to US$ 25.3 billion.

Port Adaptation Costs
Next, the report estimates the costs of adapting ports to avoid the previously described damages and disruptions, focusing on port elevation as the adaptation approach. Using the same combination of sea-level rise and storm surge height assumptions for the RCP8.5 scenarios, the analysis estimates the cost of elevating all current port areas globally by the same total amount.
As shown in Table ES-2, the current global investment cost required to protect all ports against the increase in sea level rise and storm surge expected by 2100 is estimated to be up to US$ 205 billion. On an annualized basis (assuming a 3% interest rate and 80-year repayment period) these costs range from US$ 4 – 6.8 billion per year.

As an example, when the estimation approach is applied specifically to the Port of Los Angeles, annual costs to elevate the port against sea-level rise projections for 2100 (RCP8.5) are expected to be roughly US$ 100 million per year. These annual expenses would represent roughly one-third of the port’s net available revenue in 2020.
Loss in Future Maritime Trade due to Climate Change Impacts on the Global Economy
In addition to direct impacts from climate hazards, the shipping and port industries are likely to be indirectly affected by climate change through its negative impacts on the global economy. Under the baseline scenario without climate change, total trade volume is projected to grow from 11.5 billion tons in 2020 to almost 120 billion tons in 2100 (assuming trade continues to grow by 3% per year). The analysis estimates that maritime trade volume in 2100 under the worst-case scenario will be between 5.3 – 11.8 billion tons lower than it would be without climate change.

The analysis offers several key findings and implications, including:
•First, climate change is likely to impose billions of dollars in additional costs each year – unless significant mitigation and/or adaptation steps are taken. Added costs in 2050 are likely to double by the end of the 21st century.
•Second, the estimated costs likely understate future costs to shipping and ports for several reasons. Cost estimates are for existing port infrastructure and operations; therefore, they do not capture costs linked to future growth in the size and number of ports or in global trade volume. Additionally, they do not include cost estimates for “soft” adaptation measures, like port defence or retreat strategies, or for re-routing costs for shipping.
•Third, more detailed analyses are necessary to fully assess the potential cost savings from port adaptation.
Although the annualized cost estimates for port elevation are lower in dollar terms than the estimated increase
in damage and disruption costs for future years, these values are not directly comparable, for reasons discussed in the report.
The cost estimates developed for this report are merely a starting point for understanding how much climate change is going to cost shipping and ports stakeholders. It’s clear that actions now to reduce emissions can help avoid the worst impacts and ensure a safer, stronger shipping industry around the world.

Get the Full Report