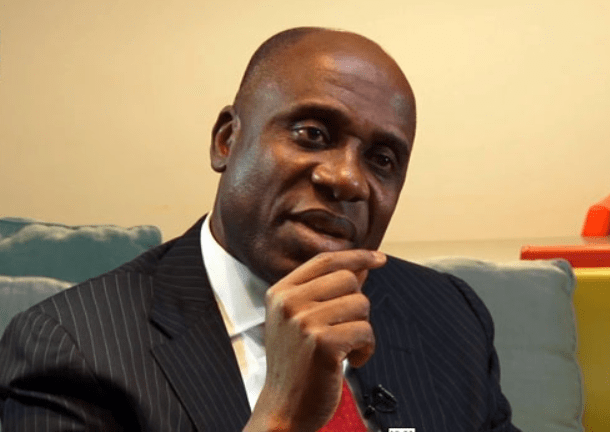 The Minister of Transportation, Mr. Rotimi Amaechi, has said that despite successes recorded in ensuring efficiency in the ports in Nigeria, several challenges still confront efforts to ensure efficiency in their activities.

Specifically, Amaechi who spoke at the “Roundtable discussion Agenda,” organised by the Convention on Business Integrity (CBI) and the Maritime Anti-Corruption Network (MACN), in Abuja, admitted that red tapes, rent-seeking, corrupt demands, human and vehicular congestion and illegal charges remained critical issues to be resolved.

Speaking on the theme: “A Maritime Sector Fit for Purpose,” the minister, who was represented by the Permanent Secretary in the ministry, Dr. Magdalene Ajani, however, stated that port users are now able to demand, track and ensure great compliance with standard operating procedures by government agencies.

He explained that this has led to a reduction in incidences of corruption and corrupt demands, as it relates to goods clearance as well as strengthening the capacity of government to establish compliance systems.
With collaboration from civil society groups and other stakeholders like the MACN, Amaechi noted that the Nigerian maritime sector was poised to further institutionalise its reforms.

By doing so, the minister stressed that Nigeria would become strategically positioned to benefit from the Africa Continental Free Trade Area (AfCTA) and reclaim its pride of place among West African maritime states.
“It is important to note that despite these successes, challenges of port administration are still enormous and include excessive delays in import and export processes, red tape, rent-seeking, corrupt demands, human and vehicular congestion in and around the ports and illegal charges leading to the high cost of business operations,” he explained.

Thus, the minister stated that the momentum and gains achieved in ports administration will greatly depend on institutionalising a system whereby the operational gains are protected, adding that such a system demands a robust compliance function to ensure that the maritime sector remains fit for purpose.

To this end, he pointed out that the compliance function within relevant regulatory institutions remains the critical factor that will further enhance the ports agency’s operations in Nigeria’s maritime sector.

Their role, he said, is to ensure that the personnel of the respective agencies operate with integrity and adhere to applicable laws, regulations and internal policies in the discharge of their responsibilities in Nigerian ports.
“Achieving this goal definitely requires the support and political will of institutional leaders and key decision-makers that play key roles in the maritime sector,” he stated.

In his comments, the Managing Director of the Nigerian Ports Authority (NPA), Mr. Mohammed Bello-Koko, who was represented by the Head, Abuja Liaison office of the authority, Mr. Edward Kabiru, explained that corruption was the totality of actions and inactions that make the maritime sector unfit for purpose.

He noted that as the entry point to the national economy, Nigerian ports play a vital role in determining the fitness or otherwise of the overall economy, explaining that ports should be in the vanguard of efforts geared towards the elimination of corruption.

He added that a lot of the transformational initiatives being implemented at the Nigerian ports at the moment take cognisance of the need for transparency and openness in their operations.
“Our vision to be the maritime logistics hub, providing sustainable port services in Africa is tied to this imperative of elimination of corruption. We understand that Nigeria has the greatest opportunity in Africa as the largest black nation,” he stated.

The NPA boss stated that returning the economy to the right track will be largely dependent on the anti-corruption fight in Nigeria, noting that the authority has been collaborating with other agencies on projects that will curtail corruption in the ports.

“Every agency has to play a role to infuse integrity, accountability and transparency in all dealings to ensure that the interactions are done with due diligence in order to curb corruption,” he stated.

Also, the Chairman of the Independent Corrupt Practices and Other Related Offences Commission (ICPC), Prof. Bolaji Owasanoye (SAN), who was represented by an Assistant Director in the organisation, Mr. Jimoh Sulahiman, pointed out that the maritime industry represents a goldmine to Nigeria, with an economy that is largely import-dependent.

He explained that the turnaround time of business and cargoes are key measurements of efficiency and the basis for measuring performance, saying that pervasive official inhibitions, mismanagement, lack of integrity and corruption in these ports were being tackled.

He added that the ICPC has the mandate to mobilise citizens for corruption prevention, and for the general enforcement of Nigeria’s anti-corruption law with the support of stakeholders which started in 2011.

At the time, he said that ICPC met decaying infrastructures, policy and regulatory challenges, overlapping functions, corrupt practices, absence of synergy and duplication of roles among government agencies operating at the ports.

He said that because the use of port facilities is competitive, officials tended to be so much under pressure to cut corners, adding that this became inimical to Nigeria’s national image and prestige.

Owasanoye stated that ICPC has now engineered stronger collaboration and support for reforms and transparency among agencies, operational reports and external stakeholders.

Earlier, in her address, Head, Technical Unit on Governance and Anti-Corruption Reforms (TUGAR) Mrs. Jane Onwumere, noted that the stakeholders’ collaboration seeks to develop strategies to sustain the successes achieved so far.