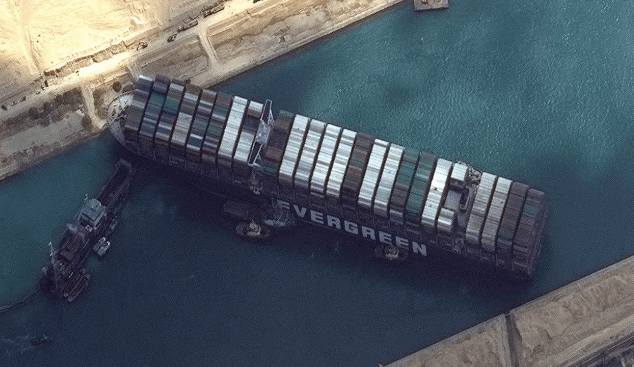 Ever Given, blocking the Suez Canal

The firm said a Dutch rescue team from Smit Salvage had confirmed that two additional tugs would arrive on March 28 to assist in refloating the ship.

“The focus is now on dredging to remove sand and mud from around the port side of the vessel’s bow,” BSM said in a statement.

A specialised dredger that can move 2,000 cubic metres of material per hour arrived on Thursday, and arrangements are being made for high-capacity pumps to reduce water levels in the container ship’s forward void and bow thruster room, the statement added.

Initial investigations suggest the vessel was grounded because of strong wind and rule out any mechanical or engine failure as the ship was transiting the canal on Tuesday with two canal pilots on board, BSM said.

It said the 25 crew of the ship, all Indian nationals, remain onboard and are in good health.

Meanwhile the Panama Maritime Authority (AMP) has initiated an investigation of the events that occurred to the Panama-flagged Ever Given box ship in the Suez Canal, in order to determine the possible causes of its grounding, it said in a statement.

Preliminary reports indicate that the Ever Given, suffered engine problems that affected its manoeuvrability at approximately 0540 hrs (UTC) March 23 while transiting through the Suez Canal with two pilots on board, despite strong winds and a sandstorm. The reasons for the grounding have not yet been determined. So far there is no pollution or injuries, only some structural damage to the vessel.

Ever Given’s Technical Manager Bernhard Schulte Shipmanagement (BSM) has stated that “initial investigations rule out any mechanical or engine failure as a cause of the grounding.”

The Ever Given is one of the largest container ships in the world, built in 2018. She is 400 metres in length, about 59 metres in width, 15.7 metres of draught and has a capacity of 20,388 TEU. With these dimensions, the container walls act as sails and the vessel can be subject to gusts of wind, said the statement.