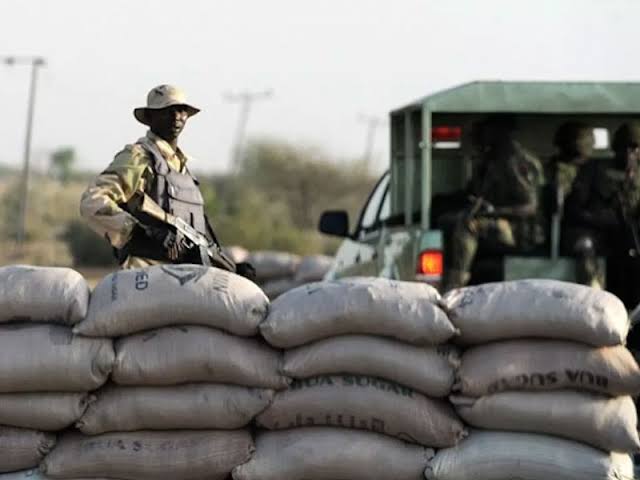 The Nigeria Customs Service has raised an alarm that other sister agencies, including Nigerian Police, Immigration, Port Health, Road Safety among others, were responsible for the duplication of checkpoints along the Badagry-Seme road, thereby frustrating trade facilitation.

A visit to the Seme Border on Tuesday revealed that not less than 30-checkpoints were mounted between Agbara in Badagry and Seme Border.

While fielding questions from journalists at a press conference on Tuesday, Seme Customs Area Controller, Compt Muhammed Bello Jibo said there are only two approved checkpoints along the axis; Agbara and Gbaji, every other one is illegal.

The customs boss absorbed his officers from such illegal acts, saying that no officer goes out without his knowledge.

According to him, taskforces have been set up to dismantle the checkpoints at various times, but like a bad rash, these agencies reappear after two days and continue to extort motorists.

Speaking, Compt Jibo said “I am the Chairman of all the security agencies along this axis, and every one of the meetings we hold here always centres on these checkpoints.

“Before I came in, there was a task force set up to ensure that these illegal checkpoints do not exist, it was headed by an army colonel. When I took over I realised that they were not doing what I wanted”

“I formed another team headed by an airforce officer and we gave him the permission to go out and dismantle any illegal checkpoints he finds along the roads, some of the checkpoints were burnt down and officials driven away.
But unfortunately, after two days, they would reappear again”

“There is no way that a customs team can venture out on illegal checkpoints or patrol without my notice, so for every checkpoint along the roads, we have told the leaders of the agencies to be accountable for them.
If we are sincere to ourselves, we must remove all these illegal checkpoints”

“The customs is to ensure trade facilitation, there was a time I saw some trucks that were stopped on the road by other agencies, I came down and met them to release the trucks because they were cleared genuinely if they have any doubts, they should come to the command.

“The whole thing boils down to the leadership, if we are sincere to ourselves, all these illegalities will stop, but where is the sincerity? And how do we facilitate trade in such an environment?” He lamented