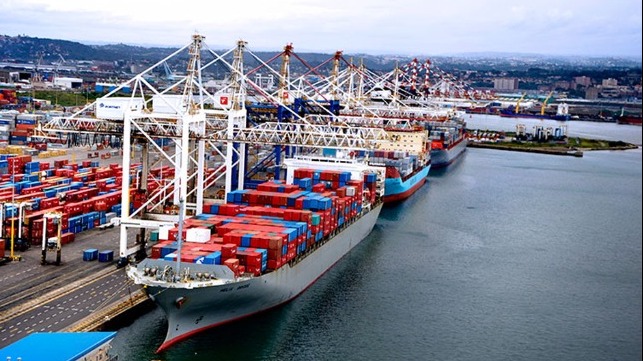 A week after civil unrest, violence, and protests disrupted operations at two of South Africa’s largest ports, Transnet is reporting that operations have resumed and that the supply chain is again moving across the country. They, however, warned that additional security and protection of critical infrastructure across the network remains in place while they remain on high alert against any further unrest.

Over the past two days, the ports of Durban and Richards Bay are reporting normalized levels of operations, with all employees having reported for their shifts. The two ports had remained officially open throughout last week’s protests, but Transnet and other operators reported that shift workers were not able to report for work due to disruptions while ships were unable to receive medical checks required before docking. Additionally, there were reports of widespread violence and looting in areas in and around Durban, although Transnet firmly denied reports and images of vandalized containers, looted and burning warehouses were on port properties. Transnet, as well as other operators, including an oil refinery and train lines, took the unusual step of declaring a force majeure.

The violence occurred after South Africa’s former president turned himself into police to serve a jail term. He had been sentenced for failing to appear before a hearing on corruption. At first, the protests were small and limited, but as they grew port operations were significantly impacted by the shutdown of the warehouses and cold storage facilities, public transport as well as the inability of trucks to enter and exit the port and move around the region.

Transnet reports that seven vessels were handled at Richards Bay, with the multi-purpose and dry-bulk terminals maintaining normal operations over the weekend. In Durban, they reported at the beginning of the week, four vessels were being serviced at Pier 2 and an additional two vessels at Pier 1. The focus is on working towards clearing the backlog caused by the disruptions in the past week.

Rail connections around Durban were re-opened Transnet said on July 16 with a total of 42 trains having passed over the line since then. They said they were still working to run more trains as they continued to try to stabilize the rail network, but they also reported that vandalism and cable theft continues in some areas of the network and that trains are being accompanied by security.

“The situation appears to be normalizing and the port terminals are back in operation,” Maersk advised clients. “We realize that our customers have been impacted with the delivery of goods to markets. We acknowledge that there have been challenges faced in terms of personal safety and mental wellbeing and our commitment remains to provide reliable and updated information towards your supply chain concerns.”

Last week, major shipping companies including Maersk and Hapag-Lloyd had said they would waive fees normally charged until the beginning of this week or until the situation stabilized. Maersk now says that it is encouraging all customers to take release of shipments to reduce port congestion, but that it has implemented revised fees primarily in Durban and Johannesburg until August 8 to provide customers that were impacted and are unable to receive their cargo time to react to the situation.